I woke early – I looked to be the first hiker stiring at 6:00am. I walked over to the privy, and then to the grocery store for coffee and juice, before heading back to the park. I was surprised to find both Savage and Champa packing up for the day. Savage was energetic – she said she wanted to make big miles and subsequently took off down trail with Champa, then Get Weird, following behind. I took my time.

I was packed up by 7:00 and made my way over to Black Santa’s tent. He was awake, but tired – he hiked just over 30 miles yesterday to catch up. McDoubles was awake as well – I decided to wait on them so the three of us could have breakfast at the grocery.

After a quick bagel sandwich, we started slowly hiking north. Having bought way too many snacks in town, we all had heavy packs. The first two miles out of town were easy – McDoubles took the lead with Black Santa and I right on his heels. We were looking forward to our hike this morning. While the trail was listed as “challenging”, we should get to enjoy to large sections of flat roadwalking – and our first one lay right ahead.

We exited the woods and found ourselves hiking alongside the Wallkill Sanctuary – a large, marshy tract of land set aside for wildlife. Black Santa and I walked down the street for a while – we couldn’t find McDoubles. Nor were we seeing any white blazes… 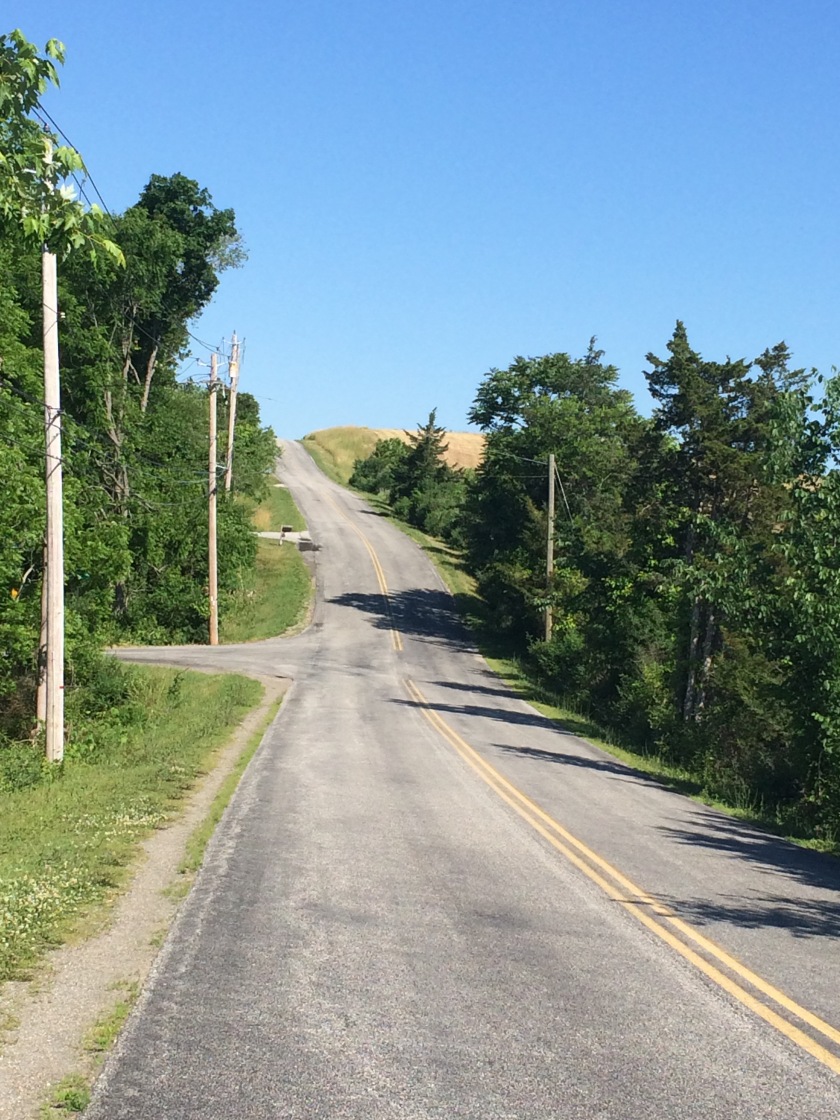 I checked my GPS app and frowned – we were almost a mile away from the AT. We turned around and headed back to the trailhead. While we walked back, I instantly noticed how hot it was getting. I could feel the heat coming from the blacktop below – I was sweating bullets and it was only 10:00am.

We slowly made it around the preserve and finally took a break at a water spigot six miles away from town. It was nearly 11:30 and we had only hiked seven miles on the day. We tried motivating ourselves to hike harder, but soon fell back into the same pace. On top of the heat, this section was indeed proving itself to be difficult – just like in PA, rocks and boulders still littered the path. 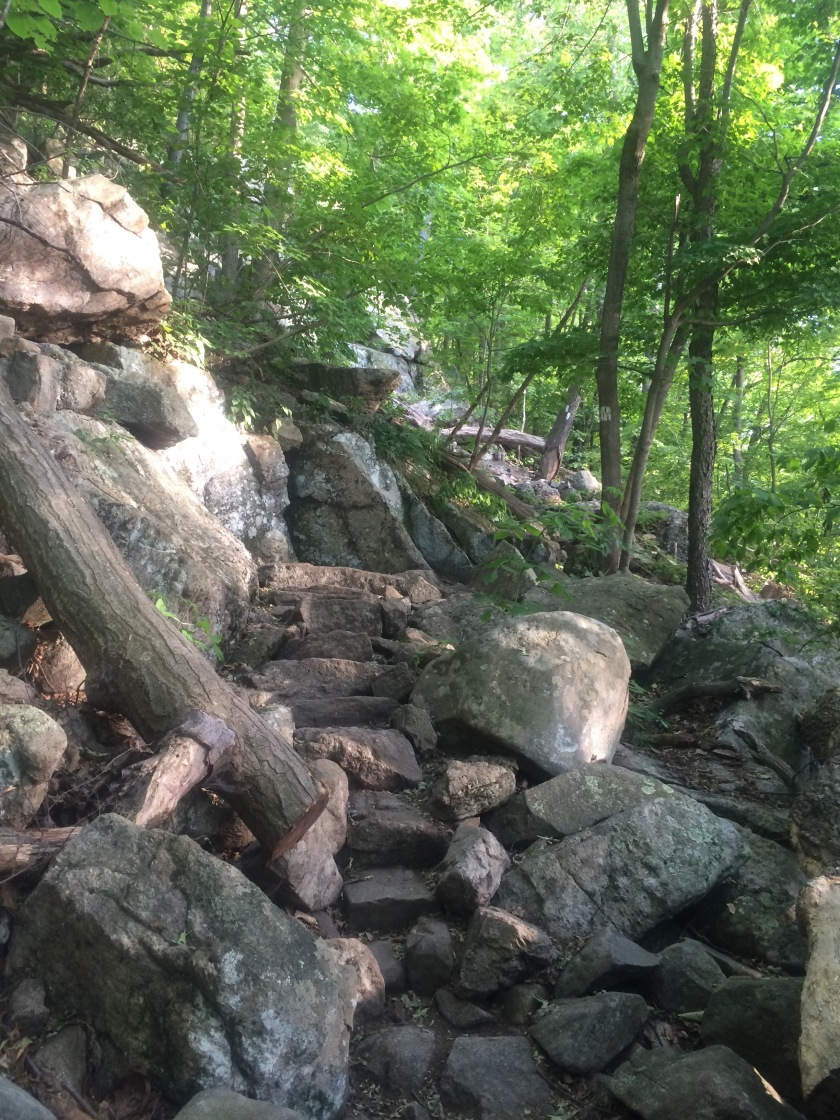 After summiting Pochuck Mountain, the AT makes a rugged little descent down to nice boardwalk over a large swamp. We followed the path for a few miles, sweating in the hot sun. 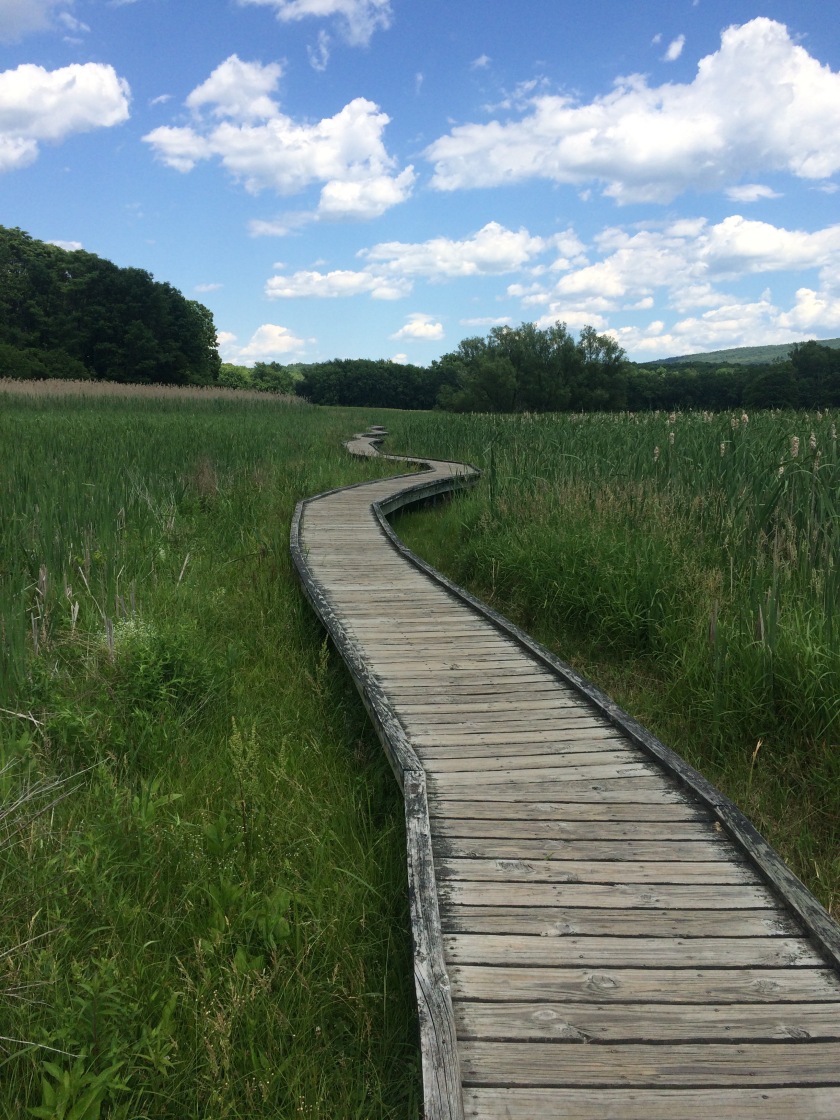 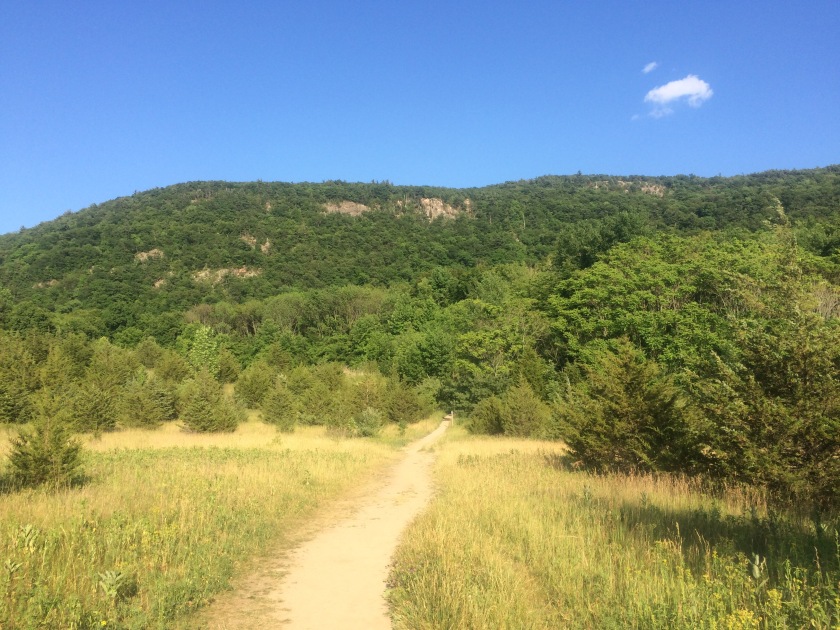 At the end of the boardwalk, I spilled out onto NJ 94 and followed a sign to Heaven Hills Farms, a small nursery that sells fresh foods and baked goods just off trail. I was beat. I needed a Gatorade, a Mountain Dew, anything to provide a boost to get through this heat.

We entered the store and bought snacks – I was enjoying an ice cream outside when the owner walked over and said we could use the wash sinks out back for “anything” if we needed. I took her up on the offer, washing as best I could and doing laundry.

Black Santa and I put our laundry in the sun to dry and rested in the shade -it was 86 outside with no wind and no clouds. I was miserable. I wouldn’t have thought temps in the mid 80s would wear me out so quickly. I imagine having 40 pounds of gear (and snacks) strapped to my back doesn’t help.

We left the nursery at 6:30 – by now, the sun was starting to go down and it was noticeably cooler outside. I started catching cool breezes. I felt like hiking again.

Black Santa and I made the decision to make it to the NY/NJ border, no matter how challenging the terrain may be ahead – we only had nine miles to go. We summited Wawayanda Mountain and enjoyed dinner at the Pinwheels Vista – while we were cooking, a bear came into view. She was large and had three small cubs with her. And she was close – thankfully, there were about seven other hikers yelling at her to keep moving. 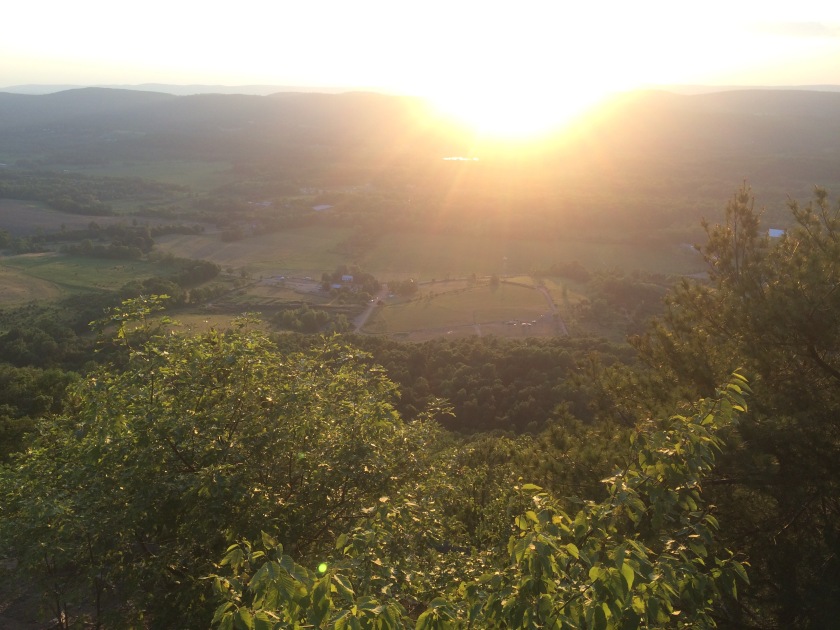 The bear did move – straight into a stealth camp a hundred yards away. While they were yelling at the bear, Black Santa and I thought it would be a good time to hike on. We switched on our headlamps and starting trying to gain ground on the difficult terrain.

At 9:00pm we ran into trail magic – I finally got my Mountain Dew after all. 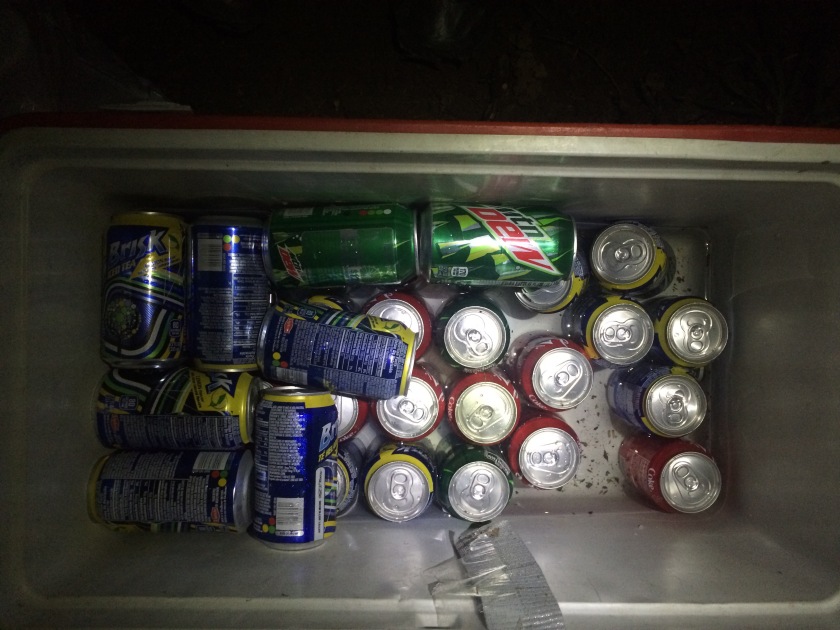 At around 10:00pm, we ran into a bear – it immediately took off running away from us, crashing loudly through the woods. (Bear encounters are becoming less exciting).

We paused a few times for snacks. The terrain was difficult and we were getting tired. At 1:45, we crossed the border and an hour later, I was fast asleep, cowboy camping not a hundred yards away. 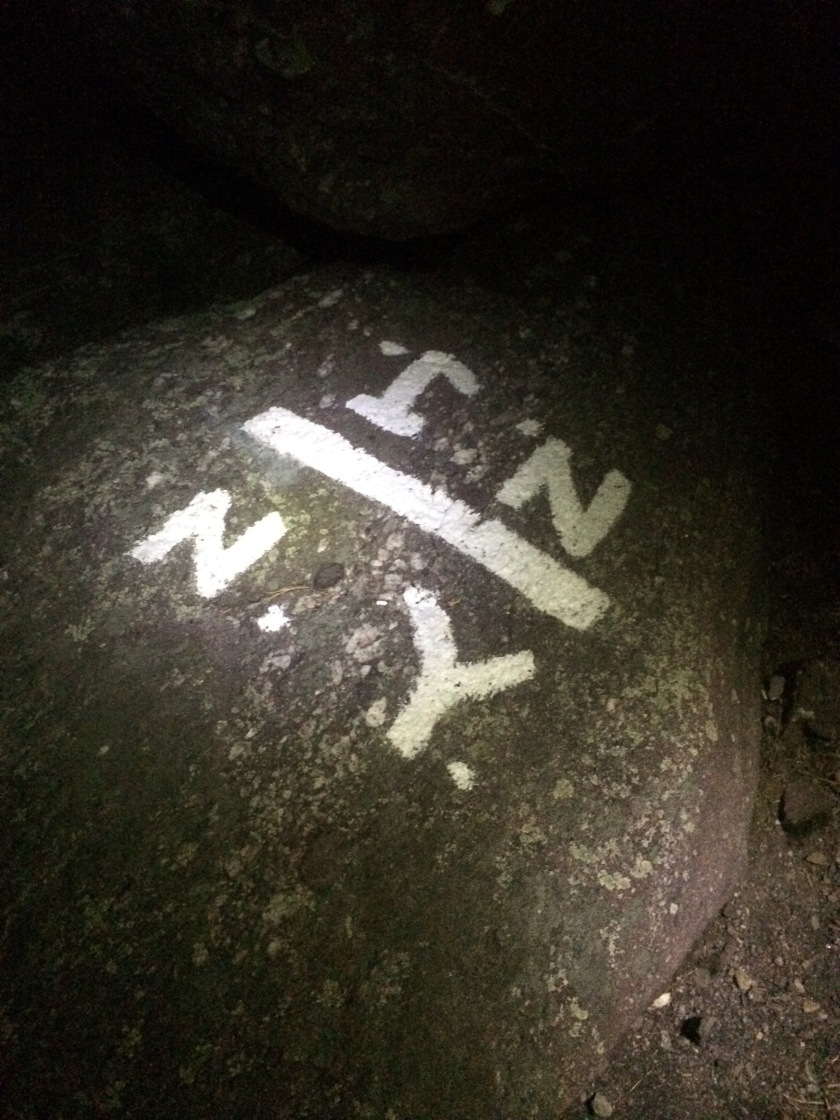 This heat is awful. And it’s only going to get hotter, I know. The night hike worked out great actually – I really enjoyed it.

We’ve got a full moon the next couple of nights – I may just keep nighthiking all the way to Fort Montgomery. If I put in a few miles tomorrow and sleep during the hottest part of the day (like noon to 6:00), I might be able to make it close, if not all the way there. I need to recruit others…

Dinner: chicken Tetrazini MRE (meal ready-to-eat). I bought it from the grocery store in Unionville – it was bulky, but but fun to cook.

Trail Magic: can of Mountain Dew, small bottle of Gatorade, sleeve of crackers

I woke up at 7:00 feeling great – I guess I needed to work some things out in my head. I started packing immediately, excited to catch up with the rest of the group. I checked my phone – Black Santa was already up and moving, presumably about five or so miles behind me.

I ran outside to use the bathroom and, while I was digging a cat hole, unearthed an old, brown bottle. I decided to keep it – I’ll mail it home once I hit Fort Montgomery, NY in three days.

I was all packed up and ready to hike north at 8:15am. It only took a few minutes, but I soon found myself at the pavilion on Sunrise Mountain. Savage, McDoubles and Champa all decided to camp here last night – I was literally 100 yards south. 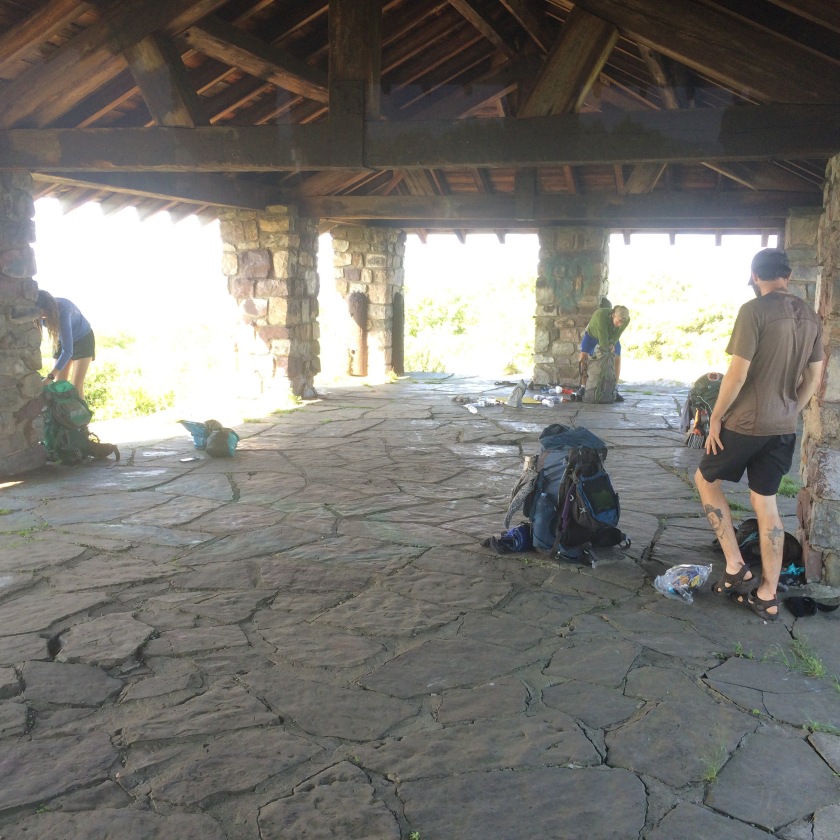 The four of us discussed the day ahead – my goal was to hike at least 20 miles. The terrain looked easy enough – I faced no serious elevation concerns, just more rocks and boulders.

But the weather was awesome – the forecast called for a high in the mid-70s with a nice breeze all day. After a quick breakfast, the four of us started hiking north.

For the most part, the four of us stayed in close proximity to each other. We chatted about the possibility of everyone going to New York City – most in the group are still undecided. We also talked about our potential end dates (when we see ourselves summiting Katahdin) – I’m still shooting for the first week in August.

At 10:30, we came across the Mashipacong Shelter. Water management has been an issue for a while now – quality water sources in eastern PA and NJ have been hard to come by. I hiked water into camp last night, but I was nearly out. Thankfully, we found gallons of water stashed for us in a bear box – it’s the little things out here that make all the difference. I did get a little turned around while at the shelter. 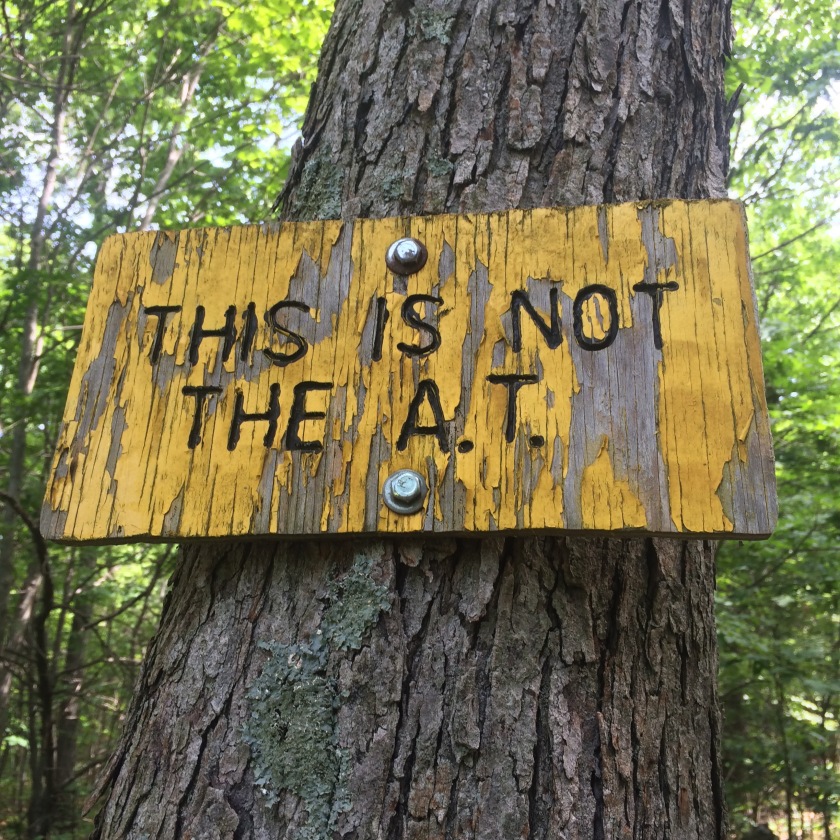 With fresh water on board, the four of us hiked on, spilling out onto Deckertown Turnpike at 11:00. As we crossed the road, I saw a familiar face – Get Weird was relaxing by the trailhead. She had just gotten dropped of to start a slackpack towards Unionville, NY – and she brought trail magic. I slammed few Mountain Dews before heading north.

Having just been in Unionville, Get Weird recommended we stay there for the night. The city actually lets hikers camp in the small park right in the heart of downtown. I checked the AT Guide and, sure enough, it didn’t look like a bad idea at all. While I’m carrying plenty of hot meals to reach Fort Montgomery, I’m running very low on snacks – maybe a quick stop in town is in order after all.

Two attractions lay six miles ahead – a beach (lake) and a giant stone monument marking the highest point in NJ. While everyone else was hiking hard to reach the beach, Savage and I decided to check out the tower instead.

At 1:15, we started catching glimpses of the monument in the distance – 20 minutes later, we were having snacks at its base. 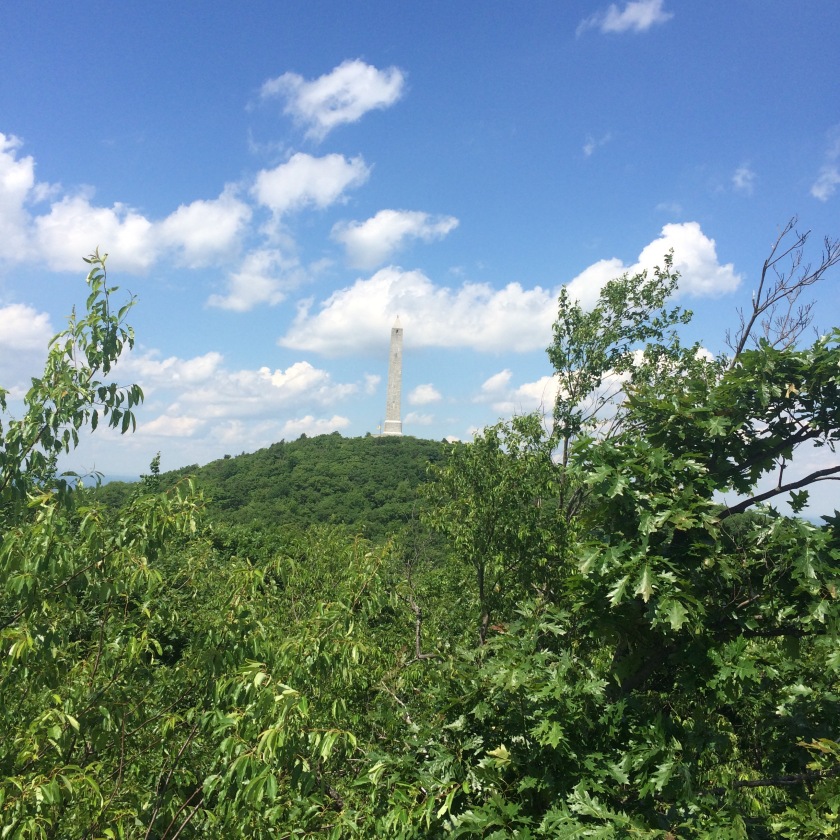 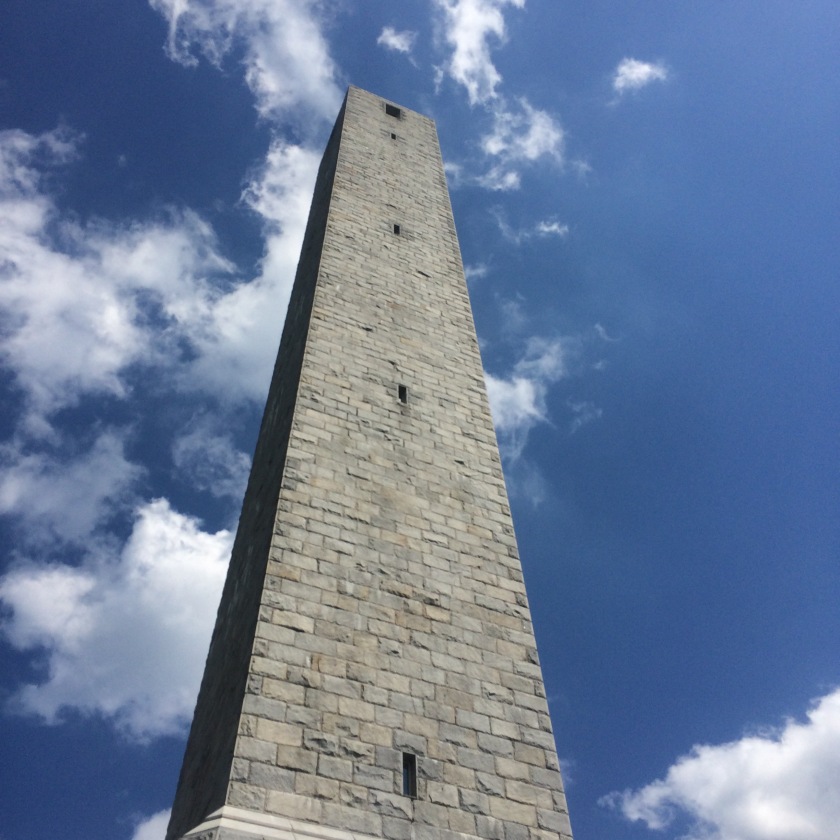 We decided to climb to the top – there were 300 terrifying steps leading up to the biggest disappointment on the AT. There wasn’t any sort of observation deck – it was more like a closet with four dirty, narrow windows. You couldn’t even take a picture – we started heading back down, texting our friends along the way in hopes they’d not make the same mistake we had. 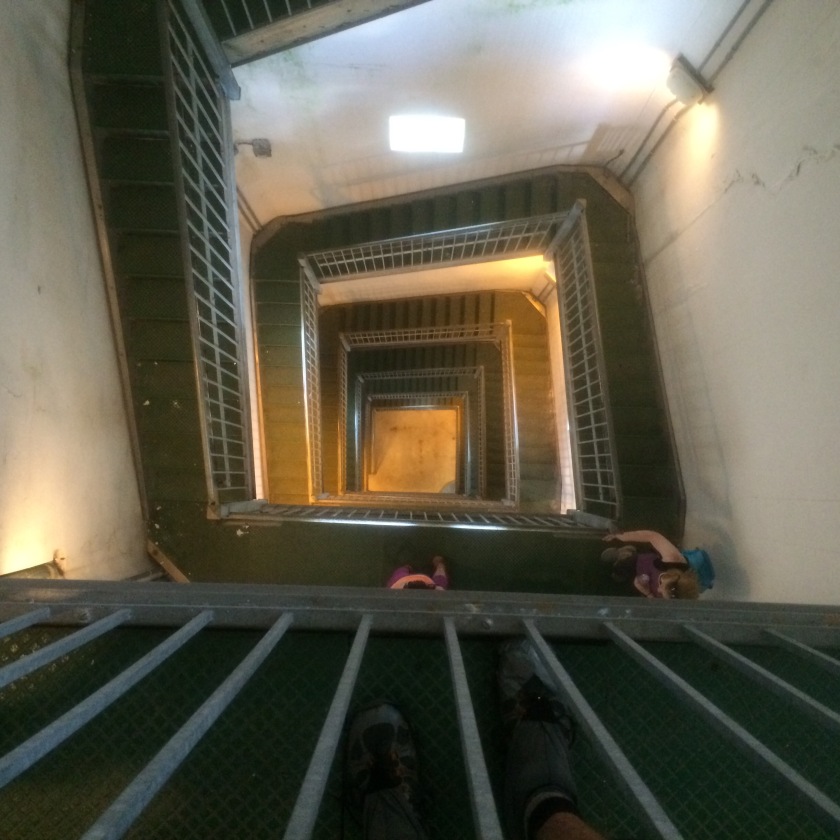 At 3:30, Savage and I were ready to get moving – we had just over seven miles to cover before hitting Unionville. We took off – soon catching both McDoubles and Champa.

I was moving great today – Savage and I bypassed the High Point Shelter and started booking down the ridge towards town. We passed a lovely pond and spent much of our descent walking on a makeshift boardwalk. We made it to Lott Road at 6:00pm and turned to march into town. 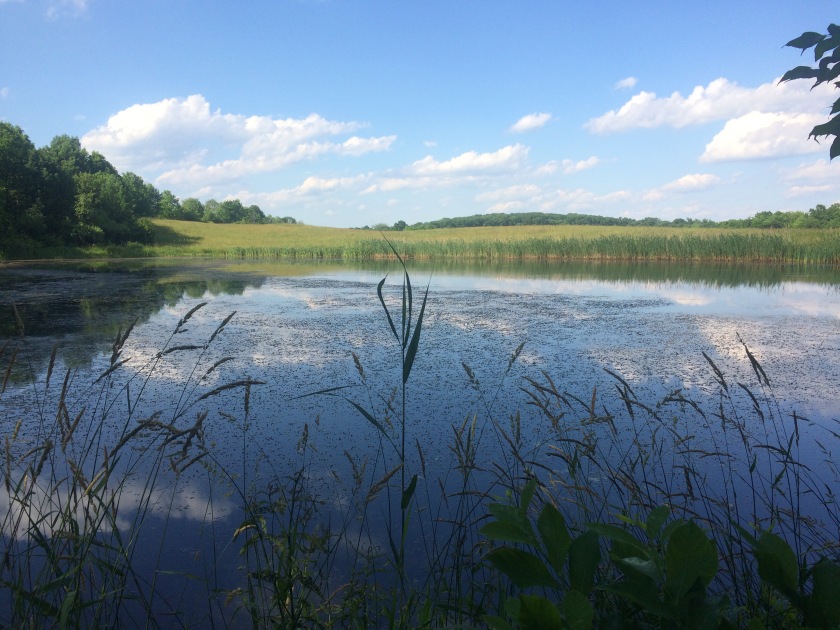 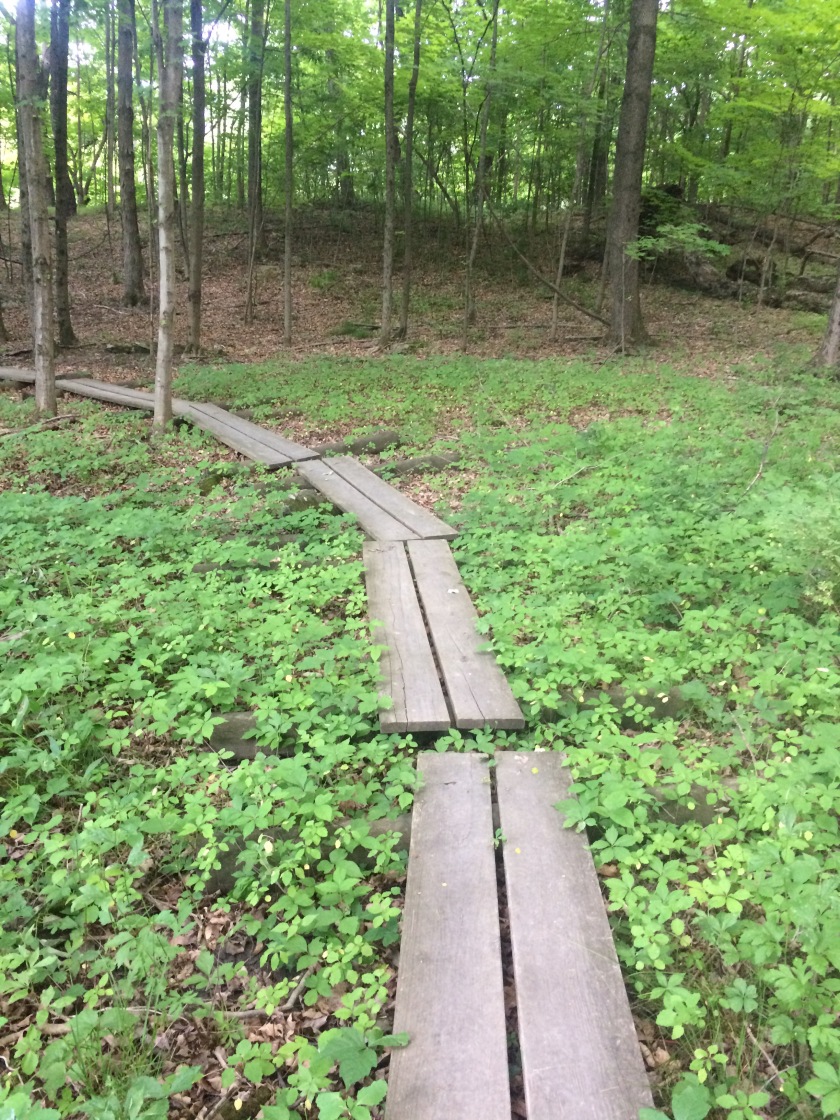 I walked into the town grocery store and registered to occupy a spot in the town park – I also went ahead and purchased (more than) enough snacks to make it to Fort Montgomery in a couple of days.

The four of us set up camp in the park – Get Weird was already here (she really flew down the trail since she was slackpacking). Having heard that the town tavern has a pool table, the five of us strolled down to Wit’s End and played a few games.

Note: I actually ran the table all night – I was unstoppable. By the time I’d won my seventh game, I was getting tired and had to just walk away.

While we were enjoying dinner, Black Santa texted me – he had just made it to town. I left the tavern and walked him over to the campsites. After cooking a quick dinner on the basketball courts, I retired to my tent to start writing.

Today was a great day hiking – even though the terrain has remained rather rocky, it seems that it’s starting to get a little easier. Tomorrow looks like more of the same, but the AT Guide lists the upcoming section as “more difficult than it looks” – we’ll have to wait and see.

Our small group has found itself in the midst of a larger bubble of hikers. I recognize most of them – even played pool with a few of these guys in Duncannon and Port Clinton, PA.

I’m hoping to be in Fort Montgomery by Monday afternoon – it’s about 60 miles away.

My boots are completely shot, I did end up buying a roll of duct tape to keep the front sole attached to the shoe. It works – I just look pretty ridiculous.