Greyhound and I woke early and were packed up before Ish was stirring. Greyhound accidentally left some peaches out the night before and I quickly noticed they had been nibbled on.

(Note: I’ve stopped hanging my food. I know it’s bad and I keep telling myself I need to start bear hanging again. I just can’t seem to be bothered when the time comes,)

We were on the trail by 7:00 am and started a gradual climb up Mt. Race that promised multiple views. It was a foggy morning, but as we hiked, the sun started burning away the fog leading to some pretty spectacular hiking. Greyhound and I stopped numerous times to take pictures. We made the quick, but steep, push over Mt. Everett. 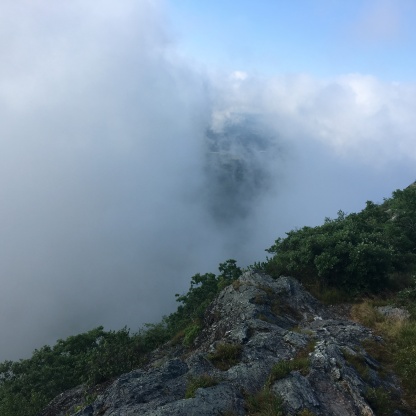 We both needed water and I needed to use the privy pretty bad. Lucky for us, there was water waiting at the Guilder Pond Picnic Area in the form of clean gallon jugs – trail magic! While we refilled, we noticed that the forest floor was covered in tiny insects. At first, I thought they were crickets again, like I had seen the day after leaving Hot Springs, NC. Upon closer inspection, they turned out to be tiny frogs – and there were thousands of them. They were hopping everywhere. We left trying our best not to squash them underfoot.

We began the gradual descent of Mt. Everett making good time on the easy trail. We caught some pretty beautiful views at Jug End as we made our way towards Great Barrington, MA. It was 1:00pm by the time we made it to US 7 having hiked 13 miles on the day. To our surprise, Ish was waiting at the trailhead. He needed to hitch into town for a resupply – we said, “why not tag along?”.

The three of us stood on the side of the road for at least 20 minutes before getting a hitch – I give full credit to Greyhound. We saw a van approaching in the distance and Greyhound exclaimed, “Come on – you know you want to!”. To my complete surprise, the van pulled over an offered us a lift. The three of us climbed in and I found myself at my second grocery store in two days.

Greyhound and I bought a rotisserie chicken and bread to eat for lunch – it was pretty funny. We sat on the sidewalk in the shade and ate that thing like animals. After completely stuffing ourselves, I pulled the rest of the meat off the bird and put it in a Ziplock to save for dinner – there was a lot of chicken left over.

Ish arranged for a hitch back to the trailhead and we were hiking north again by 3:00pm. Ish took off (he’s ex-military and is Monster-fast) – Greyhound and I hiked north alone. We crossed some beautiful corn fields and slowly made our way back into the mountains. Greyhound stopped to use the bathroom and I hung back. I turned when I heard another hiker approaching – It was Sweet Potato! I haven’t seen her in quite a while.

After Greyhound returned, she filled me in on what’s been happening with her hiking group. Monster is ahead (and long gone as far as I can tell), Juan and Oriole are a few days behind. And more news – Sweet Potato decided to buy trekking poles (she had been using a hiking staff previously). She was moving well and exclaimed that she didn’t see how she had been hiking for so long without the use of trekking poles. Greyhound knew Sweet Potato as well and the three of us chatted for a while before Greyhound and I decided to head on.

It was getting late in the afternoon and I was feeling miserable. It wasn’t my stomach or anything like that – it was my shorts. The children’s gym shorts I purchased had stretched out over the course of weeks of backpacking. I was sweating and the shorts kept falling off my hips – there was nothing I could do to keep them up. At the Tom Leonard Shelter, Greyhound suggested I hike in my underwear. I took her up on the offer.

It worked! I was able to move quickly again and instantly realized how much cooler I felt (temperature wise, assuredly) hiking in underwear versus sweaty gym shorts.

It was getting late in the afternoon and we needed to find a place to camp. I suggested we camp at The Ledges, a rocky overlook located right on the AT. I had plenty of experience cowboy-camping and thought The Ledges looked promising – Greyhound was initially leery of my prediction, but said we should give it a shot.

The Ledges were still five miles away and it was getting late but we pressed on. Just before we reached MA 23 (about three miles away from The Ledges), we ran across a small farm with a herd of inquisitive goats. They bleated at me and I bleated back. Before I knew it, the entire herd was walking across the field towards us – a few stopped just short of the barbed wire fence to check us out. 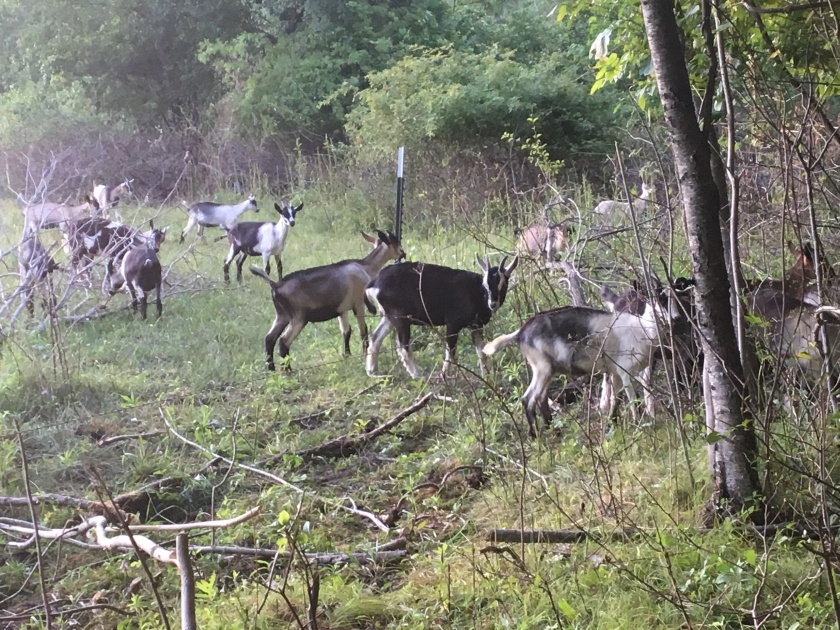 After some tough climbing, Greyhound and I made it to The Ledges at 7:00pm. We set up our tents on the main ledge (incidentally, directly on the AT) and started making dinner. I added warm beer (a leftover in Greyhound’s food bag) to the rotisserie chicken and sautéed it. It was awesome – probably the tastiest meal I’ve made while on the trail. We made sandwiches with rye bread and enjoyed a fairly nice sunset before deciding to retire.

I did not see Savage, Champa or McDoubles today – and Black Santa is only 35 miles behind me. I spoke with Push – she’s even further back after taking ten days off in Harper’s Ferry, WV. I’m really enjoying hiking with Greyhound.