We woke up to clearing skies and the rising sun. It rained heavily overnight, but we were nice and dry in the shelter. We packed quickly – we both wanted to get as close to Hanover as possible. The descent away from Wintturi was pretty easy. 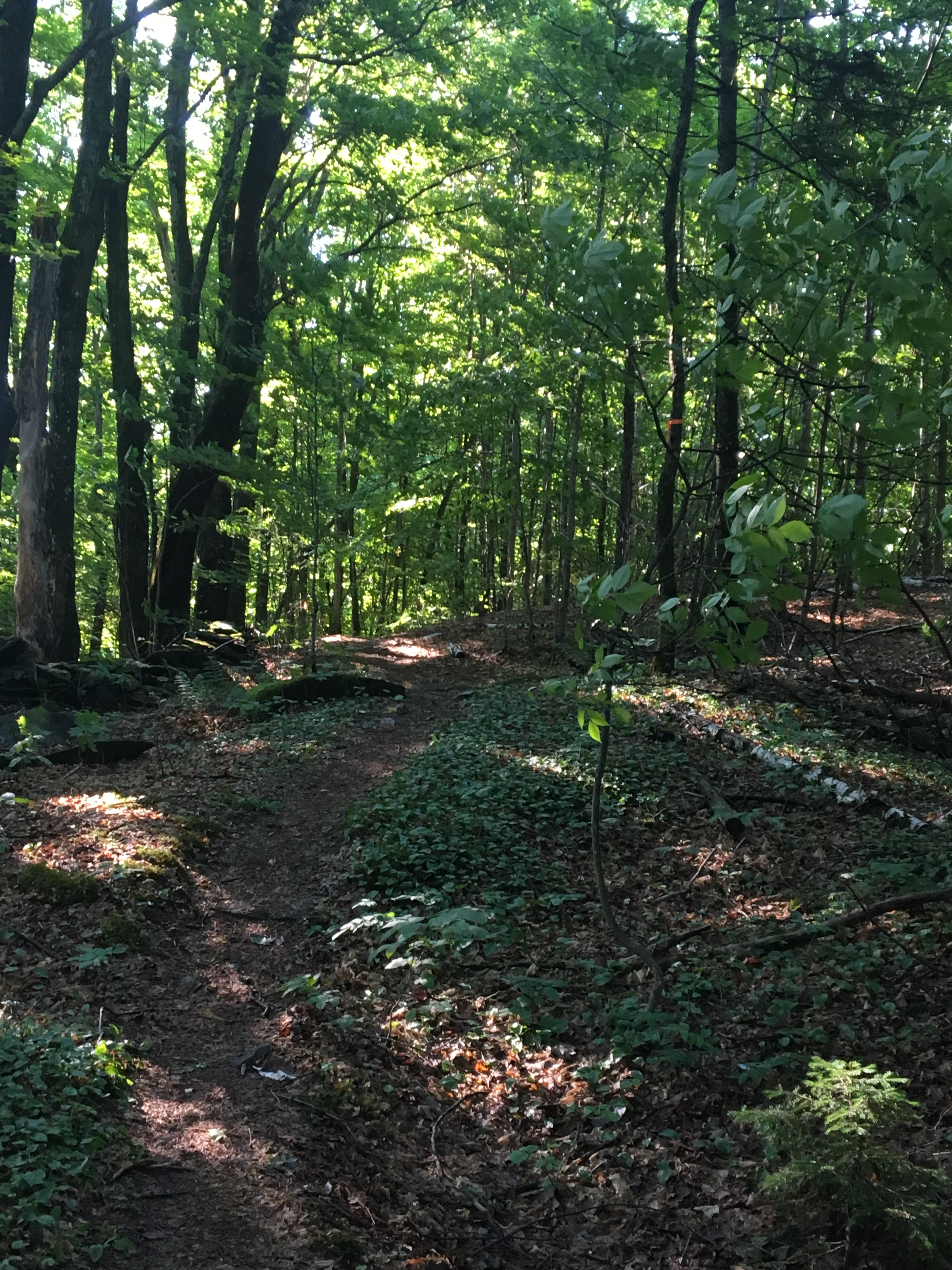 We hiked four miles before 9:00am and stopped at VT 12 for a quick break. Greyhound checked the AT Guide – there was a small market/bakery just up the street. We decided we’d wait for it to open and get some fresh bread or fruit before heading on. The sun was finally out and we relaxed on a pair of trail side boulders.

We were glad we waited – Greyhound bought cookie dough ice cream and I bought a 7-inch peach/raspberry pie. We sat outside and enjoyed our breakfast. As we were finishing up, the group who stayed at the hostel hiked up – I asked them if they’d seen Black Santa. We were told he ended up leaving very late from the Yellow Deli hostel in Killington – he had to do his morning chores. Chances are, if he hurries, he’ll probably pass us while we were eating pie.

We left the market at 11:00am and really started making good time. The elevation profile for the rest of the day looked really easy. We stopped at freshly stocked cooler at Cloudland Road and enjoyed some much needed trail magic. I had a PB & J and a bag of Pringles before hiking on. While we ate we started talking about the possibility of making it to Hanover, NH tonight. I had plenty of snacks but was down only one dinner – no breakfast tomorrow.

We decided we’d push and make it there tonight. The thought of having a late dinner in town became a motivating force. We left the cooler at 3:00pm – we still had 16 miles to go if we wanted to reach Hanover. 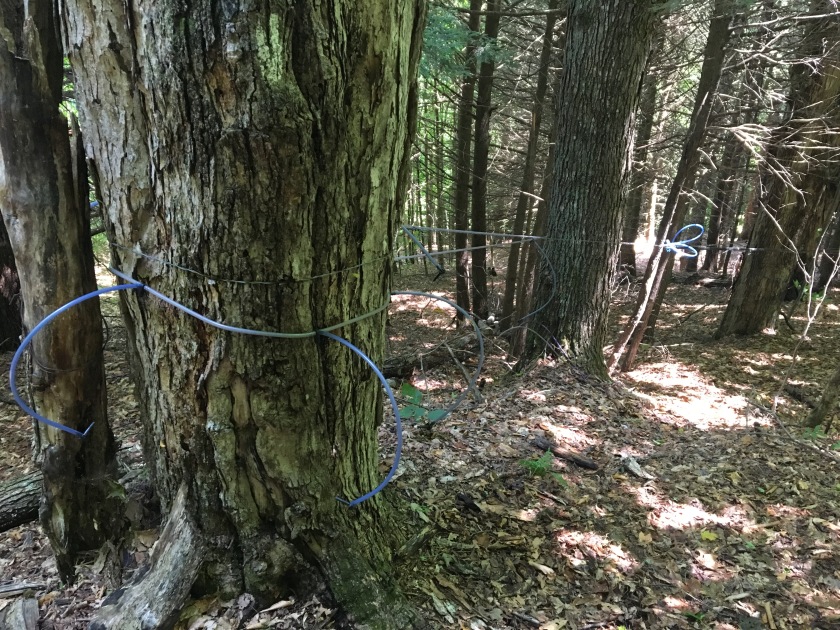 With ten miles to hike on the day, I stopped at a bench and took a quick break. It was nearing 5:00pm and we really wanted to make it to town. We crossed the White River and passed through the small town of West Hartford, VT. Off in the distance, we could see a large house with a huge garage that had a giant AT symbol plastered on the front. We could tell hikers were hanging out in the yard. As we got closer, I saw that one of them was Black Santa. I waved and we walked over to the group.

The owners of this home were busy converting the garage into a working hostel. Even though Greyhound and I were committed to making it to Hanover tonight, we graciously accepted a cold drink and some beef jerky sticks from the owners. I used the privy and we got ready to hit the road.

Black Santa wanted to stay at the hostel tonight – he was having fun with the group he had been hiking with lately. I think they were talking about heading into town for beer and pizza. While that certainly sounded like a good idea, I still wanted to push and reach Hanover – Greyhound was still on board. We left Black Santa at 5:30pm after promising to meet up in Hanover tomorrow.

The trail was very flat – we were really able to crank out miles. Entering Hanover marks the end of Vermont and the start of our second to last state, New Hampshire. I’ve been excited about hiking in New Hampshire for a long time, ever since I was a kid. I couldn’t wait to get back into big mountains again.

We cruised onto Elm Street at 9:00pm and started to make the three-mile road walk to the border. At 10:00 we crossed the Connecticut River and officially entered New Hampshire. We were both very tired  – I looked through the AT Guide, trying to find somewhere to grab dinner. We settled on an Irish pub in downtown Hanover, not too far from the Dartmouth campus. 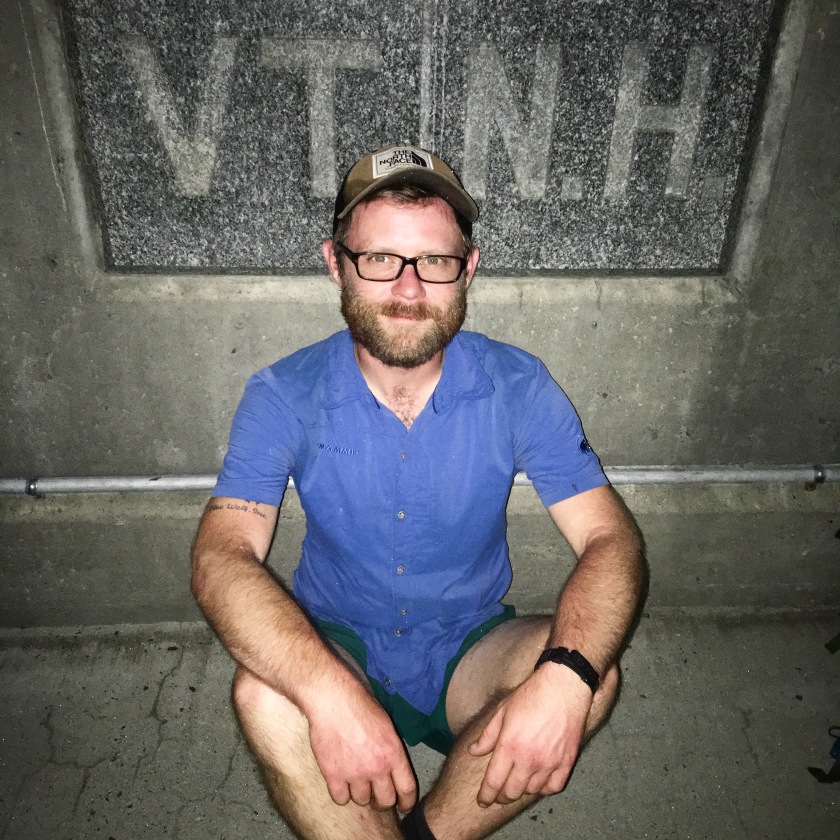 After dinner, we hiked back down to the Connecticut River and set up our tents in a gazebo near the Dartmouth crew area. About fifteen minutes later, a campus police officer pulled up and asked me to get out of my tent. I stepped outside and was told to move. He suggested I head back to Vermont and camp somewhere over there.

We packed as quickly as we could and started making the walk back to Vermont at around 12:30am. As soon as we crossed the bridge, I followed a pedestrian path down to the water’s edge and found a hidden nook where we could set up camp without being seen from the road. I was exhausted and went to sleep rather quickly.

The plan for tomorrow is to get up early and get our chores done. There’s a community center that’ll let us shower and do laundry. We can quickly resupply at the grocery store, have lunch with Black Santa and leave in the afternoon. I’d like to make it to the Moose Mountain Shelter tomorrow (ten miles north of Hanover).