We woke up early and headed straight to the continental breakfast bar. We ate a ton – even after all that pizza last night. We quickly packed up and started walking/hitching the three miles back to Hanover. It only took about 15 mins, but we caught a ride from a nice guy heading to work. He dropped us of near the trailhead and we started hiking north, in full pursuit of Black Santa.

We hiked for about two hours, crossing a field on a pretty boardwalk, and stopped near a stream five miles outside of Hanover. We both felt terrible. Despite our recent (accidental) zero, I feel kind of miserable – this hike’s getting hard once again. What started as an 11:00am snack break turned into to a three-hour affair. Greyhound very much wanted to catch up on her own personal journals and I needed to figure out what to do with my website.

I felt very bad about not posting anything – literally falling off the face of the earth to many people. The truth was that I was kind of glad my keyboard broke. I was having a lot of fun for the first time in a long time. Hiking late, hitching into town frequently – these were the things that were bringing me real pleasure in the last month of this adventure.

I also felt guilty, that in not writing, I was not doing this thing to its fullest. To some extent, it’s very true – unfortunately, the effort it was taking to mentally finish this hike completely occupied what was once writing time. This thing was about to get hard again – we were in New Hampshire and was seriously starting to question my own drive to finish.

I got over it. At 2:00pm we set off hiking again with a renewed vigor – the rest of the afternoon looked challenging. We decided to hike as far as we could, try to get as close to Black Santa as possible. But that would involve a night hike. And Greyhound had never night hiked. After my crazy night hiking experiment in the week leading up to Bear Mountain, NY, and my bear encounter on The Rollercoaster heading in to Harper’s Ferry, WV, I considered myself to well-versed in the ways of night hiking.

The trail was relatively easy hiking until sunset – by 8:45pm, I had hiked eleven miles and took a quick break near Moose Mountain Shelter. I had been ahead of Greyhound for quite some time – I hadn’t seen her in hours. She quickly caught up and expressed the same thing I was feeling – she felt a little depressed and a little worn out as well. We decided to only hike an additional nine miles. We knew we had some tough miles ahead but really wanted to get back on our 20-mile a day average. 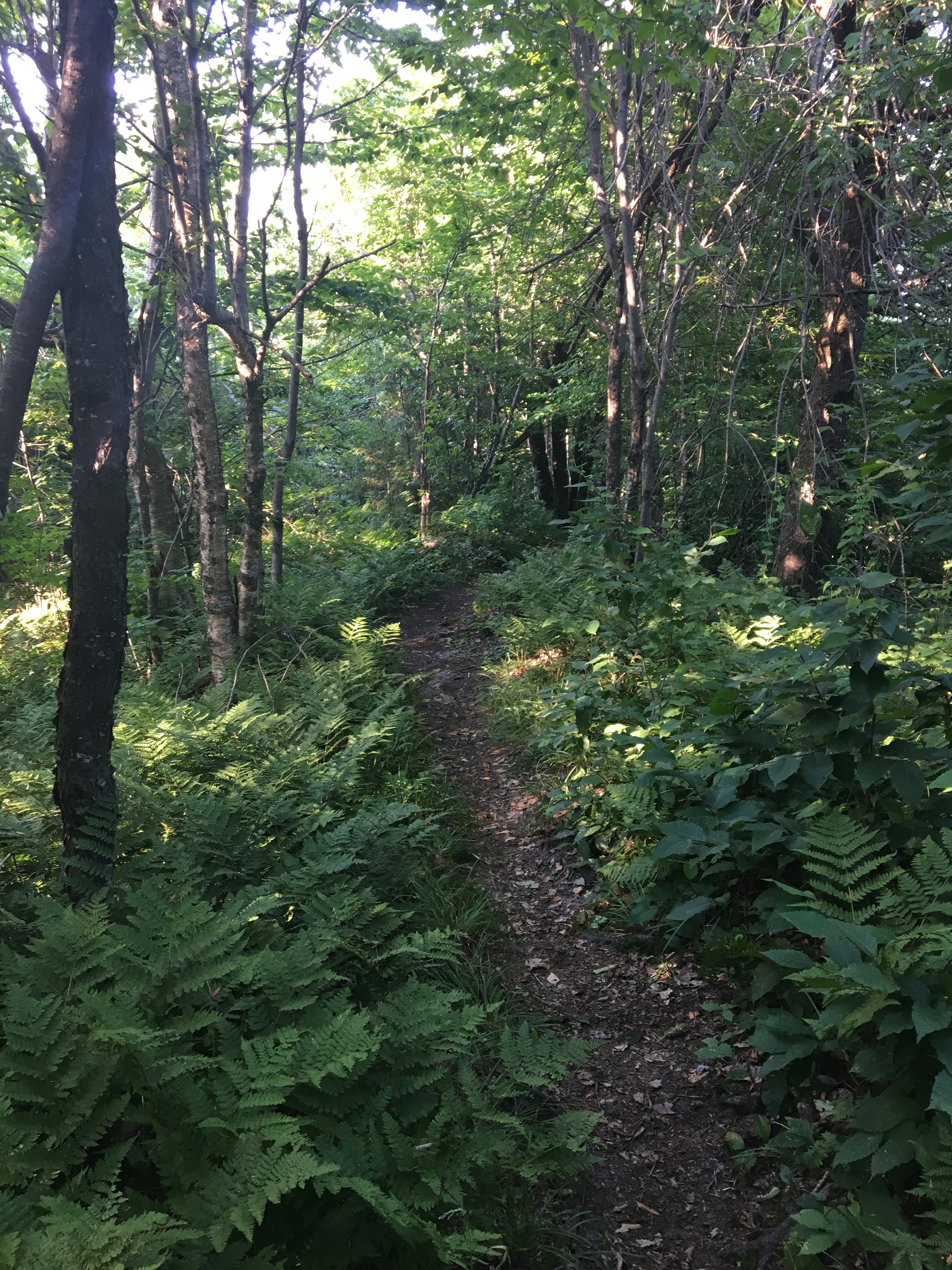 Not twenty minutes after we set off from the north peak of Moose Mountain, we ran into three bears – a mother and two cubs. They were scurrying around about 30 yards away from us in a clearing off-trail. Greyhound paused and jumped behind me. I yelled loudly and forcefully, just like on The Rollercoaster, and the bears took off – the two cubs climbed a tree and the mother ran for cover in the bushes. We hiked on.

Not twenty minutes after that, we definitely heard another bear off-trail to our right. It was out of the reach of my or Greyhound’s headlamp, but it certainly sounded big. We were climbing up to Holt’s Ledge at 9:45pm when two glowing eyes caught my attention. A large cat was frozen motionless about 20 yards to our left. I took special notice of the silhouette of his boxy ears and stout frame. Greyhound’s been lucky enough to have run across a bobcat down south and remembers this one being twice as large. We cautiously hiked on.

We passed the Trapper John Shelter at 10:45pm and an old AT marker (off by thirteen miles) at midnight. At 1:00am we collapsed on the Lambert Ridge, eager to eat and sleep. We found a spot that reminded me of the exposed rock that Black Santa and myself slept on after crossing into New York from New Jersey. We cowboy camped on the ridge and fell asleep just before 2:00am.