We woke early and immediately started packing. I took another quick shower and finished organizing my food bag, making sure I was carrying enough for at least six days of backpacking. We both suited up and left the hostel at 8:00am. We walked a block down the street and decided to have one last real meal at the town diner before heading out.

The food was absolutely amazing – they even had a bakery that sold fresh-baked bread and an assortment of sweet snacks. I bought a small loaf as we were leaving. We strapped on our packs and headed across the street to try to get a hitch to the trailhead. In minutes, a USFS truck pulled over and offered us a lift. We climbed into the truck bed and took off. We arrived at the trailhead in minutes and officially entered the Hundred Mile Wilderness. 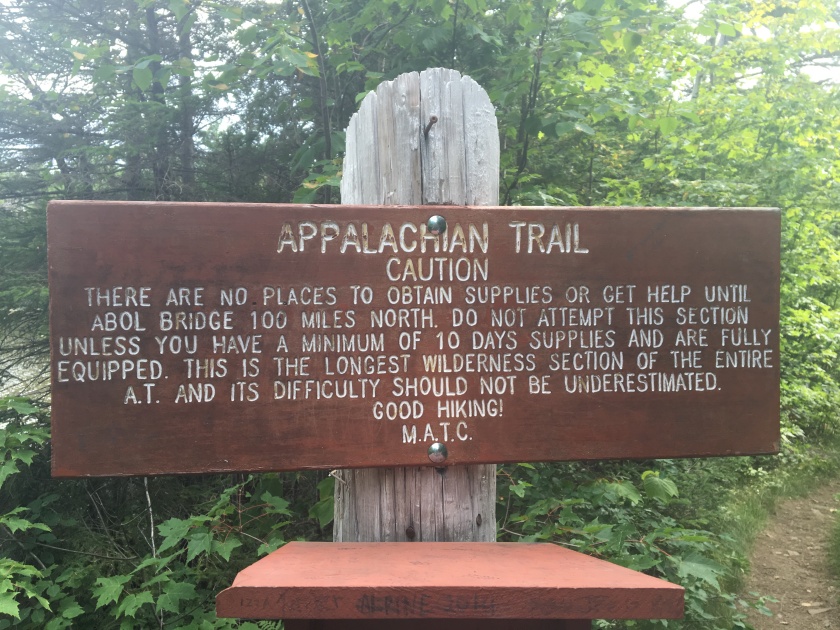 We passed by several ponds and decided to take a break at Little Wilson Falls. It was a very cool. The couple who picked us up in Andover told us that the areas surrounding Monson were known for their slate. You could definitely see that was the case at Little Wilson Falls. We pressed on at 2:30pm. We weren’t hungry yet, but we were getting there. 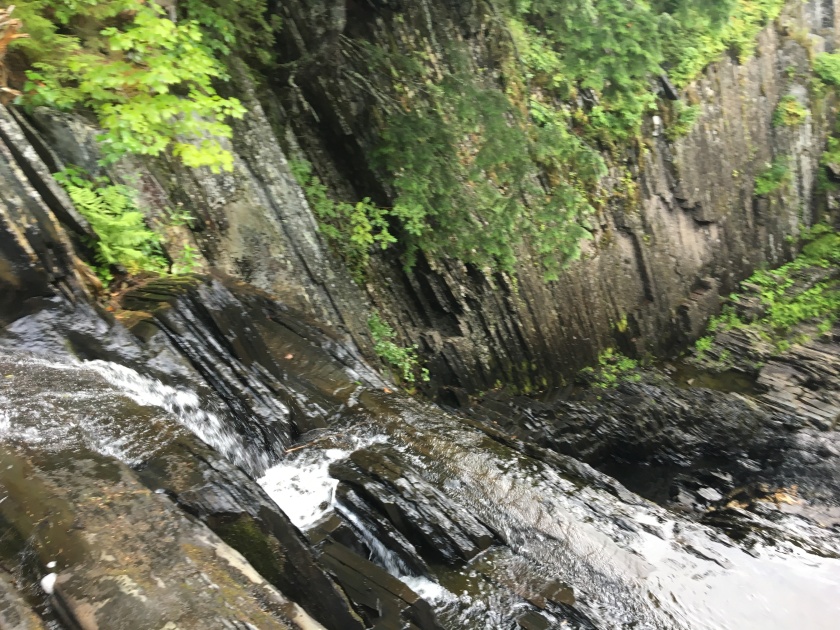 Maybe a mile or so past Little Wilson Falls, we decided to stop and have lunch. All of a sudden, the skies opened up. Thinking I was being clever, I pulled my footprint (ground cover) out of my tent bag – Greyhound and I held it over our heads like a giant poncho while the storm passed. It made eating our lunch awkward and difficult. But we stayed dry and were back on the trail at 3:15pm. 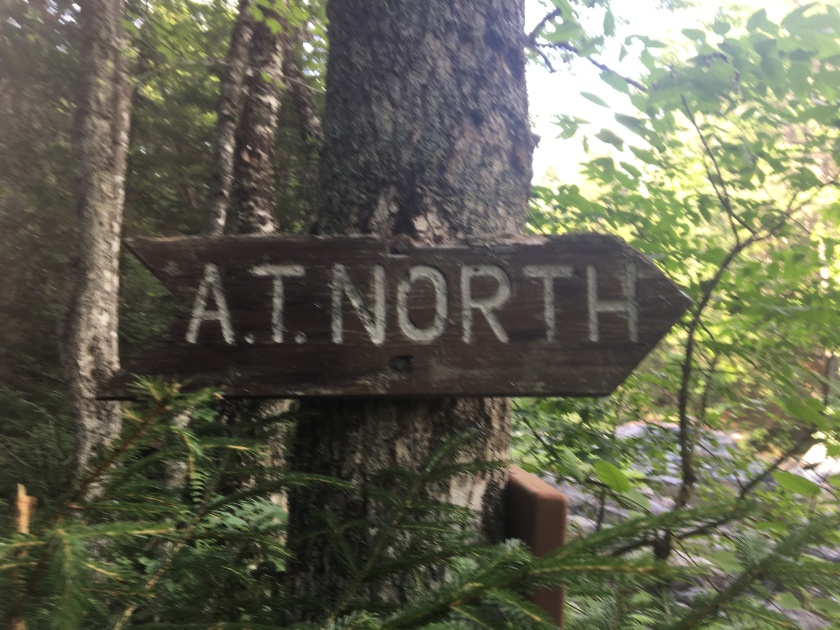 I wish we could say we were making good time, but we weren’t. While the terrain was relatively flat, it was very rocky and rooty, and pretty muddy from all the rain. At 4:50, we stopped to ford the Big Wilson Stream. I stood on the bank and watched as Greyhound attempted to use an overhead rope to shimmy across the water’s surface.

But the physics weren’t quite right. She jumped in the air to gain momentum – but gravity had other ideas. She ended up landing square in the middle of the stream, her legs and the bottom of her pack getting drenched. It was a sight to behold! Thankfully, she wasn’t injured (ego, for sure) and we quickly moved on. Did I mention I filmed the whole thing? Priceless.

We hiked on, passing the Wilson Valley Lean-to at 4:00pm and continued hiking north. We had crossed a small mountain and were nearing a series of streams when Greyhound paused and yelled – her hand was holding her ear. Her earrings were gone!

We tried to figure out what happened and when. She remembers feeling the rope pull past her ear when she jumped/fell into the stream hours ago – her earrings must have been ripped out then. It was the only plausible scenario we could come up with. And these earrings were special – they were given to her by her grandmother as a graduation present. She was very upset and disappointed to say the least.

But we had still had many miles to hike if we wanted to stay on schedule. I told her the earrings were more important, that we should turn around and try to find them. I knew it might take some time to find them – it’d be sunset by the time we arrived back at the stream. I assured her it was worth losing miles in order to find them.

We turned around and started sprinting back to the Big Wilson Stream. After an hour of hiking, we passed the Wilson Valley Lean-to. We had decided I would stay behind with our packs and make camp while Greyhound ran ahead to find her earring. I quickly put up my tent and stowed our packs before heading down trail to help her search.

I was nearly to the stream when I saw her hiking north towards me. As she got closer, I saw that she had a big smile on her face. She found her earring! She said she spent a few minutes in the creek, moving rocks aside were she fell in. She moved a few feet to her left, looked down and saw something gold glinting the sunlight. She reached down and plucked it out from the sandy bottom – only the stud was exposed. How lucky – I was truly glad she found it!

We hiked back to the lean-to and finished making camp. We had plenty of time to cook dinner and relax before going to bed.

A group of teenagers from the Maine CCC (Civilian Conservation Corps) were camped all around us – they were doing trail maintenance on this section of the AT. It got a little noisy – I thought about the boy scouts. I also thought about Walk With Nature, my middle school backpacking club. While on our first backpacking trip to AT in North Georgia, I met a backpacker attempting his thru-hike. I remember his story well. The seed had been planted.