I woke early again, running down the AT to find a spot to use the bathroom at 5:30am. I returned to our camp (in that lush backyard) to find Savage, Black Santa and Champa all up and packing.

I was excited to get moving today – the elevation profile looked nice and easy. But I really couldn’t wait to get to Caledonia to take a shower. The four of us were packed and on the trail by 6:30.

Note: I’m enjoying the sun rising earlier in the morning. Waking up at 5:30 is starting to become the norm – I always believed myself to be a morning person, this certainly confirms it.

I hiked north and quickly passed a campsite at Falls Creek. McDoubles was packing his tent – I shouted a good morning and told him I’d meet him at Deer Lick Shelter a few miles ahead for breakfast.

After a quick, but rocky, up and over, I crossed several roads before hitting Deer Lick – I was making pretty good time as it was only 8:00am and I had already hiked four miles. Black Santa decided to press on – I stopped with Savage and Champa to eat and wait for McDoubles.

He arrived and confirmed plans for the day – I told him I wanted to make it to Quarry Gap Shelter just past Caledonia. He hiked north and I continued eating.

Note: I know I’ve already said this before, but McDoubles is a fast hiker. I wouldn’t see him again all day.

As I was getting ready to leave, Get Weird hiked in. She hammocked a few miles behind us last night and was up early – she needed to make big miles today to meet friends further up trail.

I finished breakfast and suited up, ready to go. I made a quick descent, passing two shelters along the way before deciding to take a break. It was getting hot and I was starting to sweat a lot. After consulting the AT Guide, I decided to press on, opting for a nice lunch at Chimney Rocks just a mile ahead.

Down south, I ran into views and vistas multiple times a day. As I’ve hiked north, the mountains have gotten smaller and the views more scarce. As such, I’ve starting making a point of taking side trails if doing so promises a good view.

In this case, it paid off -Chimney Rocks was great. I got a sweeping view of the adjacent range and was treated to a nice, cool breeze.

I lunched long enough for Savage and Champa to catch up before taking off again. Leaving Chimney Rocks, the AT gradually descends all the way to Caledonia State Park – I had nine miles to go.

Just as I was leaving, I got a message from Black Santa – he was three miles ahead and decided to take a detour into South Mountain, PA. Less than two miles off trail, there was a hiker-friendly tavern that offered a free shower to paying patrons. I decided to keep going towards Caledonia.

It was around 1:00 and trail was actually nice with few rocks and pleasant, ferny woods. 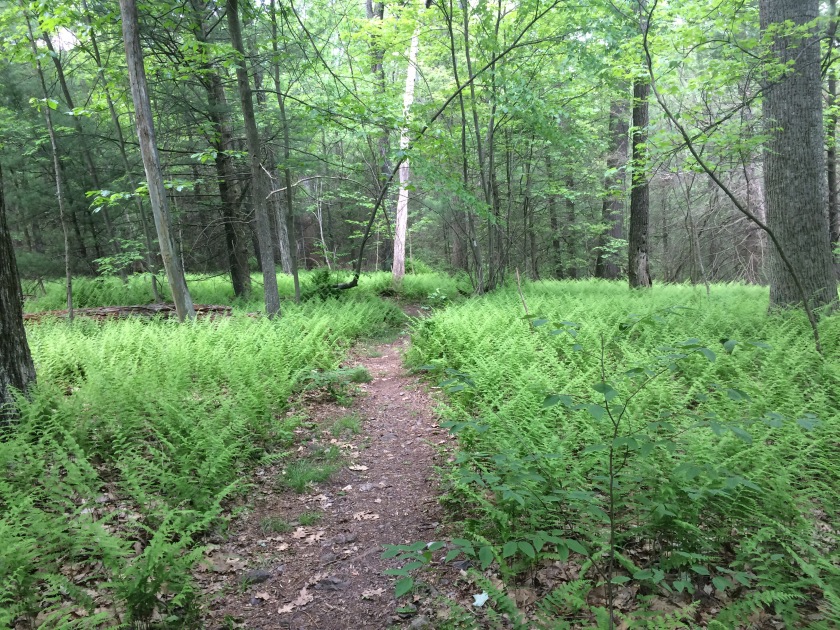 I leapfrogged with Savage and Champa all afternoon – hiking with both intermittently. As I neared the Rocky Mountain Shelter, the trail got rough once again. At times, I found myself scrambling over boulders and hopping from rock to rock.

I don’t handle rocks well – they tear at the bottoms of my feet. Imagine walking on baseballs, that’s about what it’s like at times.

By the time I finally got to Caledonia, I was exhausted. I hiked through the park and over to the concession stand – closed. This didn’t look good. I walked over to the ranger station – locked. Damn, no shower. But the bathrooms were unlocked so I washed up as best I could – I even thoroughly rinsed out my shirt and socks, hanging them on my pack to dry.

By this time it was 6:30 and, after talking it over with Champa, decided to take advantage of the location and camp somewhere near the stream that runs through the park. I’m glad I did – we found a great waterside campsite just a few minutes from the AT.

After setting up my tent (no rainfly tonight), I enjoyed watching Champa and Savage attempt to bathe in the creek. For such a hot day, the water was apparently frigid. Champa ended up falling in after a branch he was using to balance snapped off.

Black Santa hiked in as we were starting to make dinner. We briefly chatted about the trail ahead and went to our tents as the sun finally set.

Tomorrow’s gonna be a fun one. The terrain looks easy – I just hope there isn’t a lot of rocks.

I should hit the official AT Midpoint tomorrow at 1094.5 miles – Harper’s Ferry is only the ceremonial halfway point.

After that there’s the “Half Gallon Challenge” at an ice cream shop on the AT. Apparently you get a free wooden spoon if you polish off a half gallon of ice cream in one sitting. I’ve already puked once on the AT so I think I’ll pass – still, it should be fun to watch other hikers attempt it.

I hope to end my day at the Pine Grove Furnace State Park, home of the AT Museum.

I’ve made recent changes to my diet and the results are starting to show. I cut sugary snacks out, replacing them with dried fruits. I felt like I was relying on too many packaged snacks for quick boosts of energy throughout the day.

I also cut back on the amount of almonds I eat. Some days, I’d polish off about eight ounces – that’s a lot of saturated fat. I replaced the almonds with granola and cereal bars. I’m still getting the same amount of calories, but now I’m getting more dietary fiber instead of the saturated fat.

I feel better. It seems like I have more sustained energy throughout the day.

And while I’m talking about food, I’m afraid I’ll have to stop eating hot lunches. I usually feel heavy after eating them and, in this heat, I’ll often move slowly afterwards. I felt good today after having a healthy cod lunch at Chimney Rocks.

I feeling really good about reaching he halfway point. I’ve been thinking about it a lot – this journey’s a day away from being halfway over.

I’m beginning to miss friends and family back home – both in Atlanta and Seattle. And I’m beginning to realize that I’ll really miss the people I’ve been hiking with. I’ve made some really great friends out here.

Dinner: Mac and cheese with a can of buffalo chicken – it was awesome!