Note: All my keyboard needed was a charge – the shift keys are working again. Also, I’m uploading this from my room at the Doyle Hotel – thank God for zero days.

I woke at 6:00 and made a quick jog over to the bathrooms before packing up. When I returned, Black Santa was awake and starting to pack. I quickly broke camp and chatted with other hikers who decided to stay at Pine Grove as well.

Get Weird’s bosses were already up over at the REI camp and were starting to make breakfast. I sat and waited my turn. Breakfast was totally amazing – a seemingly never ending supply of pancakes and bacon. I left camp at 8:00 and got moving quickly. 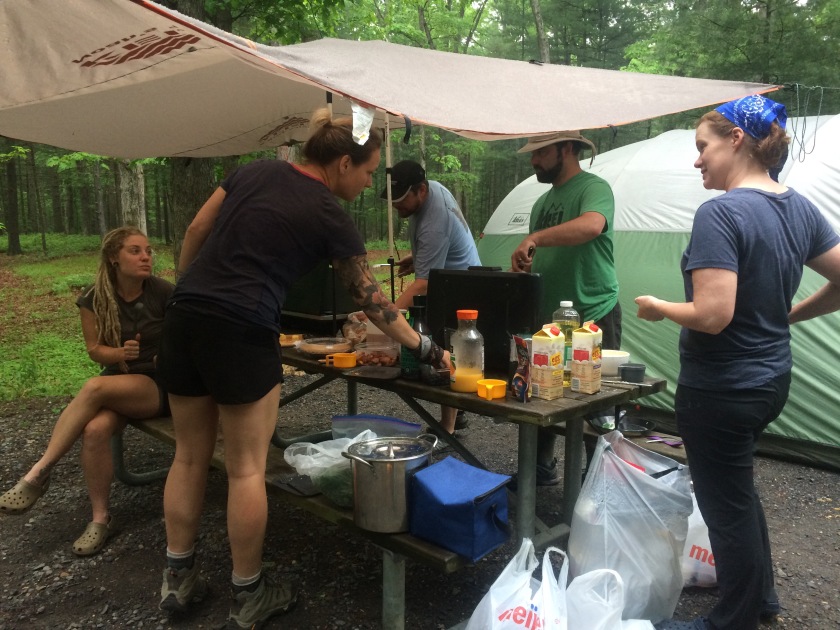 Boiling Springs, PA lay 20 miles to the north. I knew I’d have no problem making it there by late afternoon – I just needed to make sure I was there by 4:30. Black Santa confirmed that my tent had arrived – all we needed to do was pick it up from the post office.

As we hiked from the campsite to the trail head, we came across a huge snapping turtle digging a hole in the grass (presumably to lay eggs).

The first ten miles looked easy enough – I didn’t see any major elevation gains until I would hit the road crossing for Mt Holly Springs, PA. Black Santa took the lead and I quickly followed. 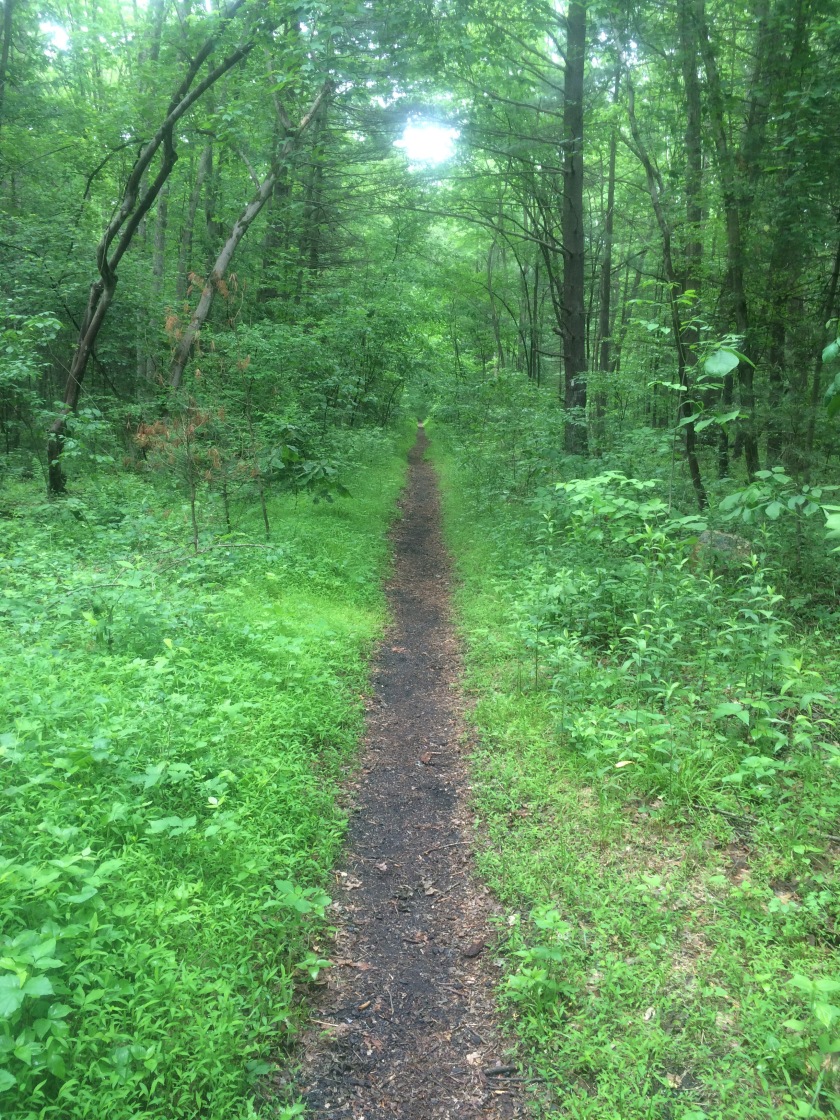 I hiked alone for the first two hours, making six miles by 10:30, when I caught up with McDoubles collecting water from a stream. He was surprised to see me – he tented with Savage and Champa just a few miles north of Pine Grove. They must have still been behind me – I don’t know how I missed their camp.

PA contains perhaps the first section of the trail I’ve hiked that routinely passes through private property. It’s kind of weird. I’ll be hiking along, enjoying the peace and serenity of nature, and then, oh look, an auto repair shop.

I crossed PA 94 at noon having covered ten miles on the day. Savage and Champa were still behind and McDoubles and Black Santa were in the lead. The next six miles looked challenging and I paused to eat a quick cold lunch.

I resume hiking at 12:30 and was hit with a series of pretty steep (but thankfully short) ascents. As I navigated a boulder maze at the top of the first little ascent, I ran into Black Santa – we decided to keep hiking together in order to reach the post office and grab my new tent.

As I completed this difficult little stretch, I started noticing rocks covered in different kinds of moss and lichens – they looked almost fake, as if someone had painted them. Regardless, they were cool enough to warrant a pic.

Note: I’ve noticed my pictures have recently looked blurry. It’s the humidity causing condensation on everything, including my camera lens, the iPhone screen and lens – even my glasses are constantly fogged up. I’ve tried wiping them with a camp towel and the moisture still remains. I need to buy some sort of a defogger as soon as I get to a proper town.

The descent into Boiling Springs was easy – Black Santa and McDoubles hiked in just ahead of me and the three of us made our way to the post office. I was excited – Black Santa went inside and returned with my new tent. After packing and shipping his old tent home, we walked next door to the tavern and ate dinner. As we ate, other hikers started pouring in. First Get Weird, then Savage and Champa.

It was 7:30 and all six of us wanted to hike out of town in order to get as close to Duncannon, PA (and my zero at the Doyle Hotel) as possible. Duncannon lay 25 miles up trail, but the first half of that stretch promised to be as easy as it gets – we’d be hiking through pastures for 13 miles.

And that’s how it started – if we’d be hiking through easy terrain, we might as well hike into Duncannon that night (or by the next morning). And everyone was on board. Another night hike loomed imminent. We all left at 8:00pm excited of the hiking that lay ahead.

Savage, McDoubles and Champa led the way – Black Santa, Get Weird and I took up the rear. We crossed several pastures and through active farmland, hiking alongside fields of corn, wheat and beans. 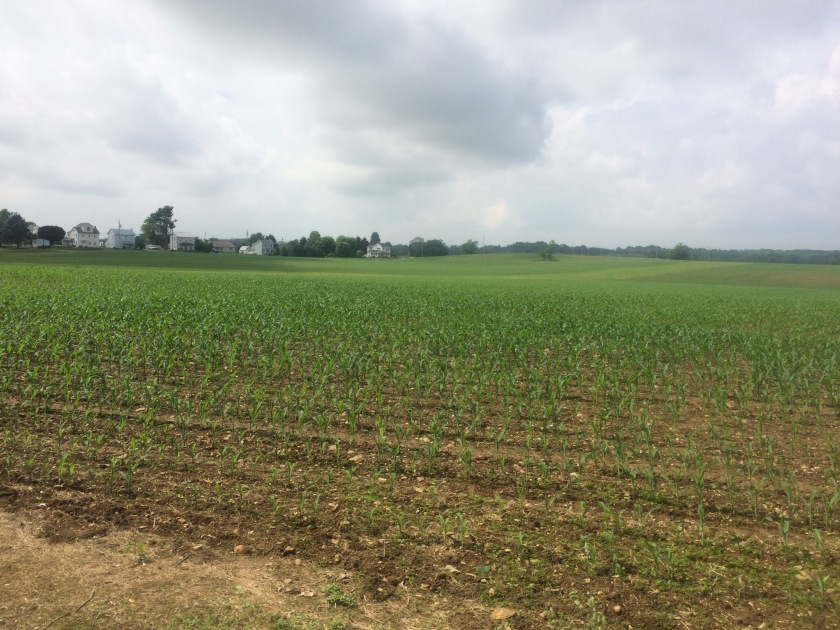 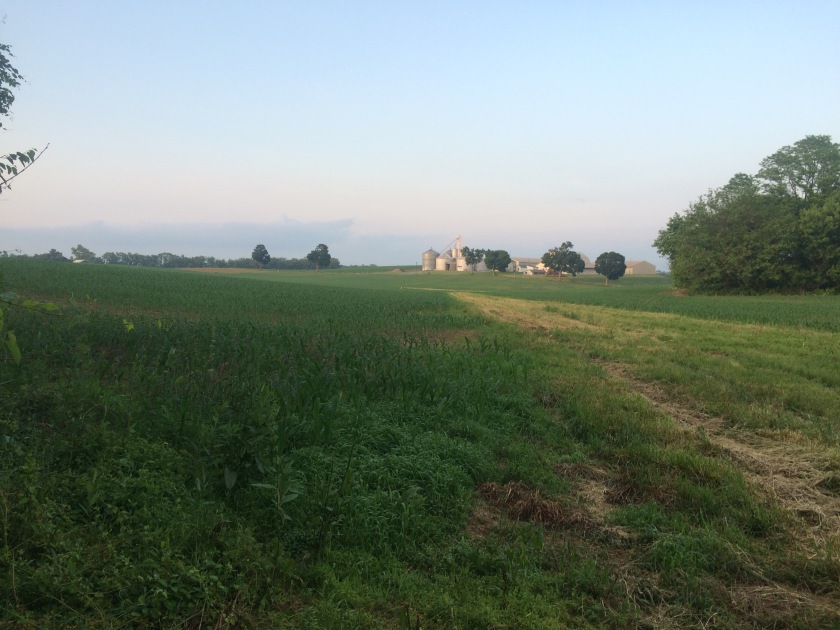 The three of us hiked into the night, stopping on some railroad tracks at 10:00pm to have a snack – we’d already covered seven miles since leaving Boiling Springs. As we were packing up, Champa called me – Savage, McDoubles and himself had just run into a huge problem.

They were crossing a field using a fence stile and found themselves in a pasture full of “aggressive” cows. They ended up bypassing that small part of the AT because they didn’t feel comfortable crossing the field. Aggressive cows? Come on, Champa, I thought.

Sure enough, when we made it to the field two miles ahead and crossed the stile, I started seeing beady eyes shine back from my head lamp. I slowly and quietly started hiking by, but the first cow I came across stood and started walking right at me. I froze and yelled – it didn’t matter, the cow kept coming forward. We all backed up and immediately hopped back over the stile. There was no way I was crossing that field.

I followed Champa’s sage advice and bushwhacked alongside the property line, rejoining the AT a few hundred yards ahead. This is the first time I missed a part of the AT, but I’m not at all bothered because I saw AT signs posted along the way – I guess this bypass is more frequently used than I thought.

It was nearing midnight by this point and I decided to pause and take a picture. This is what night hiking looks like:

An hour later, Black Santa, Get Weird and I entered a stone tunnel that runs under PA 944 and found Savage, McDoubles and Champa eating snacks as they lay in their sleeping bags. They were exhausted and decided to take advantage of the natural shelter. After excitedly telling them we’d see them in Duncannon, the three of us set off into the night.

At this point the AT departed from the farmland and headed back into the mountains. As I started ascending that first little mountain, I became very aware as to how bad my feet actually hurt. Every little rock I stepped on shot pain throughout my entire foot. But I was only 12 miles away from Duncannon – I kept going, just at an exceedingly slow pace.

At 1:30am, we made to the Darlington Shelter. Get Weird was done for the night – she peeled off trail, wishing Black Santa and I good luck as we continued hiking in the dark. We didn’t get far – the trail was terribly rocky and we started looking for a place to camp as soon as we descended from the shelter.

We actually found a nice, level spot right off the AT. By 2:30am, I was in my brand new tent and falling fast asleep. I was disappointed I didn’t make it to Duncannon, but still pleased I had put up big miles on the day.