I woke at first light and slowly stretched my legs. They were stiff, but feeling better. I pulled my feet out of my sleeping bag and began the difficult task of taping my toes. I made sure every hot spot was covered before putting on my river-clean sock liners and hiking socks. I decided to start the day in boots to see how things would go.

I grabbed my bear bag and packed up, leaving camp with Shaggy and Clutch right at 8:00am. My feet felt fine as I started the 2000 foot ascent up to Pond Flats. About halfway up the mountain, I knew I was going to be fine to push forward towards Damascus – the tape was doing the trick. Shaggy took the lead.

At the top, I had breakfast with Clutch and started my descent as he was finishing a cup of coffee. While I had seen some smoke in the air that morning, it wasn’t until I made it to the northern side of the mountain that I saw the source  – it appeared the forest close to Watauga Lake was on fire. 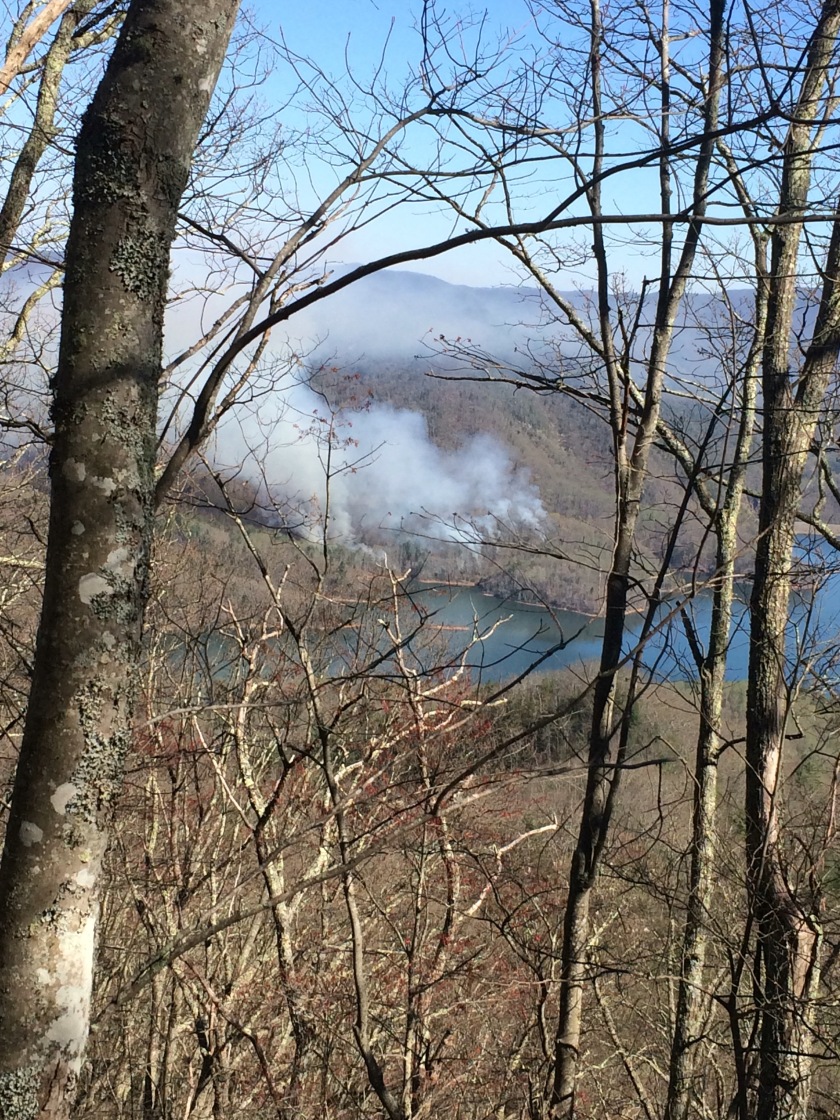 I called home and asked my mother to search online for any news on a potential forest fire. Sure enough, at some point yesterday the fire broke out and consumed a large swath of land close to the shore.

I opened my GPS/mapping app and was surprised to see that the AT actually ran very close to the fire. I picked up my pace – I was certain when I reached the bottom there’d be some sort of trail closing. When I got there at 11:00 – nothing. Shaggy was still ahead and Clutch somewhere behind.

I entered the Shook Branch Recreation Area and began following the trail along the shore, seemingly right into the fire.

The smoke was starting to get thick as I ran across the first of many U.S. Forest Service firefighters – I was kind of surprised he let me pass through.

Apparently, the fire started burning Saturday and was largely contained by the time I arrived. The AT itself, as it deviated away from shore towards the Watauga Lake shelter, acted as a natural fire line. 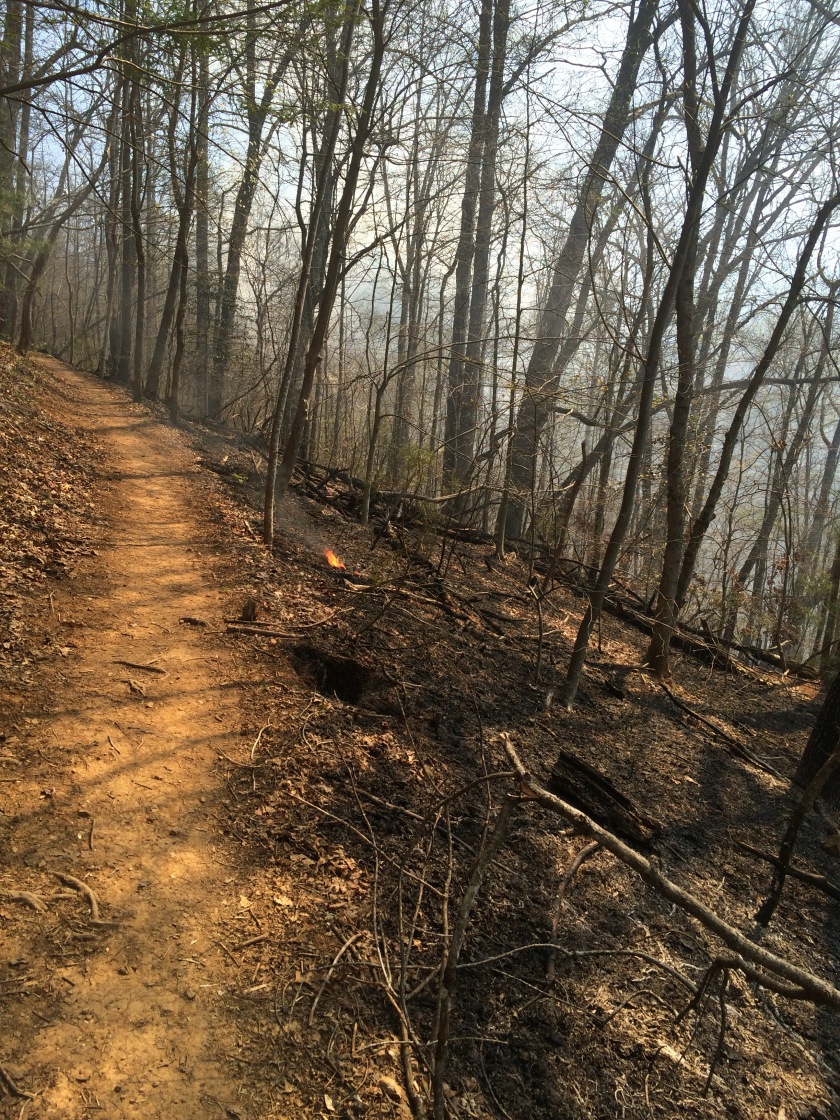 As I was hiking along, the firefighters were starting a controlled burn of the area between the AT and the shore not yet effected by the fire. Here the smoke was at it’s worst – at times I could barely see in front of me. I was able to get one picture – it’s on my digital camera so will have to wait for later.

I stopped at a spring just after the controlled burn and chatted with one of the firefighters for a minute. He told me they may have to shut down the AT temporarily until the fire burns itself out. He also confirmed my suspicions that fire most likely started when someone left a campfire unattended.

I doubt it was a thru-hiker. We’ve been warned for days not camp at Watauga due to bear activity – there’s been signs posted on most trailheads.

I crossed the Watauga Dam and met up with Shaggy at the trailhead on the side of the road. I reapplied tape and made a hot lunch. My feet were doing fine considering I just hiked 10 miles. Shaggy zoomed ahead – I told him I’d do my best to catch up, but had to listen to my body.

The ascent leaving Watauga back up to 4,000 feet was tough. Luckily, some kind person left a cooler full of Mountain Dew halfway up – it did the trick.

As I was hiking, I kept catching glimpses of the fire. It was an impressive sight. 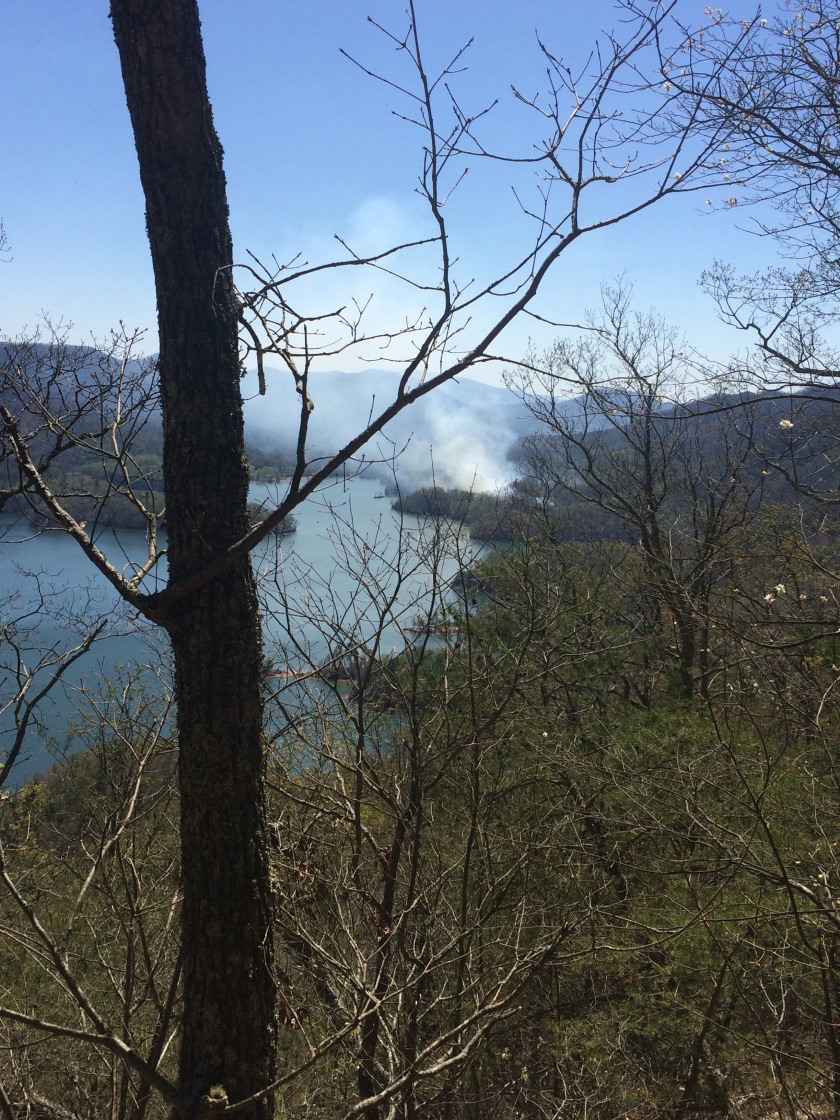 I eventually made it to the Vandeventer Shelter at 5:00 and decided to make camp. I’m really glad I did. The only available tent sites were located behind the shelter – with a stunning view of Watauga Lake and the valley below.

I made a quick dinner and climbed to the top of a rock outcropping, eating as I watched the sun set.

I’m looking forward to sunrise tomorrow – I’ve got some prime real estate. As I was starting to clean up, I received a late text from Savage – she had reached the dam with the other guys (Canuck, Moon Boots, Medicine Man and Clutch) and decided to press forward towards Vandeventer. Awesome – I wouldn’t be tenting with strangers after all.

At around 8:30pm, I received a series of rapid texts from Savage. She was a mile and a half away gathering water, when she came face-to-face with a large black bear. She screamed and it took off running. By the time she collected herself, the sun had set and she was scared. I put on my boots, grabbed my poles, knife and mace, and headed down trail to walk her back to the shelter.

She wasn’t too far away when we met – she certainly was rattled. We made it back to camp at 10:00 – I promptly turned in for the night.

What a day – what a week. Seven days ago in Irwin, TN, I made it my goal to reach Damascus, VA in eight days. I’ve got one and half days worth of food and one day left to meet my self-imposed timeline. Damascus is 33 miles away. While those 33 miles are as flat as any backpacker can ask for, I’m not giving my hiking a marathon-plus good chances.

I intend to be hiking at 7:00am, so we’ll see how tomorrow goes.

I’m glad the group is catching up – looks like we’ll all be in Damascus on Wednesday. I can’t wait to see Medicine Man and Summer – he’s been talking about hiking with his Golden Retriever ever since I met him.

My plan for Damascus is to arrive early Wednesday morning and get a room for one night. I’ll be leaving Thurday afternoon and tent just outside of town – I’m finding that I feel best (and hike best) when I don’t spend idle time in towns. If I need more rest, I can do it from my tent at camp. We’ll see how that goes.