Note: I’m posting this from tent on Saturday morning. I fell asleep waiting for the pics to upload last night. I slept warm in my tent for the first time in a week. The forecast got it right, too – lots of rain last night.

The cold may have woken me up at 4:00am instead of 2:00 (as has been the case lately), but it was the Whip-poor-will screaming from a tree over my tent that prevented me from getting any real sleep (check out the short video I posted on Facebook – you’ll see what I mean).

I started packing up at 5:30 and ate a silent breakfast in my tent before breaking camp just before 7:00. Savage, Black Santa and McDoubles were camped at the summit of Blackrock just a half mile up trail and I wanted to catch them before they left.

I made the quick hike up and started hearing Savage’s laughter bounce around through the woods. I followed the AT around the summit and was rewarded with a clear, sunrise view of the surrounding mountains. I really wish I had broken camp last night and moved up here with them – they picked a really good spot. 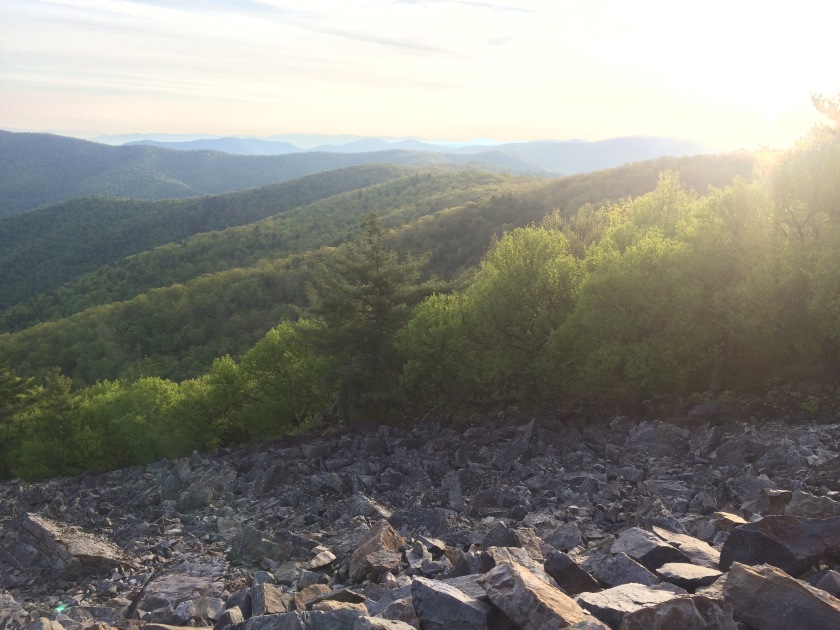 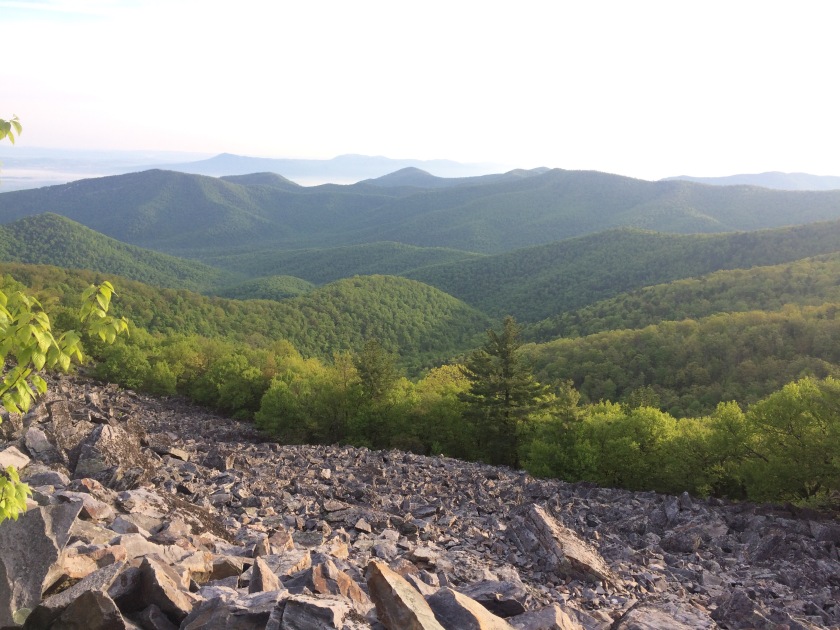 Black Santa made his way down from the summit and met me on the AT – Savage and McDoubles started booking it the seven miles to the Loft Mountain Wayside and Camp Store.

Savage is getting off trail this weekend for a date – she’s been looking forward to it for weeks now. Yesterday, she realized she’ll need to get off today (one day early) in order to hitch to Luray, VA and pick up a package. And it looked like the Loft Mountain Wayside would be her best bet. McDoubles went with her because the Camp Store sells snacks.

Black Santa and I took our time making it to Loft Mountain. Neither one of us has slept well lately – he’s also having problems with his sleeping pad keeping him warm. Despite our sluggishness, the weather was finally nice. It felt like spring for the first time in weeks. 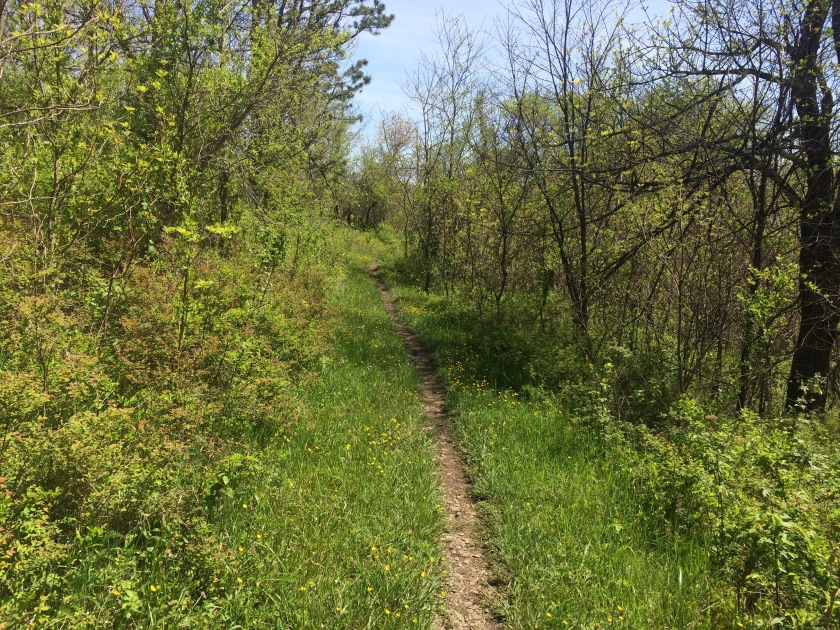 It took us almost three hours to make the hike (on extremely well-graded terrain) – pretty sad. As I approached Loft Mountain, I skipped the Wayside and opted for the path leading to the camp store. I was hoping they sold sleeping pads. I needed something, anything, to give me more protection from the cold than I was getting with my summer inflatable pad. And I wanted a flush toilet and a shower.

As I approached the camp store, I found Savage and McDoubles gorging themselves on burgers and chips – Black Santa sat in the grass and raided his food bag. I walked into the store and immediately went for the camping gear. And I found what I was looking for. Sort of.

If this were an outfitter, I would have grabbed another Thermarest accordion-style Z lite. But this was a touristy camp store. I walked away with a Coleman roll-up sleeping pad. The thing is enormous and looks like it glows in the dark. I strapped it to my pack and headed for the showers.

I paid $1.75 for 5 minutes and 15 seconds of hot water – it was amazing. I changed clothes and went back outside. Savage left to catch a hitch from the Wayside (it’s busier) and Black Santa, McDoubles and myself set off.

McDoubles is an ultralight backpacker and isn’t even 20 yet – the kid can fly down the trail when he wants to. He took off ahead leaving Black Santa and myself in the dust. Leaving Loft Mountain, the AT gets very choppy – lots of small, but steep, ups and downs. They tend to slow me down.

My immediate goal was to make it to Pinefield Hut to refill water and eat. En route, I ran into a small group of section and day hikers pointing off trail. A bear? Nope. Just a giant rattlesnake – still pretty cool though (his head followed me as I tried to take a picture).

It was nearly 1:00 by the time we made it to Pinefield Hut to have a hot lunch. I didn’t take advantage of the snacks offered at the camp store so I was pretty hungry by this point. It’s hard justifying buying food when my food bag is already insanely heavy.

We were entertained by the antics of four retired weekenders, staying in a hut (shelter) for what seemed like the first time. It was only early afternoon, but they were spread out in the hut, making camp for the night. I smiled – they probably had no idea there was a horde of thru-hikers behind them who wouldn’t take kindly to a hut built for eight being taken over by only four. I left quickly.

I hiked through a part of the Shenandoahs hit by wild fire – again, the AT acted as a natural buffer, stopping it from spreading further.

I caught up to Black Santa and we crested Weaver Mountain. Black Santa paused. He (AT&T) had cell service – I (Verizon) did not. Trail rumor had bad rain moving in overnight. We checked the radar and, sure enough, trail rumor was fact (for a change). The storm was moving in from Kentucky and had already proved to be a monster.

I wasn’t so tired anymore. Setting up my tent in the rain is one of my least favorite things to do. Even with my “rainfly first” method, everything still ends up wet. We checked the AT Guide. It was either hike another seven miles to the Hightop Hut or push 11 and hope we could sleep under the Elkton, VA overpass. I still hate shelters (especially crowded ones) – we decided to press hard for the bridge.

We caught up with McDoubles at Powell Gap, telling him of the storm and our plans – he liked the idea and zoomed ahead. I followed at a slower pace as I made the four-mile ascent of Hightop Mountain. The trail was easy for an ascent, but I was still moving slowly. All I could think about was getting a warm, full night’s sleep with my new sleeping pad.

It was nearing 7:00 by the time I passed Hightop Hut on my way to the summit. I assumed Black Santa and McDoubles were far ahead. I was hiking in search of a spring when I heard I rustling in the woods to my right and turned, just in time to see a small bear running away from me. It finally happened – I saw a bear (if only for about two seconds).

Note: I lamented not seeing a bear yet to a local in Waynesboro. He told me I’d probably get “bear assed” in the Shenandoahs. He said that, most of the time, when you see a bear, you only get a glimpse as it’s running away – hence, getting “bear assed”. It happened just as he predicted.

I paused at the spring and was quickly met by McDoubles and Black Santa. They were snacking at Hightop Hut and heard from another hiker I had moved on. The three of us set off in a hurry for the overpass.

That’s not to say I didn’t pause to take in the beautiful, flower-lined trail or the view from Hightop Mountain. Stopping for both was worth potentially getting rained on.

I finally made my way to the overpass at 8:15 to find Black Santa and McDoubles sitting by the road. The overpass was a no-go – the sides were too steep and there was no ledge to sleep on. Bummer.

After scoping out potential spots near the road, we decided to risk it and hike north on the AT hoping to find a suitable stealth camp – one that would protect us from the coming rains. It only took about 15 minutes of hiking, but we found a nice spot just off trail and made camp. I cooked by headlamp and went bed just as rain was starting to fall.

I’m going to miss hiking with Savage. We’ve been doing this thing together since the beginning – she’s become my defacto trail sister. We look out for each other. I’m sure I’ll see her soon.

I’ve gotten a few emails from folks following my hike and have gotten some great feedback – keep it coming. I asked one reader if there was anything I could be clearer on, any facts that I may have glossed over – and I got a list. I’m actually thankful I asked.

Trail names was the first thing mentioned so I’ll start there. I didn’t give myself my trail name (most people don’t). Savage and Kool Aid started calling me Cool Dad way back in GA because they overheard me going back and forth on the phone with two different hotels trying to find the one with the best amenities and cheapest rates – a very dad thing to do. But I’m Cool Dad – just like a dad (apparently), but cool. I also pre-hang my bear bag (very dad-like).

I’m texting Savage to see if I can get permission to tell her trail name story. It’s pretty funny actually.

I intend to address the other questions that have been raised as I go along. Again, many thanks for all the interest!

The plan for tomorrow is to make it just over 20 miles to the Rock Spring Hut, stopping at the Big Meadows Wayside for a burger. I’d like to hike further, but really need a good night’s sleep. Plus, I want to see what this rain is going to do.