It happened again – I woke up with water in my tent. This time the rainfly came partially off in the night and water splashed in (I can’t figure out how it happened). It wasn’t too bad – just enough to ensure that my sleeping bag was damp.

It wouldn’t have been so bad had it not been in the low 40s. I put on my last pair of dry socks and shivered as I slowly started packing up. I called out to McDoubles and Black Santa – they were both pretty cold as well.

McDoubles suggested heading back up to the Big Meadows Wayside after breaking camp – he wanted a hot breakfast. I agreed, telling him I’d meet him there.

It took quite a while for me to finish packing this morning – I stuffed everything that had to stay dry in a Ziplock. It didn’t matter if it was already in a dry sack, it went into a Ziplock before going back in the dry sack. I finally took down my soaking wet tent and made it to the wayside by 8:30.

McDoubles was finishing breakfast when I arrived. I sat down in the diner and ordered breakfast – Black Santa soon followed. The three of us ate and discussed our plans for the day. The rain was really coming down.

I checked my phone and saw I had a message from Savage – she was heading back to the trail this morning and wondered if we needed anything. The three of us discussed the possibility of heading into town two days early. I didn’t “need” a zero day, but I did need clean clothes and a chance to dry out my tent.

The forecast looked grim – more rain with temps in the 40s all day. That was enough for me. I texted her and asked if we could get a ride to Luray, VA, the closest town. She said her and her date would be there in an hour. Thank God.

Seriously. As I ate, I watched other hikers come in from the rain. I saw Juan approaching and walked to the door to greet him. He was in the same state as us – frigid and wet. He wanted to get off the trail as well.

I walked back to the table and finished breakfast. Black Santa, McDoubles and myself talked about our going into town only three days after taking a zero. I was perfectly fine with the decision – I’m not equipped to hike in winter-like conditions, simple as that. We all had already shipped our winter stuff home – and my Walmart sweats and Dollar General women’s yoga pants just weren’t cutting it.

Savage and her date (damn, I think it was Matt – really nice guy, I approve) arrived at 10:30 and, after they had breakfast, we were on the road just before noon.

We dropped Savage off at the Loft Mountain Wayside (she kept her winter gear – good job) before making the drive to Luray. Matt drove us to the Best Western and then dropped us off at the laundromat before leaving. 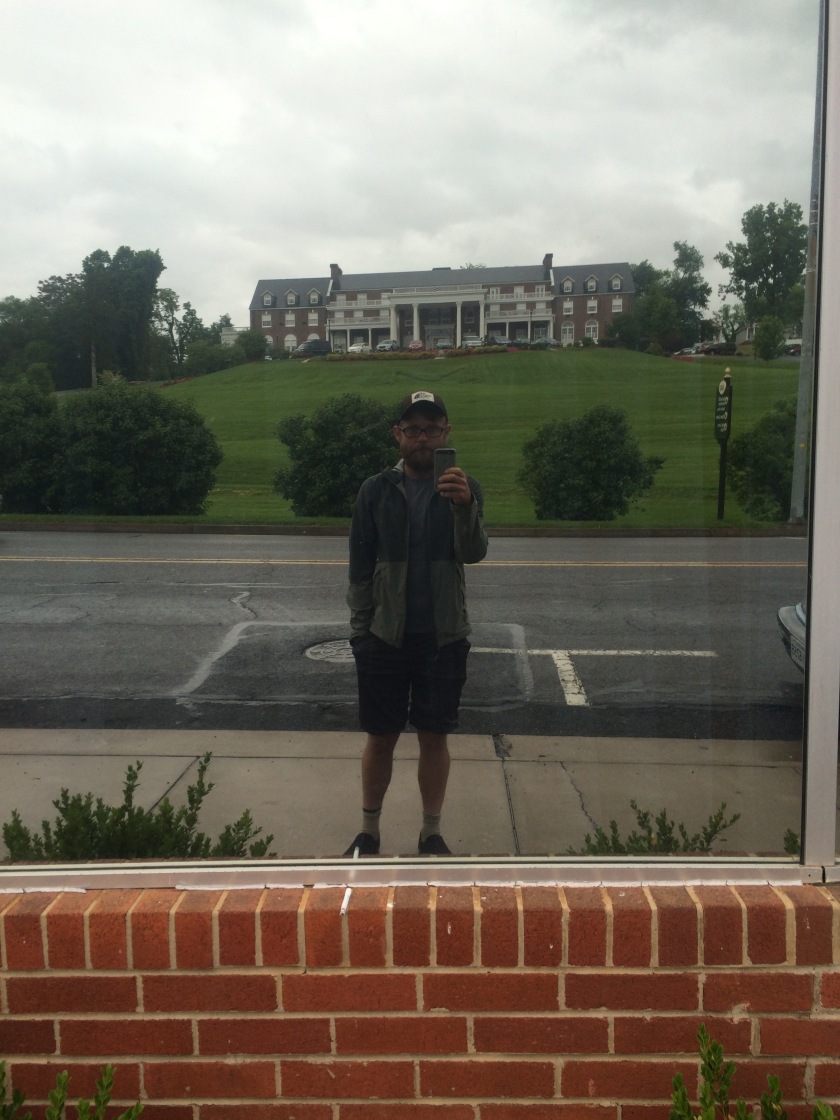 McDoubles, Black Santa and myself had lunch at a Mexican restaurant before walking back to the hotel. I layed down to take a nap.

I woke an hour later and started cleaning my gear. I found a small hole in the floor of my tent and patched it before laying it on the covered sidewalk to dry.

I was a little disappointed in myself and not in a good mood. I layed in bed for most of the afternoon letting my phone and external battery charge.

We eventually ordered pizzas – I started writing while we watched soccer on TV.

I am more than a little disappointed in myself. The weather got to me. I’ve been hiking in the cold rain for weeks – today I threw my hands in the air and gave in. I don’t like being idle. I’m here to hike the AT, not hang out in hotel rooms.

The plan is to get back on the trail tomorrow and start moving north. I’ll have clean clothes and a dry tent. The forecast calls for more rain, but with warmer temperatures.

I can’t wait to get to Harper’s Ferry so I can return my tent to an REI – I just don’t like the Quarter Dome 2. I miss my old tent, busted rainfly and all.

I’ve been forgetting to include my food diary these past few days. My bad.

Breakfast: one biscuit and gravy, one buttermilk pancake, side of turkey bacon

Dinner: half of a ham, broccoli and banana pepper pizza

Note: I’m uploading this on Monday morning from the Best Western in Luray, VA.

I woke to the sound of heavy rains hitting my tent. I grabbed my headlamp and checked for leaks – I was as dry as can be expected. I’m still a little paranoid after all that water got in the new tent the first night of Trail Days. It was 6:00am, normally the time I’d be waking up. But not today. I was warm and dry inside (for the first time in recent memory) while it was cold and wet outside. I allowed myself to drift back asleep.
I woke again at 8:00 – by now the rains were tapering off. I slowly started packing up, careful not to leave the warmth of my sleeping bag – this sleeping pad I bought works great. It just looks ridiculous.

I left my tent twice – once to use the bathroom, then again to retrieve our bear bags. I ate a quick breakfast from within my tent and attempted to take my tent down from the inside. I eventually got it – it was just a lot easier with my Dash 2.

It was 10:00 by the time I was ready to go. McDoubles took off – Black Santa and I hung around camp looking at the AT Guide. Today looked easy enough – only a few summits under 1,000 feet in elevation gain.

We started hiking at 10:30. It was foggy, cold and drizzling as I started – little did I know it would only get worse as the day wore on. I was moving slowly – so was Black Santa. I couldn’t figure it out – my muscles ached and I was very tired (even though I slept over eight hours). 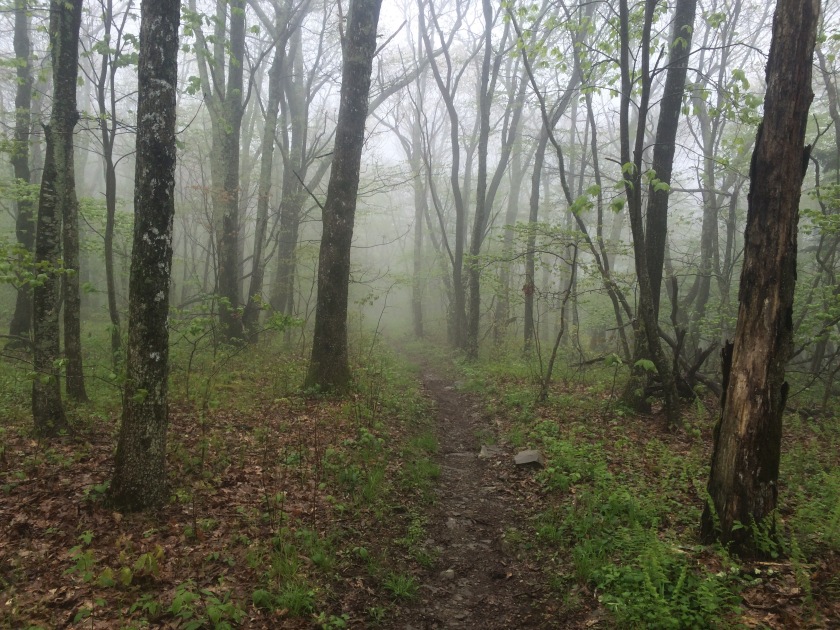 I tried eating snacks as I hiked up Baldface Mountain. I couldn’t find a rhythm and kept pausing to rest. I haven’t felt like this since my first day back from Trail Days. The weather wasn’t helping either. It was only slightly too warm to wear a rain jacket, but too cold and wet to pause for more than a few minutes before getting chilly.

Halfway up Baldface, we we stopped at the South River Picnic Area to use the bathrooms. I took advantage of the space inside and cut a good six inches off the side of my sleeping pad – at least now it fits under my rain cover.

After traversing Baldface, the AT gradually descends towards the Big Meadows Wayside – my intended stop for a late afternoon lunch. Even though I was hiking downhill, I still couldn’t find any momentum. 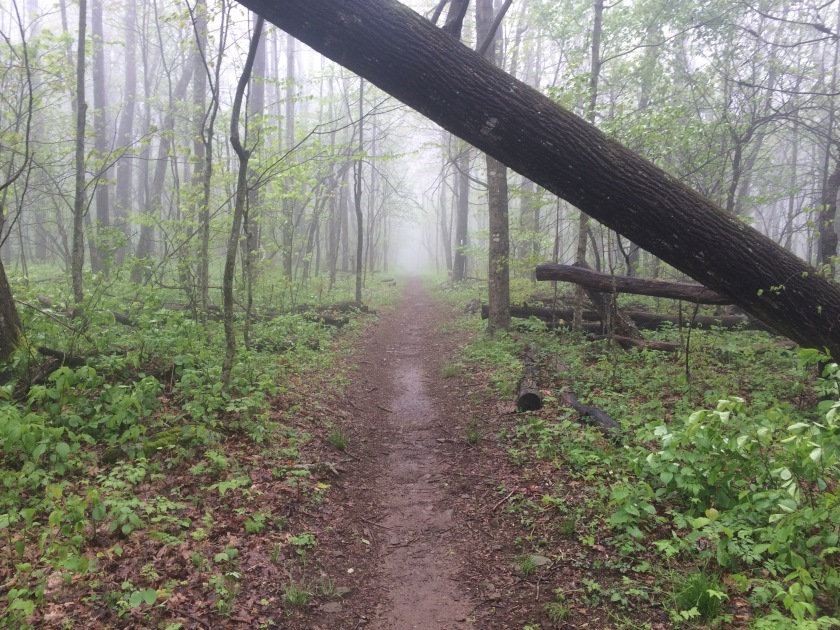 Black Santa and I stopped at the Lewis Mountain Campground to refill water. It was 3:00pm and we had only covered eight miles all day – we still had seven miles to hike before hitting the wayside.

Black Santa suggested I take the lead and we left for Big Meadows. I stayed in front, hiking alone in the rain and fog. I only passed two other thru-hikers today – and I hadn’t seen a single southbound hiker, thru or otherwise.

I caught myself moving slowly again – this time, it was a good thing. I stumbled across a rabbit right next to the AT. He didn’t seem afraid of us one bit. He hopped within a few feet of me and chomped on small plants. 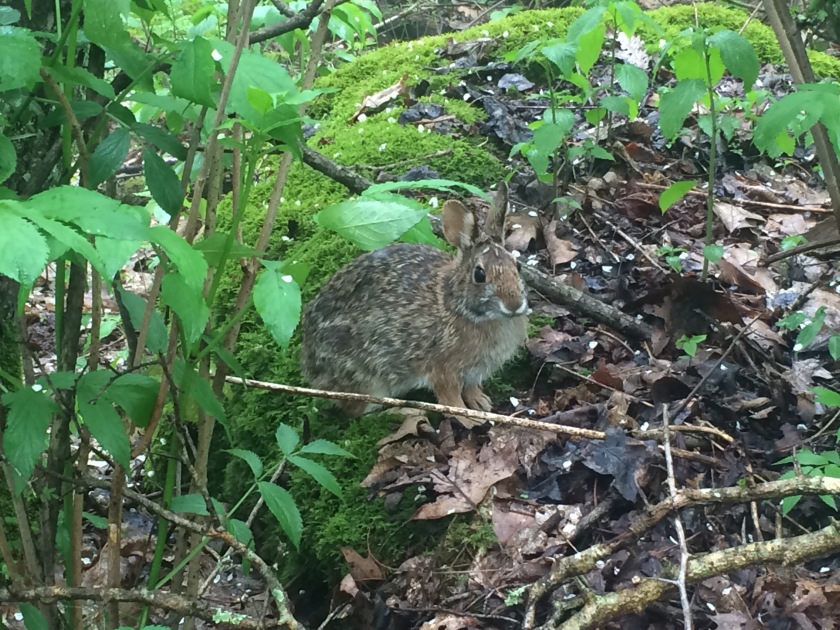 I started hiking again with a quicker pace. The temperature had dropped noticeably – fog was rolling in again and the rain was picking back up. 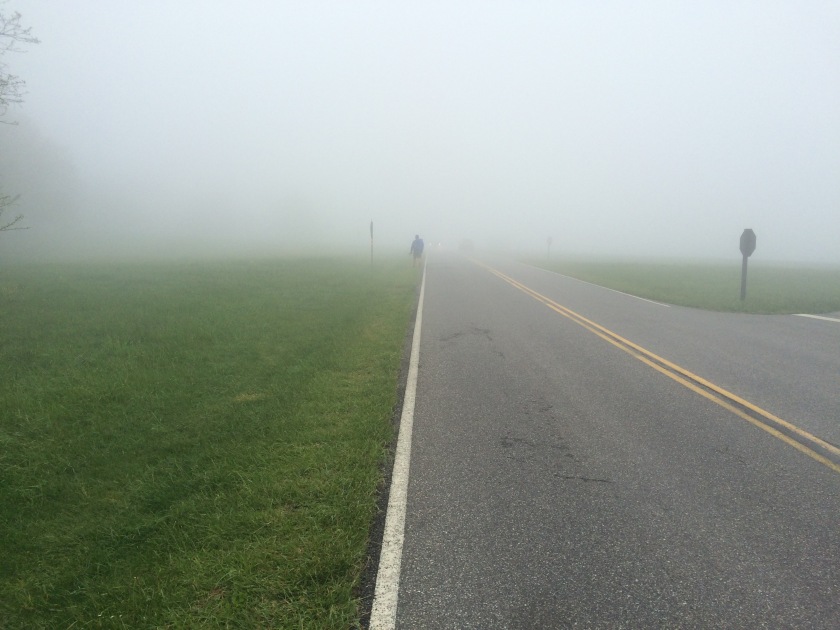 I made it to the Big Meadows Wayside just in time to catch McDoubles – he had already eaten and was ready to press on to the next hut. Having skipped my hot lunch, I was starving. Instead of grabbing a seat in the diner, I went straight for the snacks – crackers, granola bars, cookies, broccoli, apples and bananas. I spent just over $20 on snacks alone.

While I was eating, I told McDoubles I saw a pretty good campsite just off trail – he really wasn’t in the mood to continue hiking in the cold rain either. Black Santa and I stowed the rest of our snacks in our packs and the three of us left the wayside and headed off to make camp.

We arrived at 7:30 – the rain let up just enough for us to pitch our tents and cook dinner before starting up again. Cold and wet, I zipped the door on my tent before the sun set and started writing. 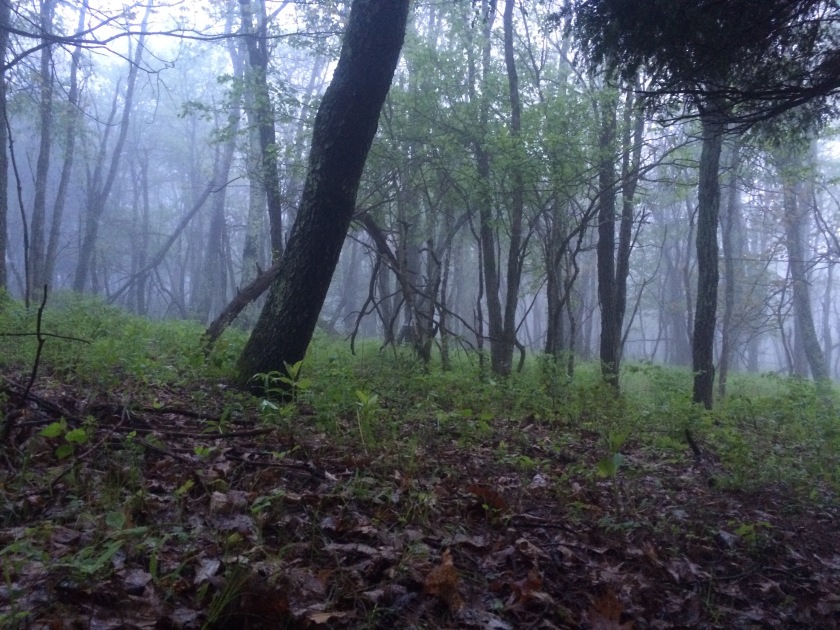 It’s getting noticeably colder as I type. This stinks. I pulled everything out of my pack to take an inventory of what’s wet versus what’s dry – and there’s not much in the dry category.

I’m down to my last change of dry clothes. I hope it’s sunny for at least a part of the day tomorrow – I really need to spend some time in the sun drying out my tent and clothes.

McDoubles was able to see the forecast for the coming days while he was at the wayside and it doesn’t look good. It’s gonna get really cold tonight (back to the low 40s again) and keep raining for another two days.

That’s how long it should take me to exit the Shenandoahs at Front Royal, VA, now 46 miles away.

I must have had cell service at the wayside today – a whole dump of texts and emails came through at some point (my phone was in a Ziplock pretty much the whole day).

Savage got her hitch yesterday and ended up back in Waynesboro – apparently she couldn’t get a ride to Luray. She’s enjoying her date and is looking forward to being back on the trail tomorrow.

She also gave me permission to tell her trail name story, so here goes:

Mary didn’t start backpacking (or even camping for that matter) until a year ago. She took a road trip with some friends and did a few sections of the AT – that’s when she first heard of the AT and the idea of thru-hiking.

One night, she and her friends decided to sleep at a hostel. They stayed up a little late with the caretaker having drinks. One of her friends didn’t want to finish his beer, so Mary (all 120 pounds of her) grabbed his beer and finished it for him, calling him a sissy right before doing so.

The caretaker and her friends were impressed – they dubbed her Savage. Her friend didn’t have a trail name yet either – he became known as Lightweight.

I’m really starting to get sick of this cold rain. I can handle one or the other just fine, but not both. It’s nearing the end of May – come on Mother Nature.