.I woke up to a hissing sound coming from outside of my tent. It was 6:15am and someone was deflating an air mattress. That meant someone in my hiking group was getting ready to leave. I immediately started packing up.

I emerged from my tent 20 minutes later to find Medicine Man in a similar stage of breaking camp and Moon Boots already gone. It was Moon Boot’s declared goal of reaching Ash Gap – two-thirds of the way up Roan High Knob at 5,500 feet and over 20 miles from where we were camped that evening.

I left camp at 7:10 with Medicine Man on my heels. It was cold – I started hiking in full winter gear as the sun was starting to rise.

The first summit of the day was Unaka Mountain, itself an impressive gain to over 5,000 feet. Unaka was very cool. As I approached the top, I found myself in a dense spruce forest – I wouldn’t have known they were spruces had the AT Guide not pointed it out.

The trail was difficult to find amongst all the trees – I found myself pausing several times, trying to find a white blaze indicating I was still on route.

About six miles up trail, I came to a road crossing and ran into some trail magic. Although I was now hiking in a t-shirt with my pants rolled up, I stopped to have coffee and chat – even scored a snack for down the road.

As I was packing up to leave, Medicine Man rounded the corner. He grabbed a quick cup and the two of us set off for a spring to refill water. As we were nearing the spring, I saw three deer – they took off running as soon as we approached. There was no chance of getting a picture.

After a quick break in what looked like an old orchard, we both set off again. Moon Boots was still ahead and it was nearing lunch time. Today was far from easy – there were several small climbs that really seemed to come out of nowhere and slow me down. We stopped a quarter mile shy of Greasy Creek Hostel and had lunch.

We were hiking again half an hour later, fully recharged, and ran right into Moon Boots – he stopped at the road crossing leading to the hostel to take his lunch. We were right behind him the whole time and had no idea.

The next few miles were fairly easy, but I wasn’t going to be fooled. The last third of the day called for the steep ascent up and down Little Rock Knob, followed by the three-mile ascent of Roan. 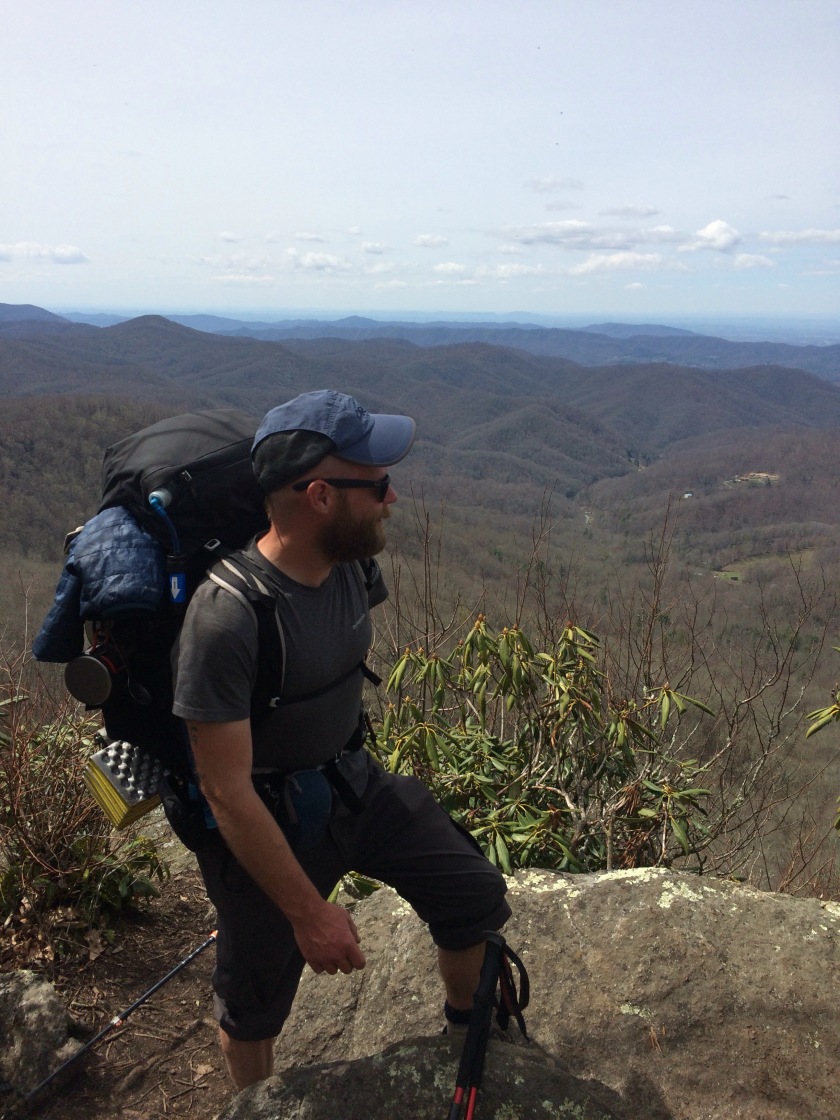 I handled Little Rock Knob fine – and was even rewarded with trail magic at Hughes Gap. This time snacks from another thru-hiker’s parents – it was good timing.

The three of us started pressing up Roan. Ash Gap was supposed to have an unreliable water source. That meant I filled up 4 liters (nearly 9 pounds) at a spring 2.5 miles away from camp. What can I say? I like water. But that made my pack heavy and I slowed down considerably.

The climb up was rugged and beautiful – it’s a good feeling knowing you’re only a mile from camp and can slow down. I’ll be honest, if had to hike any further that I did, I would have had to stop and eat. But I pressed on and made it into camp at 5:30.

The campsite is nice – there is actually water up here, too. I set up my tent and was getting ready to cook dinner when Clutch came in. The four of us ate with some other hikers stopping for the night and, after a peaceful sit by the fire, we all started to get ready for bed.

We had been debating for the last couple of hours whether or not the rest of our group would make it. As Moon Boots and I were extinguishing the camp fire, we saw a pair of headlights roll into camp. Savage and Canuck had finally made it.

They got distracted at by the promise of cold drinks and ice cream at the Greasy Creek Hostel and decided to make it a long day. It’s 9:30 now and Shaggy still hasn’t made it to camp.

Tomorrow looks like fun – I’ll be hiking at or near 6,000 feet for the first half of the day before losing elevation considerably as I approach camp – in all, probably close to another 20 mile day.

I’m still committed to reaching Damascus in five days now – that’s 96 miles away. While tomorrow may prove a little challenging, the next four days have some of the flattest terrain I’ve come across yet. I’m excited to see how well I move.

One area of concern is my left heel. I developed a blister today and treated it as soon as I made it to camp. I applied Neosporin and bandages before taping my whole heel up in athletic tape. It shouldn’t be a problem tomorrow – here’s hoping anyways.

Twice today, we ran across hikers battling shin splints – one was getting off the trail at the hostel and the other was trying to take it easy by slackpacking (hiking without your pack, often from road crossing to road crossing so someone can pick you up). Moon Boots is also suffering from a mild case. This trail is more brutal than I thought, for sure.