Motivated by yesterday’s good hiking, I woke early, ready to go. I was packed and leaving camp by 6:00. Certain others would soon be following, I started heading up Roan High Bald, hoping to catch the sunrise.

I was sluggish and moving slow. To make matters worse, the blister I treated last night was beginning to sting. I stopped after a mile and changed bandages – temporary relief at best.

While the trail was beautiful (I was again hiking through a spruce forest), I wasn’t rewarded with any views. The descent down Roan was steep – I somehow missed the shelter at the top. I eventually made it the 4 miles to Carvers Gap. My heel was starting to hurt again.

The trail crossed Carvers Gap and immediately starts ascending Round Bald, the first of many balds I would traverse today. 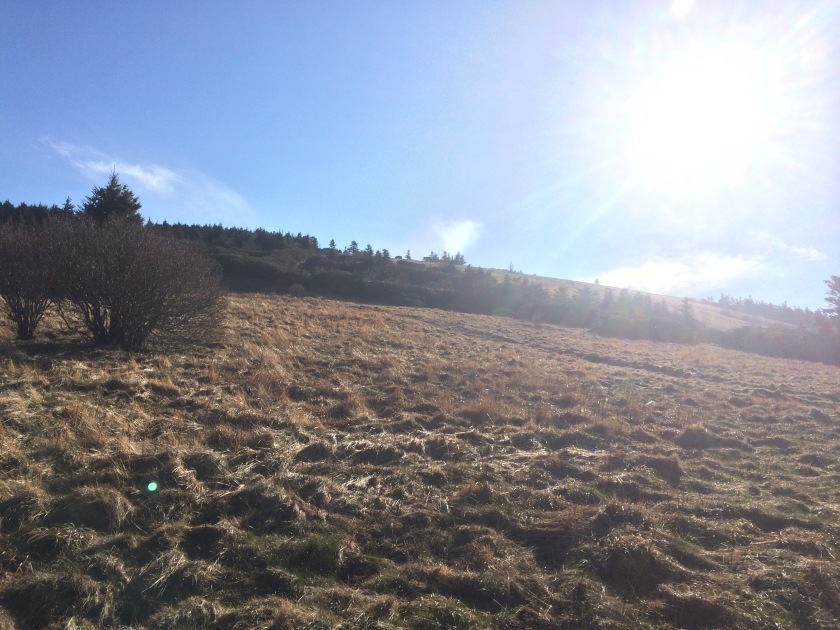 I continued following the ridge and paused at Jane Bald to take a break. I took my boot off and changed bandages again, this time taping my heel tighter and in different directions. After a short snack, I began pushing forward again.

After Jane Bald, the trail descends into the woods. I stopped just short of Stan Murray Shelter at 10:30, having only covered 8 miles on the day. I still felt a little sluggish and my heel was still hurting – although now only when I ascended. It was fine on the downhills.

I decided that I needed a hot lunch. I never make hot breakfasts or lunches, choosing to reserve fuel for dinner only. I hoped that a warm plate of food might give me that extra energy needed to start making miles. Regardless, it did feel good to sit and rest.

I passed Overmountain Shelter, a cool, old barn now repurposed for AT hikers.

Overmountain Shelter also marks the beginning of the ascent up Hump Mountain – supposedly the last mountain at this altitude for quite some time. 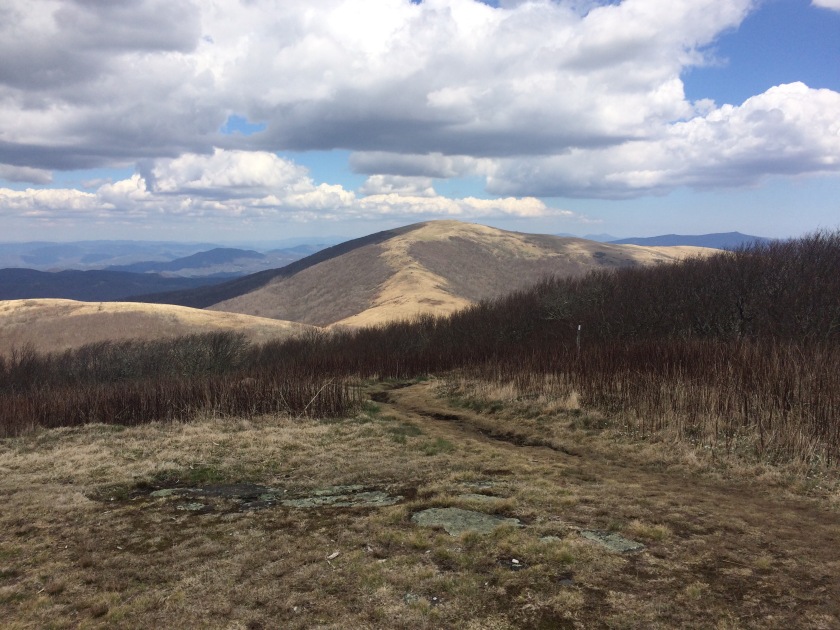 I finally made my way to the top of Hump Mountain and took a break. I was about to begin the long, steep descent towards Roan Mountain, TN (a tiny town just off the trail). I initially planned on camping a few miles short of the road crossing, but decides to try to hitch into town given my dwindling supply of Band-AIDS and athletic tape.

During the descent, I hit a milestone – I officially left North Carolina. That’s two states down – and I’ll only be in Tennessee for another three days before entering Virginia – pretty neat.

After successful hitches to and from Roan Mountain to purchase Band-Aids and tape (and a few more meals, considering how much I enjoyed today’s hot lunch) from the Dollar General, I made my way back to the AT.

I still had not seen any of my hiking buddies all day – I actually hadn’t seen anyone. I called Medicine Man on a whim and he picked up. Apparently, he was only two miles back and apologized for not catching up.

As he was descending Hump Mountain, he stumbled across an injured falcon (or hawk) – it had a broken wing. Apparently, he’s done this before – he caught the bird in his sweater and started carrying it towards the road crossing in hopes he’d get cell coverage.

He was now making his way towards me – with Shaggy and the injured raptor in tow. I set up my tent and started a fire. Sure enough, 15 minutes later, they arrive. I started helping Medicine Man construct a makeshift cage by jamming sticks in the ground and covering them with extra clothes. 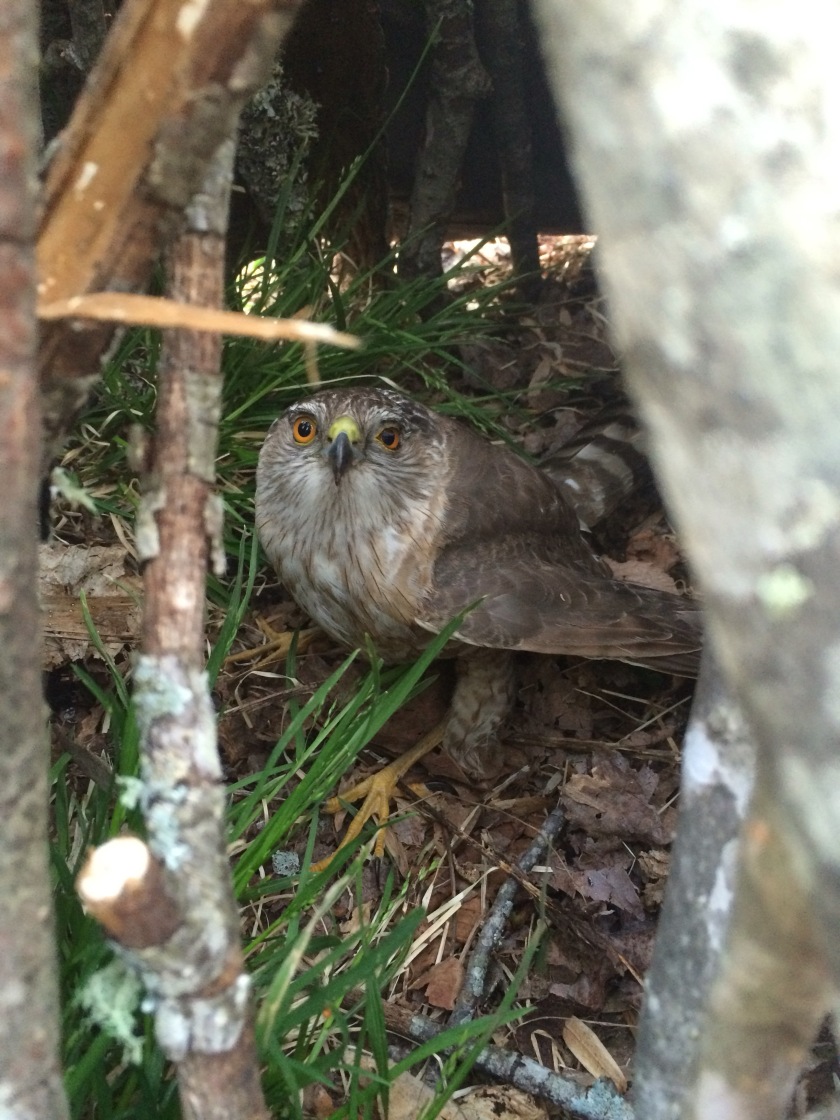 What a day. Apparently the Carolina Raptor Society will be calling me at 8:00am and will hopefully come to get this bird. He/she really is a beautiful creature.

I made a quick dinner and hopped right in the tent.

When I took off my socks tonight, my heel looked a little better. I hope I got to it early enough.

Neither Shaggy nor Medicine Man know how far back the others are. I’m sure they’ll catch up – there’s nothing but flat ground ahead.

With the extra food I snagged from the Dollar General, I have more than enough to get me to Damascus – it’s 75 miles away and I have a solid four days worth of food.

I need to rent a car once I get to Damascus to get to an REI. It’s time to return my tent. It’s pretty beat up for only a little over a month on the trail. Plus, I need to buy new boots – my Merrells are starting to feel a little flimsy. Then there’s the summer sleeping bag I need to buy and new hiking t-shirt. I figure it’s better to rent a care and drive to an REI (where I have my member dividends to spend) than shell out bucks at some outfitter in Damascus.

Dinner: Broccoli and cheese Pasta Side with canned beef, wrapped in tortillas.