I woke at 7:00 – kind of late for me. I was first out of my tent and went over to check on the hawk/falcon – it was still alive, very alert to the movements around its teepee-cage.

Medicine Man and Shaggy woke up as I was breaking camp. We sat around waiting for 8:00, expecting a call from the Carolina Raptor Society. When no call came by 8:15, Medicine Man and I hopped on the phones.

I eventually got in touch with some student volunteers from Lees McRae College – they help staff an animal rehabilitation clinic that takes in injured birds of prey. Because they were so close, we decided to meet one hour later at the trailhead.

The goodbye between Medicine Man and Vladmir (the hawk) was touching. He handed the bundled Vladmir to the veterinary student who placed him/her in cage. Apparently, if Vladmir pulls through, Medicine Man will be invited to his release back into the wild.

Right before the hawk exchange, Clutch rolled into camp. Apparently, he tented just a few miles away from us and was ready to move. The four of us set off at 10:30, with no clear goal on how far we should shoot for today. Saving Vladmir took some time. I decided to hang back for a little while – I had cell reception and was desperately trying to figure out a way to get to an REI.

While I’d really LIKE to exchange my tent, I really NEED to buy new boots. I’ve read that long-distance hikers’ feet will grow by a full shoe size over the course of the hike. I’m beginning to wonder if my heel blister and toe nail pain are related. Truth be told, the only reason I didn’t rent a car and drive to Asheville this morning is because I couldn’t find one – the Bristol NASCAR race is this weekend.

I put away the phone and started hiking at 11:00. After a difficult little push out of the valley, the trail leveled off and I started making some really good time. While my feet were certainly sore, everything else was doing fine. 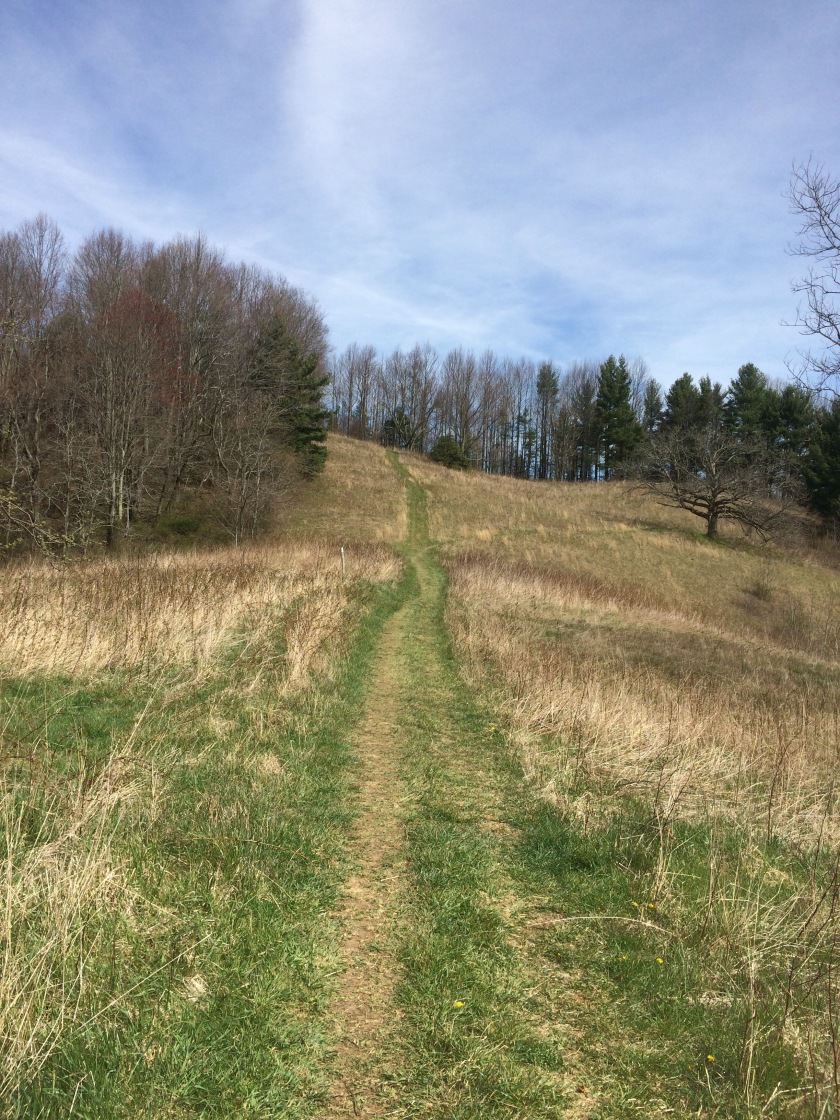 If I wasn’t walking across fields, I was strolling through pine forest, with only minor ascents and descents for several hours. At around 2:00pm, I turned a sharp corner in the trail, and ran right into Shaggy, Medicine Man, and Clutch having a hot lunch. I plopped right down and joined them. After a quick break, we were off again.

At 4:00, we came across a park bench – a store-bought, wrought iron bench, that someone had lugged up the trail. We paused to talk about our options.

My personal push to Damascus puts me on par with Shaggy and Medicine Man’s push to Hampton – we all want/need to be in Hampton by tomorrow morning. For me, Hampton is only 47 miles away from Damascus – easy to accomplish in my self-imposed drive to Virginia, now in its fifth day (3 days left).

Shaggy has new boots waiting for him at the post office. The only problem is that they close at 10:00am tomorrow.

And Medicine Man is meeting his parents in Hampton. They’re driving Summer, his golden retriever, down from Massachusetts to hike the AT.

After consulting the AT Guide, we saw that there was a hostel only three miles outside of Hampton – and they offered shuttles. Shaggy could get his shoes, Medicine Man could get his dog, and I can be that much closer to Damascus. Clutch was just along for the ride.

The problem with the hostel (Black Bear Resort) was that it was 14 miles away and we had a few nagging climbs ahead. I made a quick call and was happy to hear that the four of us could get a cabin for $45 (shower included – it’s been 5-plus days without a shower). The catch was that we needed to get there by 8:00, 8:30 at the latest, to secure the cabin.

Fourteen miles (plus the half mile trail to Black Bear) in four hours is well outside of my hiking ability. I would need to be hiking as fast as I could, for four hours straight, to make it on time. Thankfully, we’ve got Clutch.

He’s Swiss-German and one of the strongest hikers on the trail. Within 5 minutes, he was well ahead of us. Although the hostel reservation was on my card, I gave Clutch permission to get the room.

I was feeling good. I couldn’t feel any pain in my heel or toe and pushed as hard as I could – at times literally running down the trail just to gain a few extra minutes.

At 7:30, Medicine Man, Shaggy and I stopped to check our distance away from Back Bear. We were at the top of White Rock Mountain and the hostel was 4 miles away. I quickly called to explain that we were sorry and should be there within an hour. The caretaker was completely fine with waiting, but I felt bad. I had been hiking hard all day and it was looking like I was going to come up a few miles short of my goal.

I was still feeling strong. At first, I just started jogging down the mountain, using my trekking poles to hop over rocks and logs. Then I started building momentum – it began to feel not that unnatural to run with my pack on. I paused to take a quick picture of the setting sun and zoomed on.

I must have looked “crazy and insane” as I ran down that mountain. I spooked some hiker tenting just off trail – he was walking around with his shirt off and I came barreling down the trail. He jumped and yelled. Because I was watching roots and rocks whiz beneath my feet, I didn’t see him. I screamed out loud and kept running – I didn’t stop to give an explanation.

I reached Dennis Cove Road and checked my watch – 8:05. I was a short ten-minute walk away from Black Bear Resort. I put my trekking poles away and started strolling down the street. At 8:15, I walked through the front door and nearly right into Clutch. He was finishing a pizza – he had been there for half an hour.

While I didn’t meet my goal, pushing myself hard had it’s advantages – I was the last customer to buy snacks from the camp store. I bought a whole bag of stuff – enough for Medicine Man and Shaggy to share when they finally arrived. Medicine Man was maybe 20 minutes behind me – Shaggy another 30 after that.

But when he did arrive, the three of us feasted. I was starving. After dinner, I noticed a couple trout fishing by flashlight outside our cabin. I spoke with husband for a good half hour. When I returned, everyone was asleep.

Right now, I’m sitting on porch. My legs feel good, but my feet hurt terribly. I’m actually a little concerned. My toes are red and my heels are raw. When I make it to Damascus (hopefully in three days), the first thing I’ll do is buy a new pair of boots.

I’m feeling good about this past week – this is how I want to be hiking.

While I was hiking today, I got a message from Savage – Moon Boots woke yesterday with bad ankle pains, his shin splints flaring up. The three of them (Canuck included) decided to stay at a hostel tonight in Roan Mountain – that puts them a full 25 miles behind. I hope all is well. As I’ll probably be staying two nights in or near Damascus, I’m sure I’ll see them.

Snack – Little Debbie Brownie, the last of my beef jerky