At around 9:30 last night, a thunderstorm hit our makeshift camp. I was nearly asleep when it struck. I quickly turned on my headlamp and checked the walls and floor of my tent – no leaks. I don’t remember when I drifted to sleep, but I do remember waking at around midnight to more driving rain and thunder. I slept restlessly the rest of the night.

I woke again at 5:30. By now the rain had stopped. The inside of my tent was dry – that’s all I cared about. As I was considering waking up, I fell back asleep, only to wake again at 7:30 – this time for good.
I packed everything I could before emerging from my tent. It was still cold, but at least I was dry. Before I fell asleep, I changed into my damp shorts – the body heat trapped in my sleeping bag completely dried them out.
I was expecting the cold when I finally stepped outside – I was not expecting the fog. I hadn’t seen fog this thick in a long time. Medicine Man, Shaggy and Clutch were still in their tents and I was nearly ready to go.

I walked over to the tree line and chatted with Canuck, still hanging in his hammock. He was awake and ready to start packing. I returned to our camp by the side of the road and spoke with first Medicine Man, then Clutch and Shaggy. The three of them were contemplating heading back to Damascus to dry out.
I was honestly tempted (for maybe had a minute), but decided to press on. Canuck wanted to eat before following. I left the guys at the roadside, not knowing what their final decision would be, and headed north into the fog.
It was cold still – the front that brought all the rain had not lifted and I started my day in full winter gear (what I had left, that is). Despite my near-hypothermia the day before, I was hiking strong. I stopped briefly at Thomas Knob Shelter four miles ahead and had a quick snack before making the push to Grayson Highlands State Park and the wild ponies.
It being a Saturday, I encountered numerous weekenders and section hikers as I made my way into the park. It was stunning. The Grayson Highlands easily make it to the top of my list as one of my favorite hikes to date. 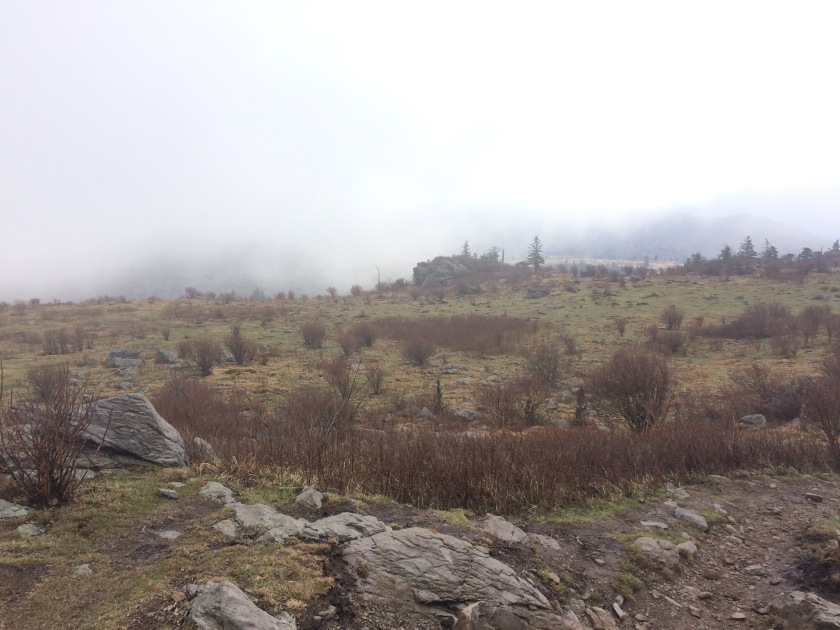 I traversed rocky balds covered with green grass for miles. I saw a few ponies from afar, but didn’t got close enough to get a good picture. As I was hiking, the clouds starting breaking up and the sun began to shine. It was still windy and cold, but the view was remarkable.

At the north end of the park, it finally happened. I turned a bend in the trail and came face to face with a grazing pony. He/she looked at me and started shuffling my way, stopping near a patch of grass at my feet to continue eating. This was my pony.
My pony was little – it looked more like a donkey than a horse. But it didn’t matter. I was checking off a major AT milestone – I got to pet a wild pony in the Grayson Highlands. It was awesome.

Another milestone came to me shortly thereafter – I crossed the 500 mile mark and continued hiking. 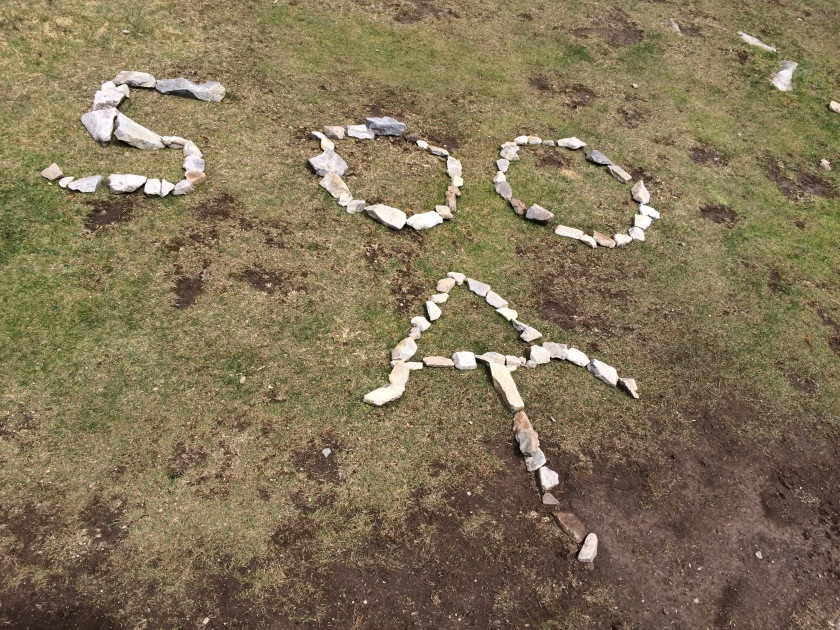 I was fairly certain the guys that stayed behind would wind up in Damascus. And I knew Savage and Moon Boots were somewhere ahead. I decided then that I would bypass the next two shelters and make camp when it got dark or when I got tired.
After leaving the Grayson Highlands, the AT loses altitude – I soon found myself hiking in Rhododendron groves at 3,000 feet. It was noticeably warmer – I started hiking in shorts and a t-shirt once again.
I soon found myself in at Fox Creek having already hiked 20 miles on the day. I paused at the base of Chestnut Flats to consider my options. I had enough daylight to make it up and over – doing so, however, would mean that I was probably going to be setting up my tent at sunset. I pressed hard.
The AT Guide listed three possible campsites as I made my way to Dickey Gap. The first two were unoccupied. I decided to stop at the third to filter water. As I made my way down to the creek (headlamp on), I caught a pair of eyes glowing back at me.
It was a huge coyote – we ended up spooking each other. He/she froze in the beam of my light for a good ten seconds before slowly turning and slinking away. My rational mind said that it was okay – coyotes aren’t predators like wolves. But my normal mind was scared. I wanted to get the hell out of there as fast as possible.
I ended up stopping at Dickey Gap, right at the trail head for the Raccoon Wilderness. It was dark. Instead of camping in the grassy field by the road, I decided to pitch my tent right on the AT next to a informational display.
I crawled into my tent in the dark and contemplated making a hot meal, but I was low on water. I had enough to drink throughout the night, but not enough to cook. The weather got chilly, but I crawled into my sleeping to get warm before I started writing.
On tenting near roads: I’ve never had any problems with townies messing with me – aside from the occasional late-night horn honking. But this was different – I was alone. I only decided to tent on the AT to protect myself. If I was in a group, tenting in the grass would not have been a problem.
Tomorrow, I should make it the 25 miles to Atkins, VA for a quick resupply. I’ll pass Partnership Shelter near Marion, VA – the only shelter on the AT where you can use a pay phone to call for pizza delivery.
I still don’t have cell coverage (haven’t in three days now) and have no idea how far behind or ahead the rest of my hiking buddies are.
Full disclosure: I was a little scared at first, this being the first time I’ve camped alone and having just run across the coyote. As soon as I got my tent set up and my gear stowed inside, I was fine. The illusion of security.
Breakfast: 30 gram Powerbar protein bar, the very last of my homemade granola.
Lunch: three beef jerky tortilla roll ups with yellow mustard.
Snack: the last of my mini banana Moon Pies
Dinner: Everything – the last of my dried cranberries, two bags of beef jerky, the last of my tortillas, half of a chocolate orange