I woke full of energy at 6:45 and was ready to start hiking by 7:30. I walked out the road to see if I had cell coverage – no dice. As far as I knew, Savage and Moon Boots were too far ahead for me to catch and Medicine Man, Canuck, Shaggy and Clutch too far behind to warrant me waiting around. I quickly ate and hit the trail.

If you look at a topographical map of the AT in Virginia, you’ll see that the trail largely follows ridge lines. This can be good or bad. Some ridge lines are cake walks – wide trail with a gentle grade. Others, like the one I was traversing this morning, where rocky and hard to navigate.

I stopped four miles in at the trail crossing leading to the Trimpi Shelter to have a quick snack. I met a few hikers leaving the shelter and asked if they had seen Savage or Moon Boots. They didn’t know Moon Boots, but said Savage had tented there last night with a hiker named “Push” – it had to be Maria, the same girl I made the 33.1 mile “push” into Damascus with.

I was elated – I had found my hiking buddies and they weren’t too far ahead.

Leaving the Raccoon Wilderness, the trail briefly enters private land and crosses a cow pasture. I was making good time. After crossing a country road, the trail ascends and follows one of the aforementioned rocky ridge lines. It was beautiful, but all the views were obscured by trees.

I stopped to gather water about 3 miles from Partnership Shelter. Two things happened – first, I was attacked by mosquitos. It was the first time on this trip I had to put on bug spray (and not as a preventative measure). Second, my phone started chirping. Emails were coming through. I had cell coverage! After pausing to make a few quick calls, I pressed on.

I was still making good time, checking my GPS and figuring my average MPH as I hiked – today I was averaging between 2.5 and 3 miles per hour.

As I approached Partnership Shelter at 1:30, I came across a tent city. At first I was jealous – looking at all these hikers tenting together and having a good time. 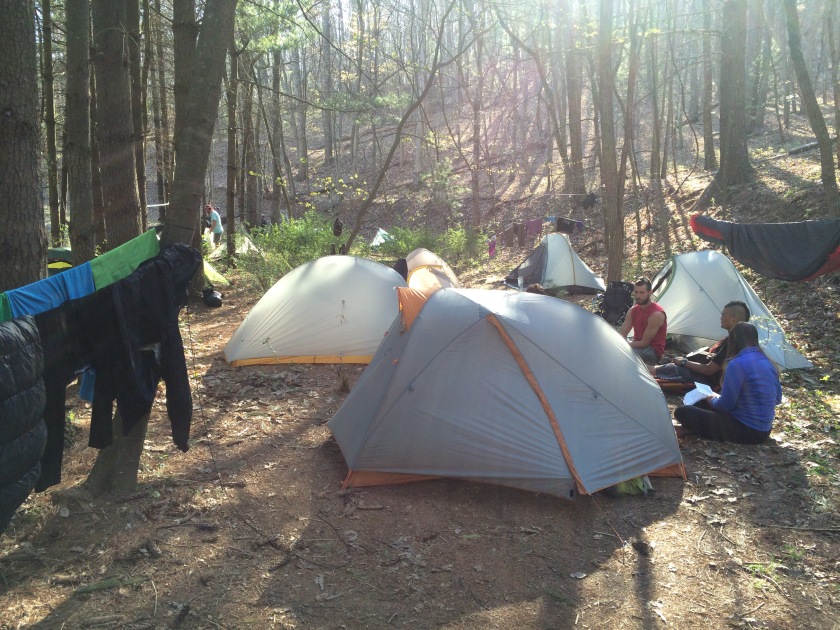 Then I heard a “Cool Dad?”. It was Savage and Push! Then Moon Boots stuck his head out of a tent! Monster, Wanderer (or Juan – still haven’t asked his preference), Oriole and Sweet Potato were with them.

This tent city I had previously been jealous of was stocked with my hiking buddies and other hikers I had gotten to know better over the past week. Awesome!

I immediately threw down my pack and laid out my tent to dry in the sun. We all started catching up on what had happened over the past two days.

Moon Boots and Monster (aptly named because he’s huge – and ex-military from Germany) decided to put in their first 30 mile day. They had been tenting at Partnership since the night prior. Savage and Push held back and did a more moderate 20 mile – 20 mile to arrive at Parnership an hour before me.

Moon Boots, Savage and I started planning for the days ahead. It was decided that it just made sense to resupply in Marion instead of Atkins, seeing as how we were all here. I left the group to check to see if I had cell coverage closer to the road. I didn’t – upon my return, I was surprised to see that Canuck had arrived in camp. He ended up hammocking just three miles from me last night – presumably near the creek where I met the coyote.

Seeing as how it was now close to dinner time AND we were staying near the only shelter where we could order pizza, our entire tent city decided to put together a mega-order – seven hikers ordered $99 worth of cheap pizza. I alone ordered a large Stromboli. It was ridiculous – I only ate a third of it. 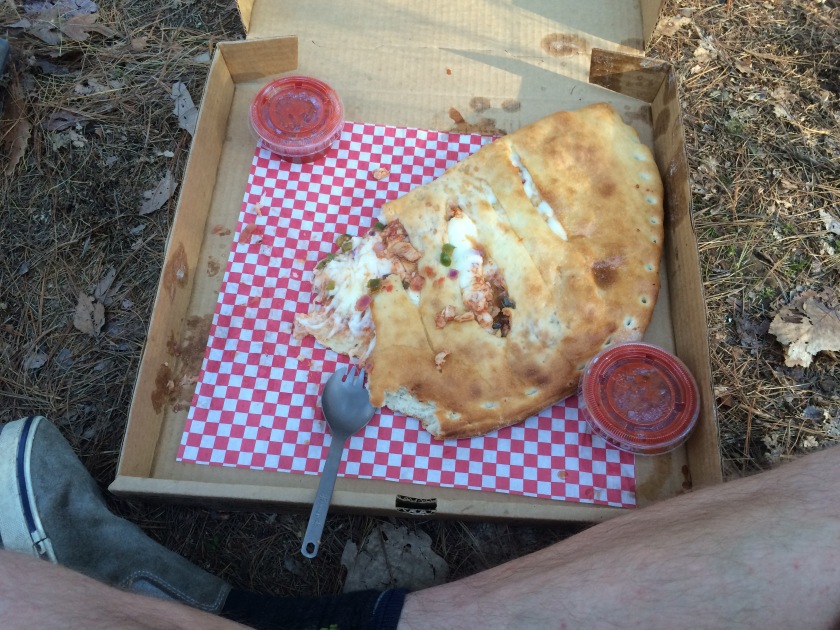 Canuck left camp to get a hotel room. I guess that got Moon Boots thinking. He casually asked if I wanted to split a room in Marion – he wanted to talk to his folks and I really needed to upload this blog. It was instantly settled. We quickly packed up and headed to the road crossing to hitch a ride.

Just under an hour later, Moon Boots and I found ourselves at the Travel Inn watching the Hawks lose to the Celtics. While he chatted on the phone, I made a quick run to Walmart to resupply, grabbing a pizza on the way home.

The best that I can figure, Medicine Man, Shaggy and Clutch went back to Damascus to dry out. Canuck informed us that he started hiking yesterday just an hour after me and the three of them were packed up and waiting for a shuttle.

Moving forward, the tentative plan is to leave Marion tomorrow at noon and hike to Atkins, VA – it’s only 10 miles away. There’s a hiker-friendly restaurant right on the AT that I’d like to eat dinner at. After that, I’ve got 90 miles to Pearisburg – if I leave Atkins Tuesday morning, I hope to get there by Friday night or Saturday morning.

On cell coverage – I’ve found that the strength of my Verizon coverage is directly proportional to the type of national parkland I’m hiking in. If it’s a national park, chances are I’ve got a strong signal. If I’m hiking in national wilderness (like I’ve been hiking in since leaving Damascus), I have zero coverage.

Tomorrow I’ll need to hit the Verizon store to get an upgrade to the iPhone 6. I’ve already used all of the storage (pictures) with my iPhone 5 and don’t want to delete anything.

I’m tired but feeling good. These new Merrell trail runners are working great. When I woke up the morning after my hypothermia-hike, my shoes were still soaked. After an hour of hiking, they had dried out completely.

The Hawks lost in overtime.

Snack (3 miles from Partnership): the last of my dried figs, beef jerky.

Late Lunch: a third of a Stromboli (the other hikers at Partnership ate the rest)

Dinner: Half of a Little Caesar’s pepperoni Hot n’ Ready

Walmart: $62.55 (Crap! I also bought a wireless speaker to listen to music while at camp. They’re very popular on the trail.)