I woke up early and immediately started packing. While it rained hard all night, it was quiet now. I wanted to get my tent down as soon as possible. I usually put my rainfly in a gallon ziplock to keep it from saturating my tent once it’s in the dry bag. Today, it didn’t matter. I stayed dry, but my tent and footprint were as wet as the rainfly. Everything went into the dry bag.
I chugged a soda as I finished packing – I was ready to go at 7:00. Had I waited a little while longer before setting up my tent last night, I probably would have tented with everyone else in the front yard. In addition to the four I hiked in with, Monster, Juan and Oriole tenting as well.
I sat my bag on the bench and had another soda as I watched folks pack. In time, the first hiker made her way across the river, her butt just a few inches above the raging waters. As soon as Black Santa was packed up, the two of us went across. I went first and he sent our packs over separately before coming across himself. 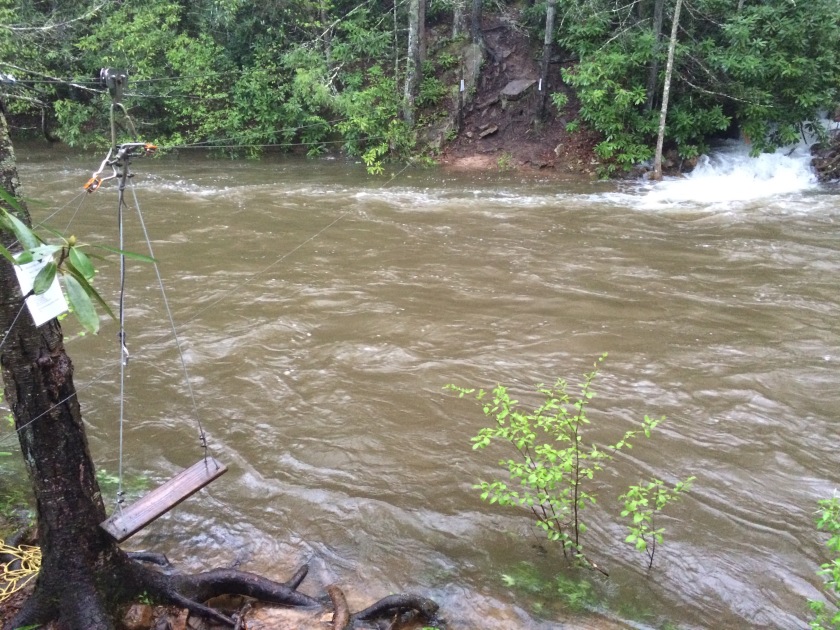 We crossed several flooded creeks and streams right off the bat – within 15 minutes, my socks were soaked. In places, the trail was an actually stream. Black Santa and I tried to clean debris from some of the drainage ditches in hopes of diverting water off the trail. After a few minutes we gave up and hiked on. 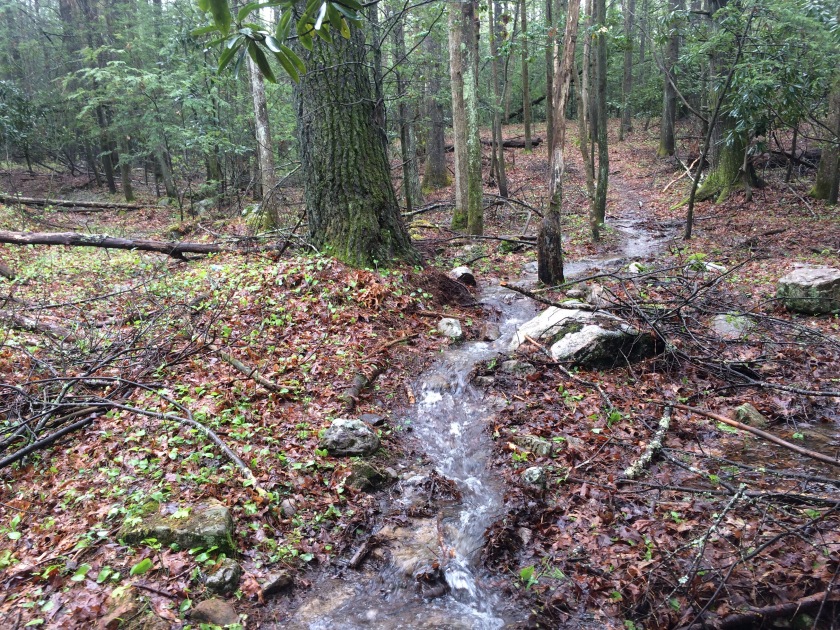 After crossing Stony Creek, the AT rapidly climbs in elevation – about 1,200 feet in less than a mile. I started my climb at a slow, steady pace. I was feeling very good, despite my wet feet.
We eventually made it to Bailey Gap Shelter about 5 miles up trail from The Captain’s. While it was too early for lunch, and not sunny enough to dry anything out, we ate a quick snack before heading on.
We made our way to the top of a rock ridge and hiked along jagged rocks. While the terrain was substantially drier, my having wet shoes and socks made the goings slow. As I hiked, I noticed the clouds parting and blue skies showing through. I took off my pack cover and hung my wet socks on the outside to start drying.

About an hour later, we were hiking in full sun. I had no way of knowing how long it would last. Even though we had only covered nine miles, we stopped to eat a hot lunch and dry out.
I immediately took off my shoes and put on my camp shoes. I put on my last pair of dry socks and spread all four wet pairs (two liners, two Darn Tough hikers) out on a rock to dry.
I pulled out my tent and gave it a good shake before splaying it out over some bushes. I even put on yesterday’s wet t-shirt and shorts knowing that they’d eventually dry if I wore them in the sun.
Even as I cooked lunch, I kept turning my tent, rainfly and footprint to make sure they got dry. About 45 minutes later, our sunny window started to close – more grey clouds were moving in. But it didn’t matter. Worse case scenario, I’d be able to climb into a dry tent at the end of the day. I strapped all four pairs of socks to the outside of my pack and hiked on.
At VA 613, I ran into trail magic. Someone tied a trash bag filled with snacks to a tree. Under a layer of empty Gatorade bottles, I found a honey bun and a small bag of peanuts. Good job!
After the rocky ridgewalk, the AT drops in elevation towards War Spur Shelter. I stopped at John’s Creek to refill water before heading up Kelly Knob. Right away, I knew this was going to be a tough hike. There were no switchbacks – the trail went straight up. 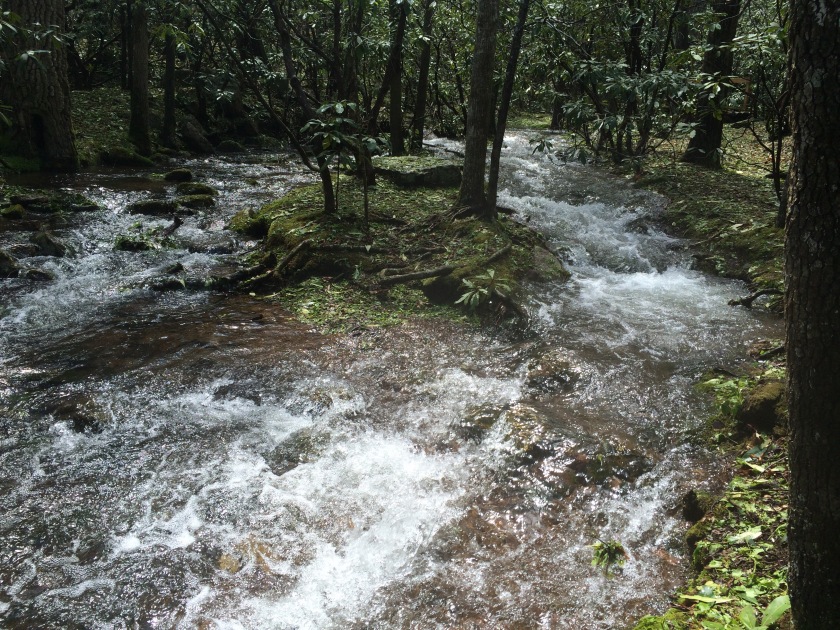 Savage and Black Santa quickly moved ahead. About halfway out, I stopped and sat down. My feet were killing me. It wasn’t the blister on my heel – that had been doing fine all day. It’s like my feet were sore from being wet.
I let them dry in the breeze for about 15 minutes before putting on fresh socks. It made a world of difference – I could tell right away that I was hiking better. I ate a quick snack at the top of Kelly Knob before moving on.
As I did, Oriole caught up to me. He was pressing for the Laurel Creek Shelter to tent for the night. Juan and Sweet Pea were also heading there – I probably won’t see them until I get to Daleville, VA. He also told me Monster wanted to catch up to Savage, Black Santa and myself – he wanted to sleep under the Keffer Oak as well.
It was nice chatting with Oriole – he gave me some good advice should I venture into Washington D.C. when I make it to Harper’s Ferry, WV.
I began the gradual descent towards the Keffer Oak. Near the Laurel Creek Shelter, the AT gets back to the nice grade I’ve become accustomed to. Having checked my AT Guide and app numerous times throughout the day, I knew that if I could make it out of the woods and into the valley, I’d be close to my destination for the evening.
At 5:00pm, I emerged from the woods into a beautiful green pasture. For the second time today, the clouds parted and the sun shined down. I paused for a few minutes to take it all in. I also ate some snacks. 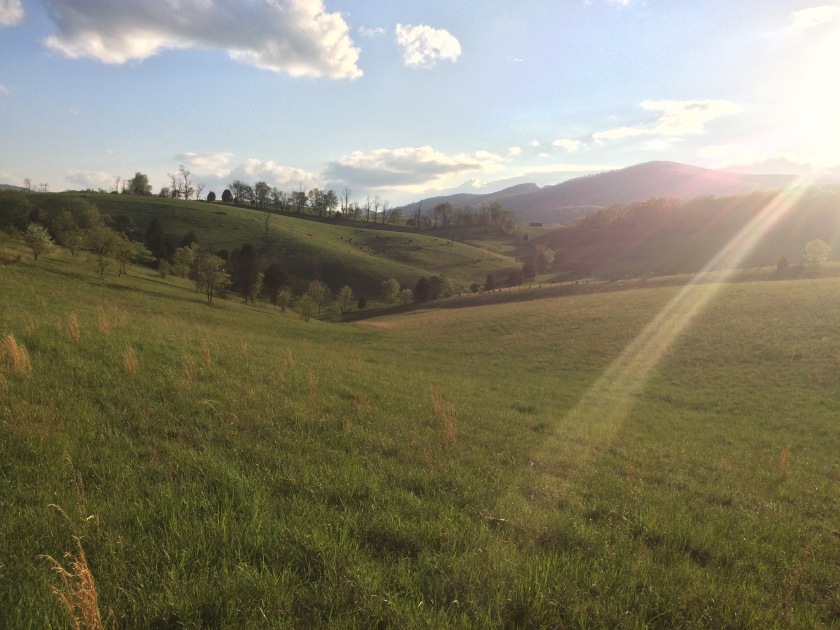 As I slowly made my way up and over several rolling pastures, I kept stopping to admire the mountains on either side of me. It was late afternoon and the light was just right, almost at that amber glow. It was truly stunning.
In time, I found Savage, Black Santa and Monster relaxing in a field at the edge of the woods. As I approached, they stood up and the four of us hiked the mile or so up trail towards the Keffer Oak.
The Keffer Oak is a massive, old tree. It’s over 300 years old and is 18 feet around. I pitched my tent in the setting sun and made a quick dinner.

I was last in my tent tonight and started typing by headlamp.
I’m really glad I made it here – I was hoping for cell coverage, but no dice. It’s my mother’s birthday and I wanted her to know that I chose to celebrate it by sleeping under an ancient tree – I thought she’d like that.

Tomorrow looks tough. I’ve got at least three ascents I’ll need to tackle if I want to keep this 20 mile per day pace going. I hope to tent close to the Dragon’s Tooth – it’ll be cool to see this giant stone monolith in the early morning light.
While it sure looked like rain all day, we only got a few sprinkles. My socks are nearly dry after hanging from my pack all day and my shoes are pretty much dry as well.
Tonight there was talk amongst Savage and I about getting in and out of Daleville quickly rather than staying a night. I really want to go to Trail Days in a week and a half and feel like I need to put in some good miles before taking two days off.
Black Santa is from Colorado and works for a popular gear manufacturer. He’s been to Trail Days and really recommends we attend. There’s free food, free gear, free repairs – plus it’d be a great way to connect with other hikers. Most hikers I’ve met are looking for a means to get there – if I go, I’ll rent a car so I can get in and out (quickly if necessary).
I’m really sore, but noticed a world of difference in my hiking once I changed socks. I need to do this more often. The only gear I’m planning on buying in Daleville is new socks – it’ll be my first trip to a proper outfitter since Damascus.
Oh, I slipped and fell today. It was my first fall. I’ve slipped plenty of times, but my butt, legs or pack never hit the ground. Today I ended up on all three in the mud – my pack took the brunt of it. I was fine.
Breakfast: peanut butter cup trail mix, protein bar, one peach soda, one Mountain Thunder
Snack: beef jerky tortilla roll ups
Lunch: Kraft Mac and Cheese with tuna and Hot Blackening seasoning, 2 LD PB cakes
Snack: Honey bun, small bag of peanuts
Dinner: Creamy Chicken Pasta Side with a can of chicken (much better than the bagged stuff) spiked with nacho cheese instant mashed potatoes