I woke up at 6:00am and started packing right away. I was feeling great and ready to get moving. I could hear Savage, Shaggy and Black Santa packing up from within their tents as well. I retrieved our bear bags and finished breaking camp.

I pulled out my Bluetooth speaker and played music as the four of us finished packing. Last night, we passed Juan, Sweet Potato and Oriole’s camp as we made our way to Angel’s Gap. This morning, they were up first and waved as they passed our camp at 7:00am. Fifteen minutes later, the three of us were on the trail as well.

The weather was cool, but not cold – a far cry from the frigid temps that convinced me to stay the night at Four Pines Hostel two days ago. The four of us stuck together as we made the five mile hike into Daleville.

We followed the same ridge that gave us yesterday’s views from Tinker Cliffs. The rock formations stayed impressive as we passed Hay Rock and made the gradual descent towards town. 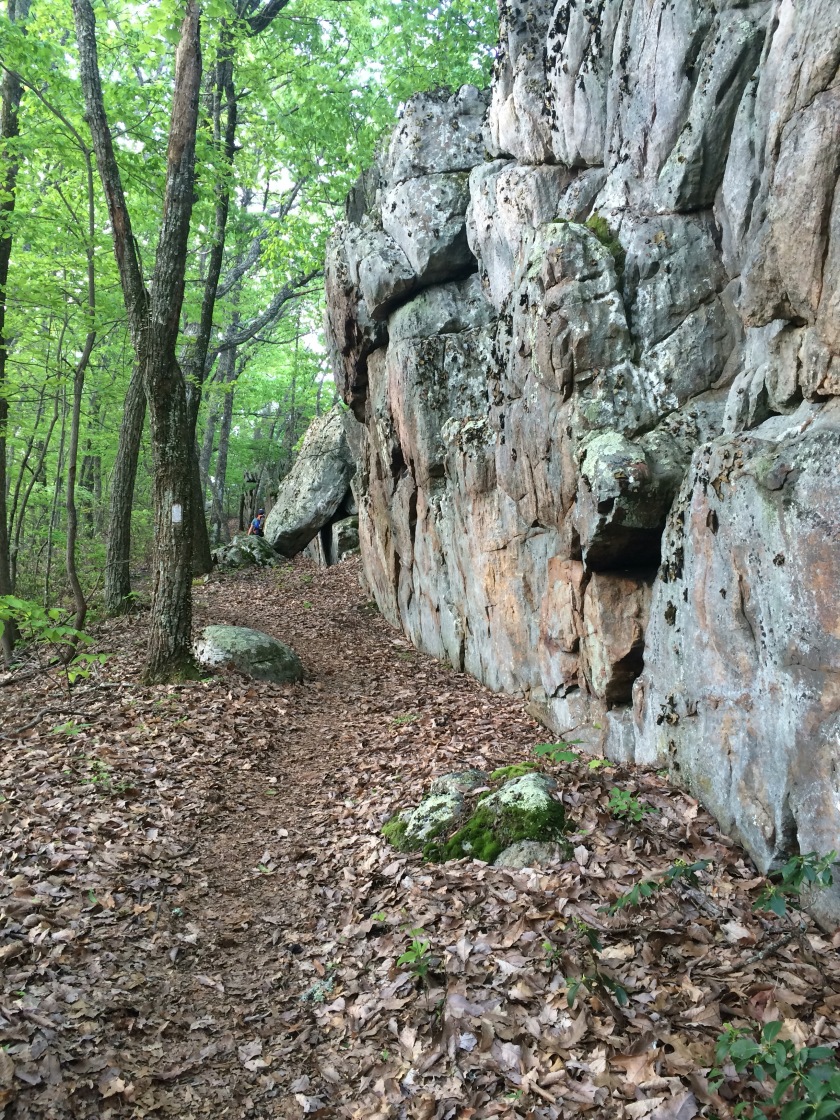 The trail was well-graded and we soon caught up with Juan, Sweet Potato and Oriole – Savage, Shaggy, Black Santa and myself were motivated to get into, and then straight out of, Daleville as soon as possible.

Before we knew it, we were emerging onto US 220 – a major road crossing and entry point into Daleville, VA. We turned and headed to the same shopping center that I visited two days ago when we took the shuttle to the post office and outfitter.

I went straight to Kroger for my food resupply. Savage, having already picked up her mail drop, hung out in the local coffee shop while Black Santa and I shopped for food. After a quick stop at the outfitters for more fuel (and so Black Santa could pick up a new phone), the two of us walked to Three Pigs BBQ with packs and shopping bags in tow.

Shaggy caught up to us in the parking lot – his uncle had arrived to pick him up for a few days off in Roanoke. He still doesn’t know Medicine Man’s gonna pick us up and take us to Trail Days in a week. Shaggy’s planning on being back on the trail Monday morning and was concerned about meeting up with us. Shaggy – if you’re reading this while at your aunt and uncle’s house, then “surprise” – Trail Days is taken care of.

I sat on the patio in the corner and ordered lunch. While I waited, I payed bills and started organizing my resupply. In time, Black Santa and Savage joined me.

When I first arrived at the BBQ restaurant, it was 11:00am and mostly empty. I finally finished eating and packing at 1:00pm and left in a hurry as the patio was starting to fill. I was apologetic as I made my way outside with a full pack in tow – and I was surprised by the number of “good lucks” I got from folks as I left. Compared to Pearisburg, Daleville is great little town.

Our full bellies and the warming temps made staying at the Howard Johnson very tempting, I’ll admit, but we suited up and made the short walk back towards the trail. Upon re-entering the woods, I came across a pair of hiking boots someone tied to a tree instead of throwing away.

I untied the boots and strapped them to my pack. Personally, I don’t litter and will often pick up trash as I’m hiking. I carried the boots for about a mile, leaving them on the guardrail near the I-81 underpass – I figured they had a better chance of getting thrown away there than they did when they were lashed to a tree.

After a short break in the shade of the underpass, the three of us hiked on. I quickly fell behind – my pack was about as full as it’s ever been. I took advantage of being alone to make a quick call to Medicine Man. I caught him as he was doing trail magic at McAfee Knob – burgers and cold drinks for other thru-hikers. We confirmed our plan to meet tomorrow at Jenkins Creek.

Our goal today was to make it up and over Fullhardt Knob before making an early camp. Before actually beginning the 1,200 foot ascent, the trail meanders through a small private pasture. I could see rain clouds looming in the distance.

Sure enough, right before I began the ascent, rain drops started falling. I busted out my pack cover and hiked on – it was still too warm to put on a rain jacket. Thankfully, the shower was light and brief – a total false alarm.

As I hiked up, I noticed subtle changes in the vegetation that I hadn’t yet seen before. Wild azaleas flanked both sides of the trail, replacing the rhododendrons I had become accustomed to seeing.

By 4:30, I reached the summit made my way to the shelter to gather water. Savage and Black Santa were waiting. Fullhardt Knob Shelter uses a rainwater cistern to collect water for hikers. For the life of me, I couldn’t figure out how to turn the thing on. Neither could Black Santa. Savage quickly switched the thing on and I filled up with four liters of water – we wouldn’t come across another source until tomorrow morning.

The four liters of water added another nine pounds to my pack – I was moving slower than ever. Thankfully, Savage and Black Santa quickly found a campsite and the three of us made camp.

I cooked a quick dinner and went to bed early – I want to start hiking at first light tomorrow.

I’m looking forward to tomorrow. Not only is there going to be guaranteed trail magic, but I get to hang out with Medicine Man. Summer’s doing fine – she has a little swelling in one of her legs, but should be trail-ready in a few days.

In order to make sure tomorrow’s secret trail magic goes off without a hitch, I told Savage that the US Forest Service built a gazebo for hikers at the road crossing. It worked – she really wants to make it the 22 miles to Jenkins Creek tomorrow.

At dinnertime, I got a text from Push. She’s hiking with a friend from Atlanta and is about 10 miles ahead of us. I might catch them tomorrow depending on how early I leave camp. Regardless, she knows about the trail magic tomorrow – hope to see them there.

Monster decided to spend two days with Juan, Sweet Potato and Oriole in Roanoke. He admits it’ll likely be the last time he gets to hang out with them. The four of them started the trail together, but Monster needs to put in big miles in order to finish the trail before his visa expires. None of them are planning on attending Trail Days – I hope to see them all in Waynesboro when I return from the hiker festival.

A few days ago, Black Santa pointed out that backpackers look like little T-rexes as they trudge uphill. I totally agree. I’m very reliant on my trekking poles when I ascend mountains – we’ve taken to calling my hiking uphill “T-rexing”. Now, even the “hiker crossing” signs make me think of T-rexes.

Assuming I’ll be leaving Jennings Creek Monday morning, I’ve got about 105 miles ahead of me before I hit Waynesboro, VA. I’d like to be there Thursday afternoon so I can shower, laundry and sleep in a hotel before leaving for Trail Days on Friday morning. That’s a lot of miles I need to cover. There’s a few 3,000-plus foot ascents along the way – we’ll see how it goes.

Daleville marks the first time I hiked into, and then straight out of, a decent town without getting a hotel room. Having already taken care of laundry and the post office two days ago certainly helped.

Today, I (once again) found myself thinking about life after the AT. And again, I came to no concrete conclusions as to what I’ll do, but I’ve got options and a few good ideas.

And I’m still having the time of my life.

Breakfast: Nope, I was ready to get into town.

About Dot’s Pretzels – they’re from North Dakota and are the best pretzels in the world. Between three hungry hikers, my two pound bag is almost gone.