I had my alarm set for 6:00am, but it didn’t matter. That same screaming bird woke me up at 5:00 and I never really fell back asleep.

It had rained overnight, nothing too hard, and was still lightly raining as I started packing up. I retrieved our bear bags and sat down in my tent to eat a quick breakfast. By 6:30, the rain hadn’t let up, so I took my tent down from the inside, leaving my rainfly up as a temporary shelter (a feature that should be a necessity with regards to setting up/taking down any tent).

By 7:30, everyone was packed up and ready to go. Savage took the lead, followed by Black Santa and myself – Push wasn’t far behind.

I hiked in a t-shirt and shorts, the light rain felt good as I marched quickly on the relatively flat terrain. The overnight rains brought low clouds that clung to the mountainside. 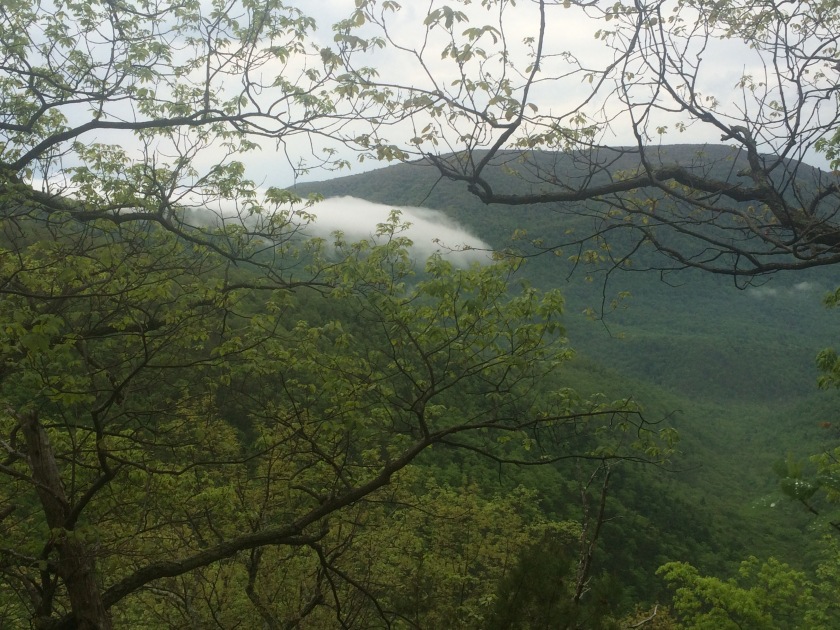 After about five miles of steady (and rapid) descent, the AT levels out and follows the James River for about a mile. We eventually crossed the river (via the longest footbridge on the AT). 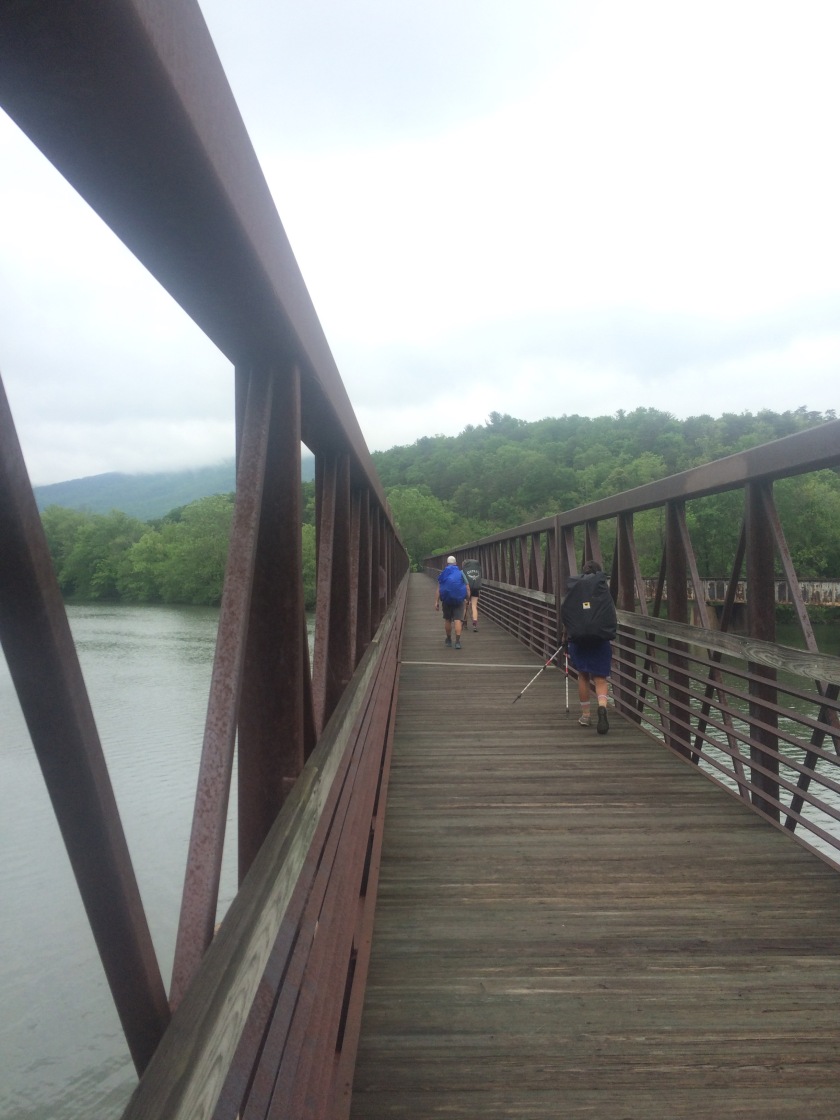 After a quick walk through the parking lot and mile hike through the woods, I came to Johns Hollow Shelter for lunch. Savage decided to press on – she liked the idea of taking some private time (as I did yesterday). Push, Black Santa and myself ate lunch and dried our tents in the field next to the shelter.

It was only 12:30 but we were already pressing on, having covered 10 miles for the day. “Ten miles before noon” has become a mantra with Savage, Black Santa and me – we rarely hit it, but when we do, it makes the rest of the day easier.

Push and Black Santa took the lead – I hung around the shelter for  a few minutes studying the AT Guide. I was starting to worry about Trail Days – it’d been over two days since I spoke to Medicine Man and his phone was still off. If he was no longer available to pick us up on Thursday, I needed to come up with a backup plan.

With storm clouds threatening in the distance, I began my ascent of Big Rocky Row and Bluff Mountain. The next seven miles were extremely difficult – whoever said “Virginia is flat” is a total liar.

I was sweating bullets the entire way up. The clouds broke for a brief shower as I topped Big Rocky Row and traversed the ridge towards Bluff Mountain. About an hour shy of the summit, I heard my phone ringing – I certainly wasn’t expecting this. I dropped my pack and went for the phone.

It was Moon Boots – he and Canuck had just made it McAfee Knob. He was calling to let me know he had spoken with Medicine Man, who was now home and undecided as to whether he’s returning to the trail. Our conversation was brief – I told him I’d see him at Trail Days before hanging up.

This is a huge bummer. I certainly hope Medicine Man decides to keep hiking – I’ll suspend speculation until I talk to him firsthand.

I eventually summited Bluff Mountain, apparently just a few minutes ahead of Savage and Push – Black Santa had been relaxing for at least a half hour by the time I arrived. I sat to eat some snacks – I also needed to bring up the possibility we no longer had a ride to Trail Days.

So why is it so important I make it to Trail Days? For starters, it’s a festival that caters to me – the AT thru-hiker. In addition to the free food and numerous drum circles (not my thing, assuredly), nearly every major gear manufacturer will be on hand for repairs and possible replacements.

And I’m admittedly hiking with some gear failures I haven’t mentioned yet. Yesterday, I broke the tip off my trekking pole and, earlier today, I blew out the side of my trail runners I had just gotten used to.

Additionally, getting off trail for Trail Days means I get to go to an REI to finally return my busted tent and ill-fitting backpack (I’m no longer a Gregory size medium).

While Push is pushing on (she’ll be getting off trail in Harper’s Ferry for over a week) – Savage and Black Santa are also looking forward to Trail Days.

I broke the news that we may no longer have a ride. Savage and Black Santa were also disconcerted to hear that I hadn’t been able to get in touch with Medicine Man. We dove into the AT Guide and started making a plan.

The only possible road crossing ahead that afforded both a hotel and a place to rent a car lay a mere 13 miles ahead – the trail ahead looks remote before hitting Waynesboro.

Fog (not haze) rolled over the summit of Bluff Mountain as we deliberated our options. It was decided that we’d hike hard the rest of the day and go into Buena Vista, VA first thing tomorrow. 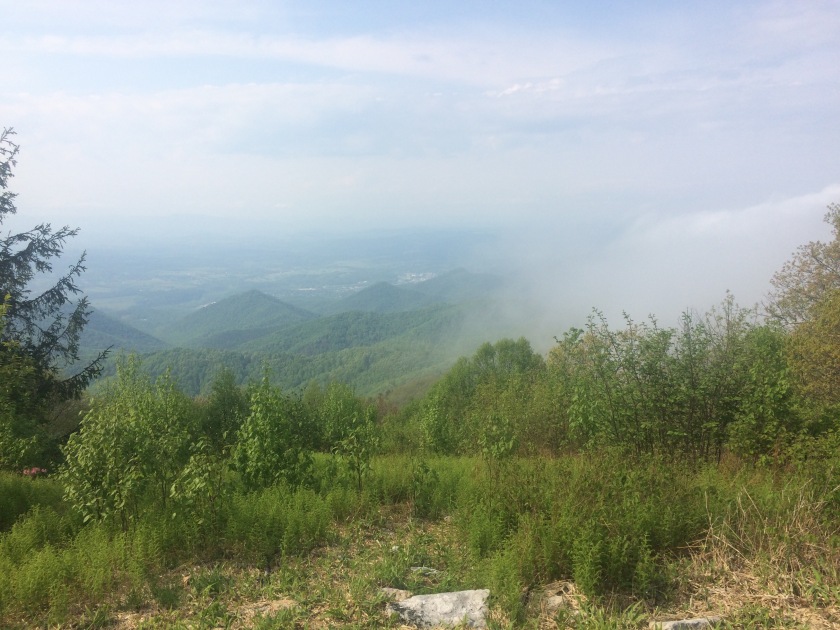 Savage set a small goal before we even started hiking today – she wanted to make it to the 800-mile mark. By the time we started hiking again, it was nearing 3:00 – Savage led the way.

Leaving Bluff Mountain, the trail descends rapidly towards the Blue Ridge Parkway at Punchbowl Mountain Overlook. I hiked quickly, trying to keep up with the others.

(Why am I always perpetually behind? Answer: I got my camera working again. I try to take double photos, one with my iPhone (for use here) and one with my Sony. It really slows me down.)

I emerged from the woods to find Savage, Push and Black Santa enjoying trail magic – again, it came from Tortilla’s parents. It was almost like seeing old friends. Tortilla’s mom had a Dr. Pepper waiting for me as I walked up.

(I met Tortilla briefly at the Four Pines Hostel – if I ever see him again, I’m buying him dinner.)

After stuffing our faces, the four of us hurried on – I could hear thunder rumbling in the distance. We continued our descent – Push and Savage paired off and went ahead, Black Santa and I lagged slightly behind. 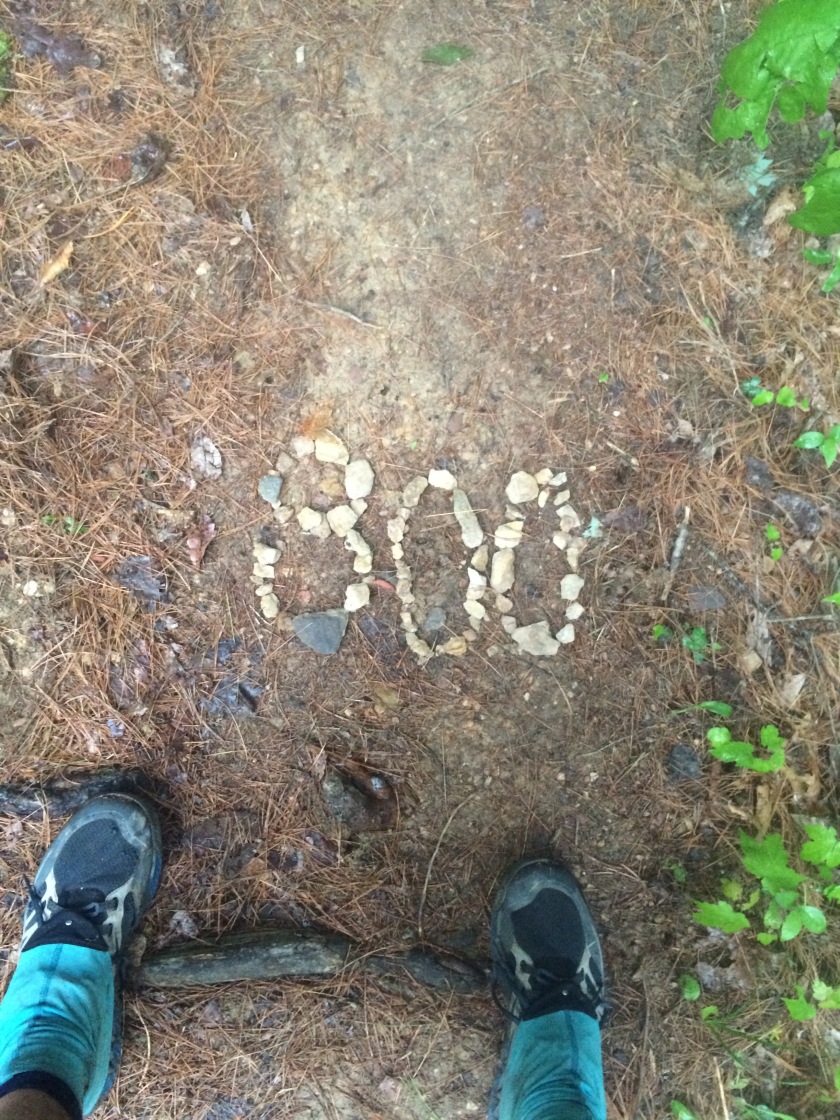 After a water refill, the four of us pulled out our headlamps and started looking for a possible place to camp. It was nearing 8:30 and getting dark when we finally stopped at an unmarked stream crossing and made camp.

Savage hung our food bags (Tortilla’s parent’s trail magic essentially served as dinner) as I washed my feet in the stream. I saw a huge salamander and screamed, but couldn’t get to my phone or camera to take a photo.

The four of us talked about our plans moving forward before going to bed.

Tomorrow morning, Savage, Black Santa and myself will make the short five mile hike to US 60 and hitch the nine miles into Buena Vista, VA. From there, we can rent a car Thursday morning, drive to REI in Richmond, VA, turn around and pick Shaggy up at a road crossing, then drive the four of us to Trail Days in Damascus.

We’d depart Satuday evening (theoretically – might be Sunday morning), drop Shaggy off, return the rental and then restart our hike towards Waynesboro.

As far as Push is concerned, she’s gonna slow her pace in hopes we reunite before she reaches Harper’s Ferry.

I’m going to bed with a light rain falling on my tent. I’m don’t like the idea of taking this many days off, but I’ve always wanted to go to Trail Days (from back when I was reading trail journals years ago).

When I look at the miles I’ve hiked since leaving Damascus, I feel better about taking a few days off. Even with the double zero in Pearisburg, the three of us have been going hard ever since. As far as my own calculations go, I’m almost ahead of schedule.

I am very exited to go to town tomorrow – I haven’t slept in a proper bed in 8 days (I think) and I’m bathing in creeks because I smell so bad.

I would highly recommend this experience to anyone.

Snack: the rest of my hybrid trail mix

Lunch: chicken ramen with tuna and instant mashed potatoes. Half a bag of beef jerky, the rest of my gummy worms.