Note: I’m writing this from camp on Sunday night. And thanks to McDoubles for sending me his pics so I could use them here.

I woke feeling refreshed. A light rain had fallen and I was dry. It was pretty cold outside. I checked my phone – it was working fine, but the screen was a little foggy. I put on the awesome sweatpants and sweater combo I bought from Wal-mart and set off for the toilets.

I returned to camp and found Shaggy and Black Santa mulling around. I ate a lot of food yesterday – there was so much I couldn’t remember it all. It seemed like every couple hundred feet I’d run into someone cooking something.

I hoped today would be similar. We left camp heading in the opposite direction of Mellow Camp, crossed a few streams, and wound up in Riff-Raff, another hiker camp. These guys were great – they pretty much pulled us off trail to bring us over to their breakfast spread. I stuffed myself. We left with a parting gift – Riff-Raff wristbands (we’re Trail Days “Royalty” now).

After breakfast we wandered over to the gear vendors, hoping to enter more contests. I renewed my subscription to the ATC and bought some baked goods for a snack. Shaggy and I tagged our spots on a giant elevation profile posted for hikers by the folks from the AT Data Guide. 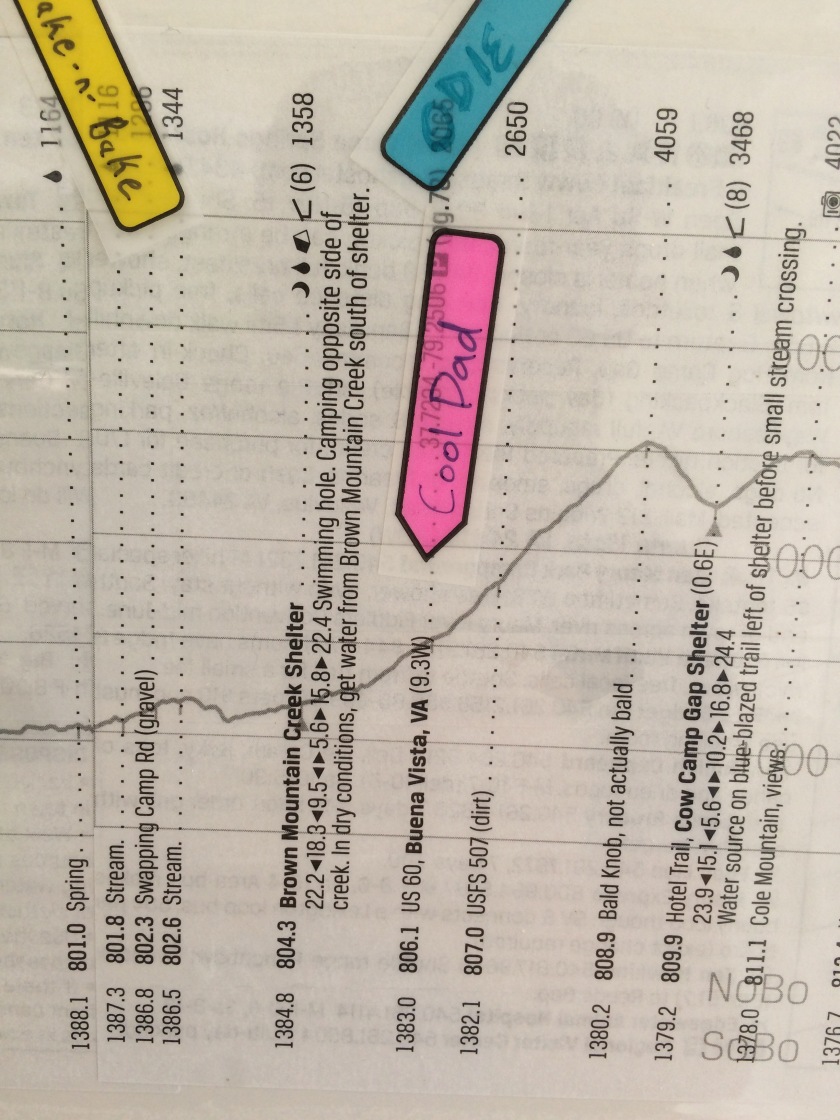 I was able to make a few calls when, on my way back to camp, my phone slipped out of my hands – and right into a small stream. I grabbed it quickly and turned it off just to be safe. It went back in the couscous.

Note: I really can’t believe I haven’t had worse luck with my phone – today was certainly an exception. Lots of hikers are on their second phones already. Black Santa just cracked his screen and will be on his third phone in one month.

I decided to head downtown. Leaving the vendor area, I turned north on the main street in town, once again following the AT. I was looking for Push and Savage – they were headed to the hiker parade. I made it to the staging area and wandered through the crowds of hikers looking for a familiar face.

The staging area was kind of neat. Different classes of hikers lined up under banners proclaiming the year they through hiked. I still couldn’t find anyone and decided to leave before the parade itself got started.

I started heading back to camp when I ran back into Shaggy. He had been at the library charging his phone. He told me he made a decision – there were too many Shaggy’s on the trail and he wanted a new name. I had been telling him he should be called “McDoubles” for a while now and was pleased to hear he wanted to start going by that.

As the two of us walked down the street, we noticed more and more people were lining the sidewalks. Police officers had starting blocking traffic for the parade – we took advantage of the clear streets and kept walking along.

Pretty soon, it became evident that the parade had started several blocks behind us – I could see flashing lights and could hear cheering. In a way, Shaggy and I ended up in the parade after all, just at the very, very front.

We turned off the road and headed over to the gear vendors once again. We ran into Black Santa – he was waiting near the Backpacker magazine raffle. It was the last raffle of the day and one of the best by far.

The three of us sat behind the tent with Champa and Get Wierd (apparently they’re tenting near us). The sales rep starting calling hiker names – he was giving away some awesome gear. He held up one of the grand prizes – a new Deuter pack stuffed full of free gear.

At first I was confused – he called “McDoubles” and Black Santa started screaming. Then it dawned on me – Shaggy, I mean McDoubles, just won! I was pretty happy for the guy.

The three of us started tearing through his pack when I heard the sales rep call out “Cool Dad” – I was the next winner. My prize wasn’t nearly as cool as McDouble’s, but it felt pretty good to win.

The three of us headed back to camp to check out our stuff. Earlier in the day, the sales rep from Gregory (that same guy I met on Max Patch) gave me a Gregory day pack. I had piles of stickers and small hiking stuff (carabiners, Chapstick). I played around with the water filter, titanium poop shovel, dehydrated meals, and pocket knife I won from the Backpacker drawing.

It was getting late and I was starting to get hungry. I walked over to the food vendors and bought a pound of pork and a sleeve of buns. I also grabbed a small pizza from a food truck and headed back to camp to eat.

After dinner, the three of us walked downtown with another small group of hikers tenting near us. We made our way to the pub and thoroughly enjoyed watching drunk hikers sing karaoke – it was well worth it.

We made our way back to camp to relax before tonight’s festivities got underway. I emerged from my tent to find Black Santa eager to explore. I told him all about getting lost last night and he assured me we’d stick together.

We wandered from camp to camp, hanging out at Riff-Raff and in Billville for a while. The owner of the Four Pines hostel had just gotten married and was having a huge party to celebrate.

There’s only so much Trail Days one can take. By 11:00 or so, the novelty had worn off – I was having fun for sure, but was getting a little tired from all the constant stimulation. I made my way back to camp and went to sleep.

Trail Days was overwhelming. I’m really thankful I went – I won a lot of free stuff. But it’s massive. I didn’t even visit half of the camps or have a chance to hang out with half of the people I wanted to. If I do return to represent the Class of 2016 or grill burgers for hikers, I’m definitely taking more than two days. 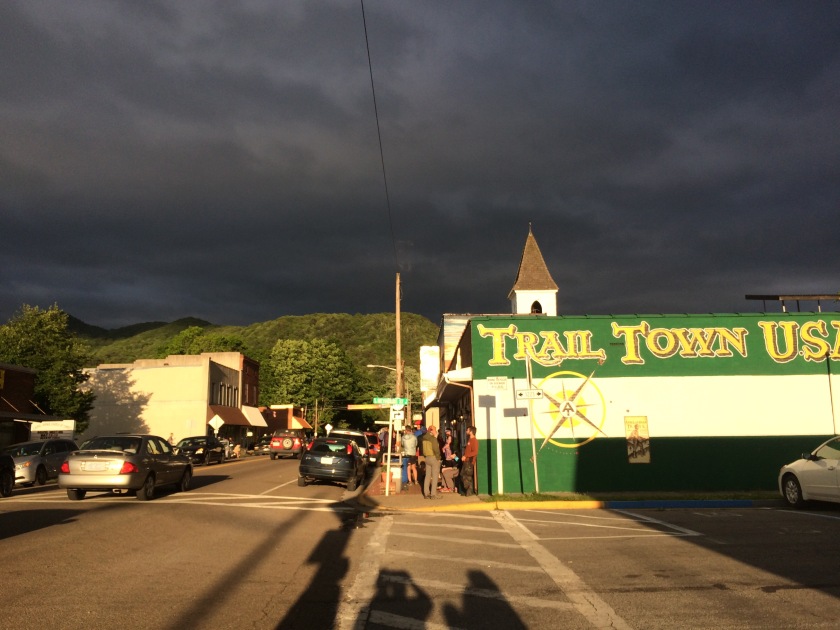