I woke at 6:30 and shuffled over to the bathroom to take a shower – I was still in a bad mood from the day prior. I just couldn’t seem to shake these bad feelings I’d been having about hiking. I didn’t want to get off the AT or anything like that, I just wasn’t excited about hiking out today like I normally would be.

After a long shower, I returned to my bed and updated the website. By 8:00, everyone was up. I finished uploading pics at 8:30 and joined Black Santa and McDoubles in packing up. We called for a shuttle back to the trailhead and were on the road by 9:30.

The gentleman who picked us up was actually the president of the Potomac Appalachian Trail Club. Instead of taking the winding Skyline Drive back to Big Meadows, he took us up a service road, handing Black Santa keys to unlock numerous gates along the way.

He dropped us off at the wayside – after a few quick purchases, the three of us set off in the fog, making our way back to the AT. McDoubles took the lead – Black Santa and I lagged behind.

I started hiking, slowing at first, but then picked up my pace within a few minutes. While it was still foggy and cold, I felt my mood improving with each step. The prospect of hiking today didn’t seem bad at all anymore. In fact, I was beginning to have a pleasant day.

I felt good – I mean, really good. My legs felt strong, my feet felt great. I was making great time too, arriving at the Rock Spring Hut at 12:30 for a hot lunch. McDoubles had just set down his pack and looked a little surprised to see me (I hadn’t been hiking this strong in a while). Black Santa joined shortly and the three of us ate. 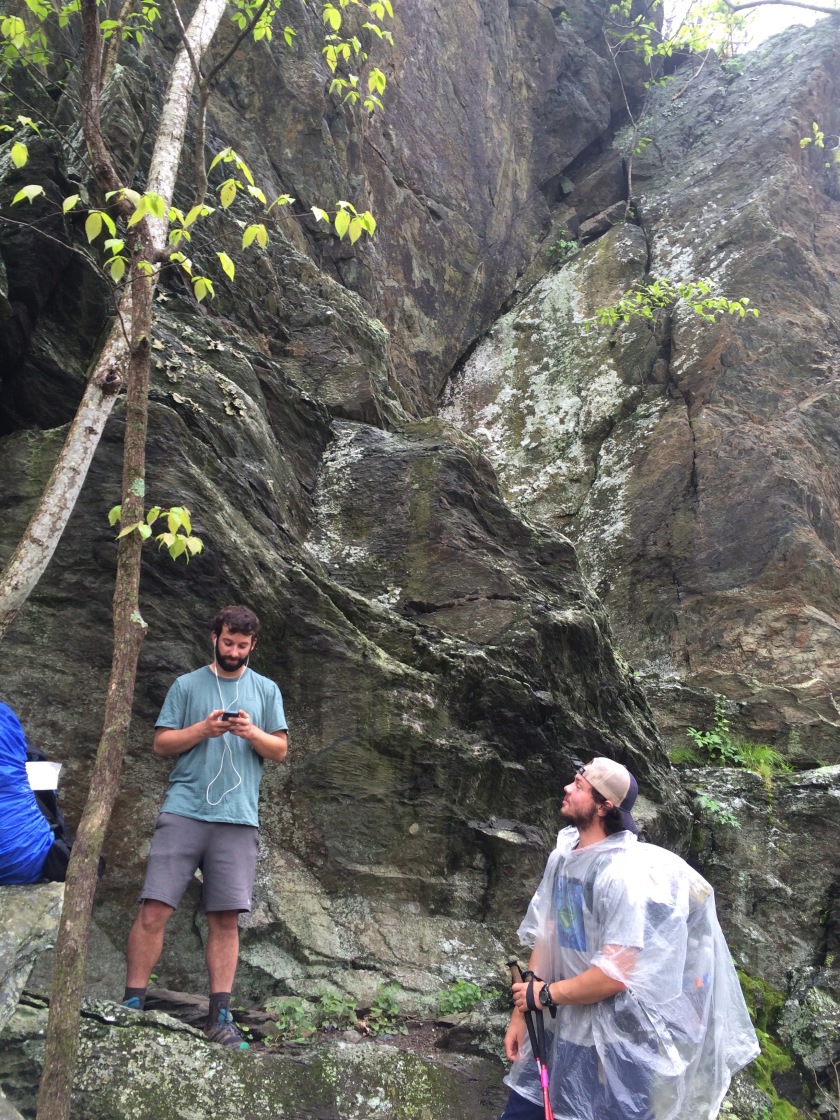 We were back on the trail by 1:30, heading for Skyland Restaurant four miles away. The Skyland Restaurant supposedly has the Taproom, a pub that’s friendly towards thru-hikers. I lagged behind, talking on the phone as I hiked, trying to organize a mail drop for Harper’s Ferry.

By the time I made it to the Taproom, Black Santa and McDoubles were seated at the bar. Black Santa was enjoying a pint and McDoubles a lemonade when I arrived. Earlier in the day, I spoke with a day hiker who’s planning to attempt a thru-hike next year. While I was using the bathroom, he apparently gave the bartender a wad of cash, telling him to cover our tab (which was admittedly small). I gulped water, tea, and then lemonade as I waited for Black Santa to finish his celebratory pint (I’ll get to that).

The bartender asked if we were hungry – always. He returned with bowls of soup – it was delicious. We left at 4:00, admiring the blue skies (finally) before setting off for the Byrd’s Nest #3 Hut.

I hiked strong – the weather was great and the trail was beautiful. About two miles from the hut, it started raining. I threw on my pack cover and starting making the climb up to The Pinnacle, hoping for a decent view. When I arrived at the summit, the rain had stopped and I was able to enjoy a stunning view of the valley to the west of the Shenandoahs – first great view I’ve had in a while.

I made it to the hut at 7:00 and quickly set up my tent. I walked over to the hut to cook dinner on the picnic table. I chatted with a few other hikers – got a chance to catch up with Bombadil and Gold Berry (I’ve been seeing this couple intermittently for at least a month now – really nice folks).

After dinner, I walked back to my tent to stow gear and returned to the hut to find hikers pointing off into the distance. I turned to look and there it was – a bear in camp. Awesome! 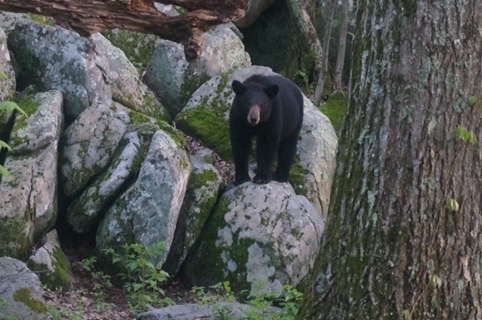 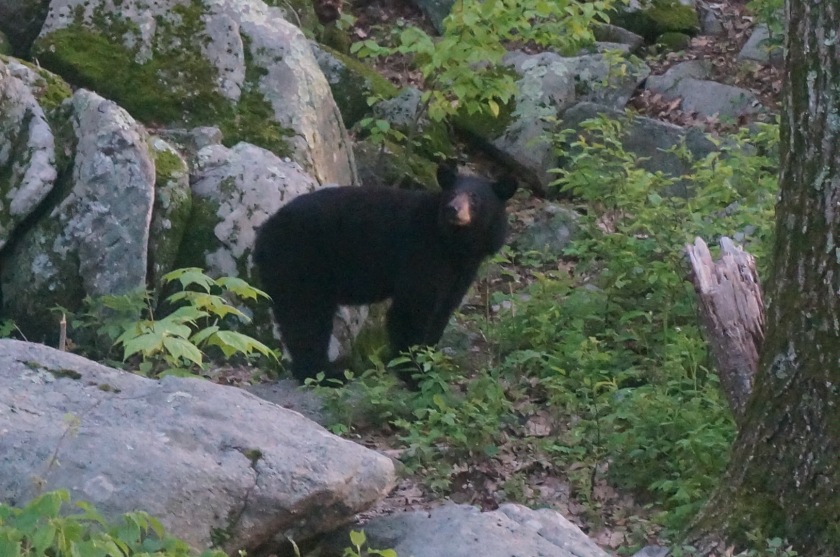 I grabbed my camera and started taking pictures. The bear ignored me for the most part – I did start to get a little too close and it made snorting noises before scurrying off. She returned a few minutes later, this time with cubs who stayed largely out of sight. I backed off.

After the bears left camp, I made my way to my tent to write.

What a great day! Not only did I get to see bears, up close and in the flesh, but I felt really good about hiking again. They call it the “Virginia Blues” and it happens to most hikers. Virginia is a long stretch with few things to look forward to. For me, the blues hit because of the weather. I can speak for Black Santa and McDoubles as well – hiking in the unseasonably cold and wet weather really took its toll on us.

According to the gentleman from PATC who drove us in this morning, 2016 is shaping up to be a record-breaking year with regards to the weather – it hasn’t been consistently this cold in decades nor this wet since 2012 or 2013. Good to know it’s not all in my head.

I neglected to mention that I did visit an outfitter while in Luray. I bought a new Thermarest Z-lite sleeping pad – the Coleman “space roll” stayed behind in the Best Western.

My plan for tomorrow is to hike as close to Front Royal as I can get. It’s about 30 miles away – I’d like to wake early on Wednesday and hitch into town for a quick resupply. Harper’s Ferry, home of the ATC and the symbolic halfway point, is only 54 miles past Front Royal – I hope to arrive by Saturday.

In Harper’s Ferry, I’ll hopefully get to take a commuter train to Washington D.C. From there, I’ll have an opportunity to return my tent to REI. Black Santa was able to get me a really nice tent for a good price through his brother.

I spoke with Moon Boots today – it was great hearing from him. I miss hiking with the guy. He’s nursing a sore ankle in Waynesboro and hopes to enter the Shenandoahs tomorrow. Canuck is still plugging along, apparently a day or so behind Moon Boots.

Savage is only a day behind – if I don’t see her sooner, we’ll definitely meet up in Harper’s Ferry. And Push is already in Front Royal – I’d like to catch up to her before she hops off trail at Harper’s Ferry for ten days.

So why is McDoubles now McDoubles? That’s my fault. He started the hike and received the relatively common name of Shaggy because he eats so much – McDoubles has consistently eaten like a champ since day one.

McDoubles sort of became a secondary trail name while we were stealth camping near Hampton – it was the day before the Watauga Dam wildfire. After meeting a day hiker who offered a ride into town, I asked (then) Shaggy if there was anything I could grab for him. I assumed he’d want a couple burgers or an ice cream. When he heard there was a McDonald’s in town his face lit up.

He wanted me to grab a Big Mac meal, 10 McNuggets and five McDoubles with Big Mac sauce. Sure thing Shaggy. I returned with his order (over $22, I remember) and watched as he ate. He was down to his last two McDoubles when he threw in the towel. It was a chilly night, so he placed them in his bear bag to have for breakfast.

Sure enough, I woke up the next morning and found him heating his McDoubles over his camp stove. And that’s when it popped out. He initially thought the nickname was hilarious and supremely fitting. But he was still Shaggy and would continue being Shaggy until deciding to change his trail name while at Trail Days.

And on Black Santa’s celebratory pint – while it’s been in the works ever since he decided to continue his section hike and finish the AT this year, Black Santa officially quit his job. Congratulations buddy!

I’m really glad to be back out here in the woods.

Lunch: Parmesan Pasta Side with tuna, handful of peanuts

Dinner: The other dehydrated meal I won at Trail Days – mushroom risotto. I spiked it with a can of Chilee flavored Beanie-Weenies.