Note: I’m posting this from my tent at Harper’s Ferry. Sorry for the delay – you’ll see why tomorrow.

I woke up at 7:00 and began uploading journals to my site – I was enjoying consistently good cell coverage for the first time since leaving Waynesboro.

After quickly packing, the three of us backtracked to US 522 to hitch back into Front Royal for a proper resupply. Again, we caught a ride surprisingly fast.

Note: The locals have been noticeably more accommodating to hikers starting in Buena Vista and continuing here.

I got dropped back off at the Food Lion and walked inside to grab enough food to last me the three days to Harper’s Ferry. Black Santa headed for the post office while McDoubles and I shopped.

After organizing my resupply next to firewood display on the sidewalk, I walked over to the Goodwill and dropped off my sweats and yoga pants – I’ll be getting my lightweight base layer in Harper’s Ferry and, with the forecast calling for temps in the the 80s, I think (hope) I’ll be fine until then.

It was hot and I was already starting to sweat – it was time for the floppy mohawk to go. I found a beauty salon and stuck my head inside to see if they cut men’s hair – it was empty and stylist quickly sat me and started shaving away.

There’s not much you can do with a floppy mohawk – I kinda have a normal haircut now (depending on the angle you view it from). I left the salon and headed back towards the Food Lion to wait for Black Santa and McDoubles.

It was only 11:00 and I was getting hungry. I walked across the parking lot to the Front Royal Diner and grabbed a booth. I ordered too much and ate it all. While I was eating, McDoubles shuffled in – he ordered a quick breakfast as well.

We ended up spending about two hours in the diner, charging phones and drinking coffee. Black Santa returned from the post office and the three of us left. (I got great service at the Front Royal Diner – highly reccommend eating here).

McDoubles needed to stay in town to make phone calls so Black Santa and I headed over to the side of the road to start hitching – in about ten minutes, we found ourselves back at the trailhead at 2:00.

Our plan was to hike 13 miles to the Manassas Gap Shelter, but we were moving slowly. Yesterday’s 30-miler left me feeling stiff and sore today. I knew I’d be stopping at the Jim & Molly Denton Shelter for a break – I’d read about it for years. Apparently it had a front porch with chairs and a solar shower – I was looking forward to that shower.

The trail was well-graded, but overgrown – I could tell I wasn’t in the Shenandoahs anymore. 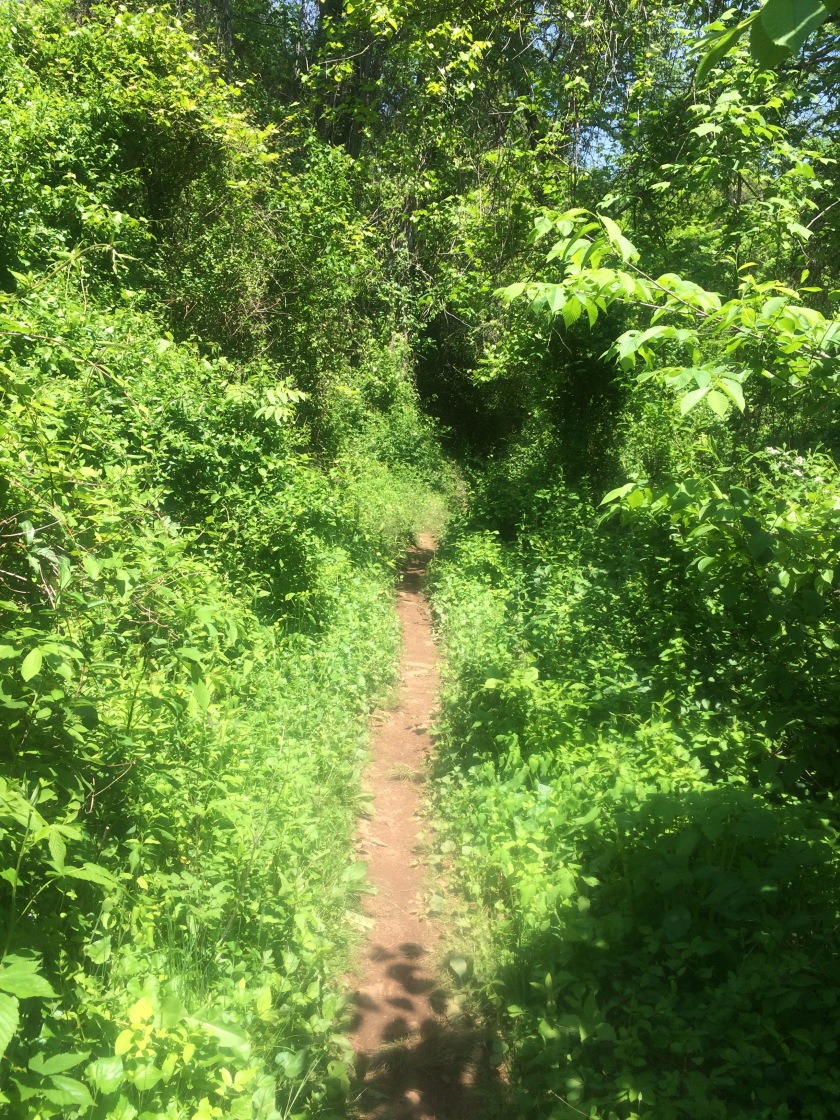 I was still moving slowly when I finally came to the Denton Shelter. I peeled off the AT and took the side trail down. Black Santa had spread his tent on the grass to dry in the sun and I sat on the porch to have a snack. He came over and said he wanted to stay here for the night.

Hmmm. I still wanted to take a shower and it was getting late in the afternoon, but I remained unconvinced. Then I saw it – a horseshoe pit. I don’t know why (I’ve never been much on horseshoes), but I was instantly excited to stay.

I quickly set up my tent and ran a clothes line to dry my sweaty shirt and socks before playing a few games with Black Santa. It was a real treat – we had a great time, even challenging Juan and McGuyver to a game or two.

I played horseshoes for about three hours – I almost ran out of daylight to take my shower. We stopped playing at sunset to make dinner – I packed in fresh veggies from town and wouldn’t be cooking tonight.

After a quick meal, I walked over to my tent to relax and ended up falling asleep. I awoke to darkness and a familiar laughter echoing across the camp. It was Savage – how in the hell did she already catch up to us?

I jumped out of my tent and walked over to her, now chatting with Black Santa. I didn’t expect to see her until Harper’s Ferry – good job, Savage!

Black Santa relayed a message from McDoubles – having left town hours after us, he stuck to the original plan and made it to Manassas Gap. Too bad – the Denton Shelter is the best I’ve seen so far.

After catching up with Savage (she ran into a bobcat), I returned to my tent to write.

There’s nearly 50 miles in front of me before I reach Harper’s Ferry. I need to arrive Saturday morning at the latest so I can visit the post office and ATC headquarters before hopping on an 11:00am Amtrak to DC. I’ll need to get an early start tomorrow.

The elevation profile looks tough in the days ahead. I hope to hit the 1,000 mile mark tomorrow night, maybe even tenting at the campsite located at 1,000.1.

If I do that, I’ll be starting the Rollercoaster tomorrow afternoon. The Rollercoaster is a series of pointless ascents and descents that follow each other in rapid succession for about 13 miles – it’s supposed to be tough.

And then I’ll hit Harper’s Ferry, WV, the unofficial halfway point of the AT, before hopping a train for DC. Hopefully, my tent will arrive in Harper’s Ferry before we depart – that way, I’ll be able to return my Quarter Dome 2 to REI.