Note: I’m writing this from the Amtrak back to Harper’s Ferry from DC.

It was just after midnight and I hiked on. I was hoping to find McDoubles – maybe he had a few extra batteries for my dimming headlamp. I stopped just after crossing the stream at Spouts Run Ravine.

My headlamp was nearly dead. I took it off and pulled out my solar light. I’ve never tried using the solar light outdoors – I usually clip it inside my tent so I can type late at night or pack early in the morning. It really worked great – for about ten minutes.

It was time for Plan C – my iPhone flashlight. I unzipped the front pocket on my Mammut hiking shirt and slid my phone in. It took a few minutes to adjust to hiking with my only source of light shining from my chest, but I got used to it. I hiked on with a renewed confidence in my decision.

Then it happened – bears. It happened to Savage just outside of Vandeventer Shelter and it was now happening to me. The bear was big and standing squarely in the middle of the AT. I clicked my trekking poles together a few times in an attempt to scare it away – it didn’t budge.

I froze. For a second, I didn’t know what to do. My heart was racing and I could feel the adrenaline rushing through my veins. I took a deep breath and screamed at the bear from the top of my lungs – I’m pretty sure I told it to “get away from me”, making sure to use every curse word I knew.

The bear took off running, crashing through the woods like some giant drunken toddler. Man, I felt ALIVE. I wasn’t scared at all – it was as if I reached a level of understanding with nature right at that point. The bear was just doing his thing and I was simply doing mine. We only met for a brief instant and, in that moment, I did what it took so I could continue doing my thing. No harm, no foul. With a renewed confidence, I hiked on.

I was nearing the end of the Roller Coaster and was still moving slowly. At 3:00am, I crossed into West Virginia. There was a small sign commemorating the event – my phone was too fogged up with sweat to take a photo.

Shortly after crossing the border, I found myself at Raven Rocks. The moon was a little more than half full, just enough to illuminate the valley below. I sat on the rock overhand and ate a snack. All of the stars were visible – the skies were that clear. I sat on the rocks for nearly and hour, counting satellites and lost deep in thought.

I noticed the skies to the east ever so subtly start to brighten and decided to hike on. It was a little after 4:00 and I had covered just under 30 miles for the day (well, day and night).

A mile later the Roller Coaster ended and the terrain leveled off – but it stayed rocky. My feet were really starting to hurt. If this rocky terrain is any indication as to what lays ahead, I’ll be looking at some low mile days in the very near future.

At around 6:30am I reached the side trail for the Blackburn AT Center – I thought it too early to visit and bypassed it. He sun was just starting to rise – I was finally able to switch off my iPhone light and dry it off, snapping a quick picture of the pink morning skies.

At this point in my trek, I had to substantially slow down. My feet were killing me. Every rocky step shot pains through my feet and ankles – I’m just not used to all this uneven terrain.

Two hours later, I paused at the David Lesser Memorial Shelter for  quick breakfast – it was empty. I guess the promise of reaching Harper’s Ferry had everyone excited and up early. I was starting to get a little excited myself. I guess that’s why I didn’t check to see how much water I had – I left the shelter not even realizing my Platypus was bone dry. It wouldn’t be until 9:00am (at 40 miles on the day) until I figured out my error.

I checked my map – there were no other water sources between here and HF. There was a road crossing ahead with quarter mile walk to a gas station – that would have to do. I felt what might be my second (or third) wind and hiked aggressively towards Keys Gap.

After a quick detour for water and Mountain Dew, I made my way back to the trail and hiked on. It was nearing 11:00 and HF was only four miles away. I stopped at a campsite to rest and watched as three or four other hikers passed by. After chugging my last Mountain Dew, I decided to make the painful hike into town.

I hit Loudoun Heights not even realizing that, as I made the rocky descent towards the Shenandoah River, I was leaving Virginia and officially entering West Virginia – there wasn’t a sign (or if there was, I was too tired to pay attention).

Before I knew it, I was crossing the Shenandoah and heading into HF. I had a huge smile on my face. Not only was I close to finishing this crazy hike, but I’d soon be visiting the offices of the ATC and receiving my new hiker number.

The trail leading up to the ATC as rocky and steep. I stumbled blindly over sharp rocks – I stopped caring about where I planted my feet. I was ready for two things – food and sleep. 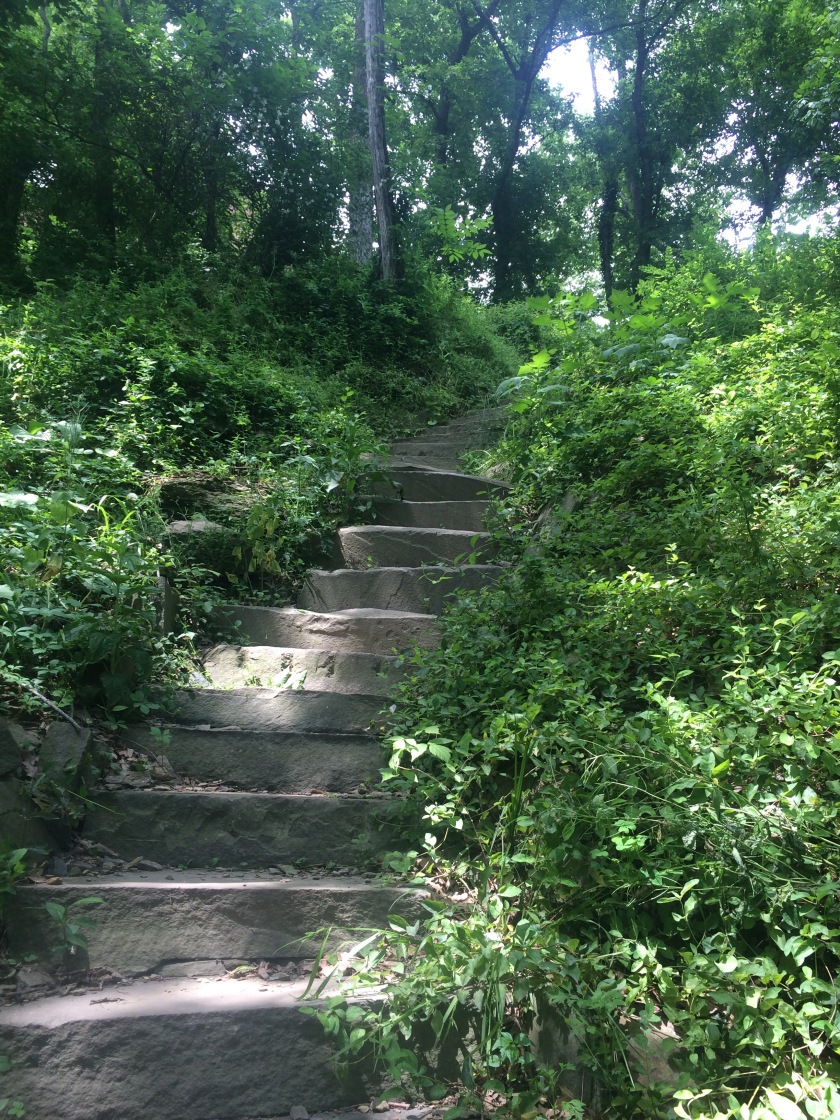 I entered the offices of the ATC at 1:45pm and was met by smiling volunteers eager to give me a tour. I hung out in the hiker lounge for a little while, meeting folks I had never seen before – I had night hiked clear into a completely new bubble of hikers. I got my photo taken and received my new hiker number.

I started this thing on March 10 as number 534 – it was now May 27 and I was surprised to hear I was the 344th northbound hiker of the year. I’d really moved up!

I left my pack at the ATC and walked down to the post office – I knew I had a few packages waiting on me. Sure enough, I picked up a few boxes (new rope, my extra camera battery, and my base layers from Granny, a huge bag of Dot’s Pretzels from Mom) and headed back to the TC to repack.

There’s not much to do in HF. I was hungry, but wasn’t willing to spend $15 on a cheesburger from the pub downtown. I couldn’t find the outfitter and ended up walking back to the ATC to secure a tentsite for the night. I decided to cook my emergency meal at camp.

The town of Harper’s Ferry had very recently opened a tenting area in the city park – it was a very nice gesture. I set up my tent and ate a quick meal. Finally satisfied, I checked my phone. McDoubles was still planning on making it to town tonight – Savage and Black Santa were hiking with Who Dat just a few miles behind him.

I told them not to expect much (or anything) if they were planning on arriving that late. I layed down in my tent and started to write (I didn’t finish – totally fell asleep mid-sentence, I’m finishing much of this post from the Amtrak).

Let’s see: 48.8 miles over 30 hours – I’m pretty proud of that accomplishment. When asked by other hikers where I started today, most couldn’t believe it when I told them I last slept at the Denton Shelter almost 50 miles away.

I’m a little concerned about my feet – every step kills me. I don’t have any blisters or hot spots so I think I’ll be fine.

And everyone caught up to me, but since I had been sleeping for hours when they got in, I’ll save that for tomorrow’s post.

I’m glad Black Santa and McDoubles committed to making it to HF before Saturday morning – the Amtrak for DC leaves at 11:30 and I still needed to hit the post office – I’m missing a package.

I can’t remember what I ate. Sorry.