I was up at 6:00am and immediately hit the shower. This suite at the Hilton is one of the nicest rooms I’ve ever stayed in – the shower alone was bigger than my entire bathroom back in Seattle. I spent too much time in there for sure.

When I finally sites the bathroom, Black Santa and McDoubles were already packing. I went to the lobby and grabbed a cup of coffee, drinking it outside in front of the Embassy of Senegal. I made my upstairs and finished packing – we were checked out and on the streets by 8:00am.

We immediately headed south from DuPont Circle and walked (yes, with our packs on) towards the Lincoln Memorial. The streets weren’t crowded yet, but barricades had been set up in preparation. I stopped to use the privy.

I didn’t realize this until now, but Memorial Day Weekend is a huge holiday for motorcyclists – many of whom in attendance were veterans. I walked past rows and rows of motorcycles before entering a cool vending area set up for the bikers. I ended up buying a few patches and a breakfast snack before continuing to the Lincoln Memorial. 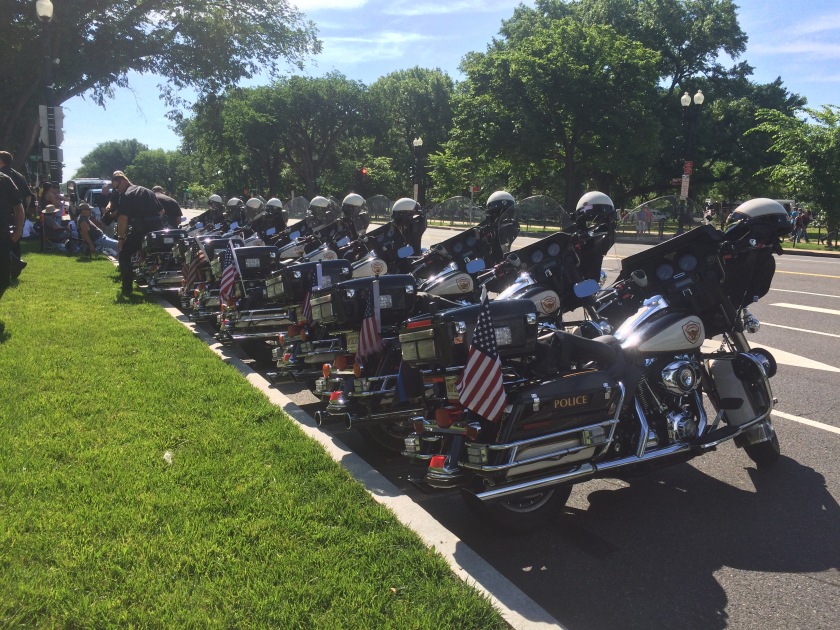 My mood was starting to change – it was never my intention to mark the unoffical halfway point in my journey by being in DC for Memorial Day, but I’m sure thankful I did.

I mean, here I am, backpacking in relative peace and security, crossing numerous state borders, without any real cares at all. I personally get wrapped up sometimes in all that’s wrong with this country – I often fail to recognize the things we do really well.

The Lincoln Memorial was a sobering experience – I wept. 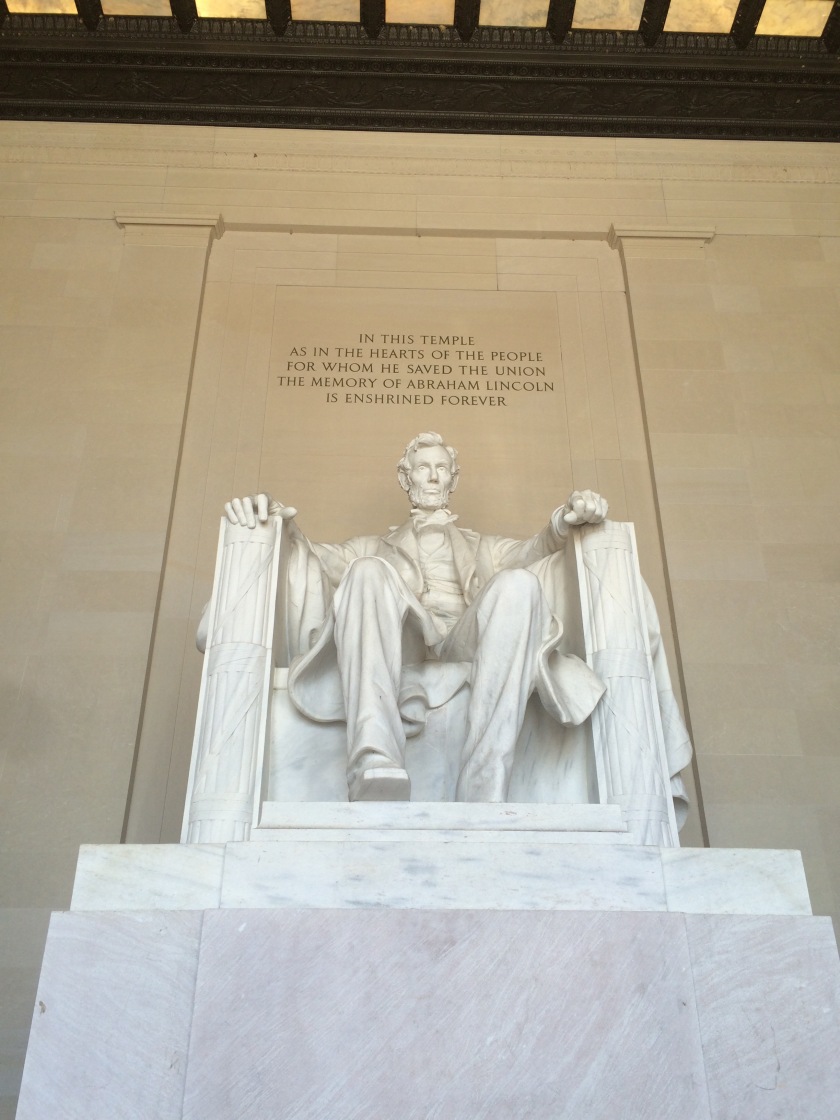 ﻿I put my headphones in and made my way to the Washington Monument – I found Black Santa wandering around and the two of us walked over to a row of food trucks to eat. 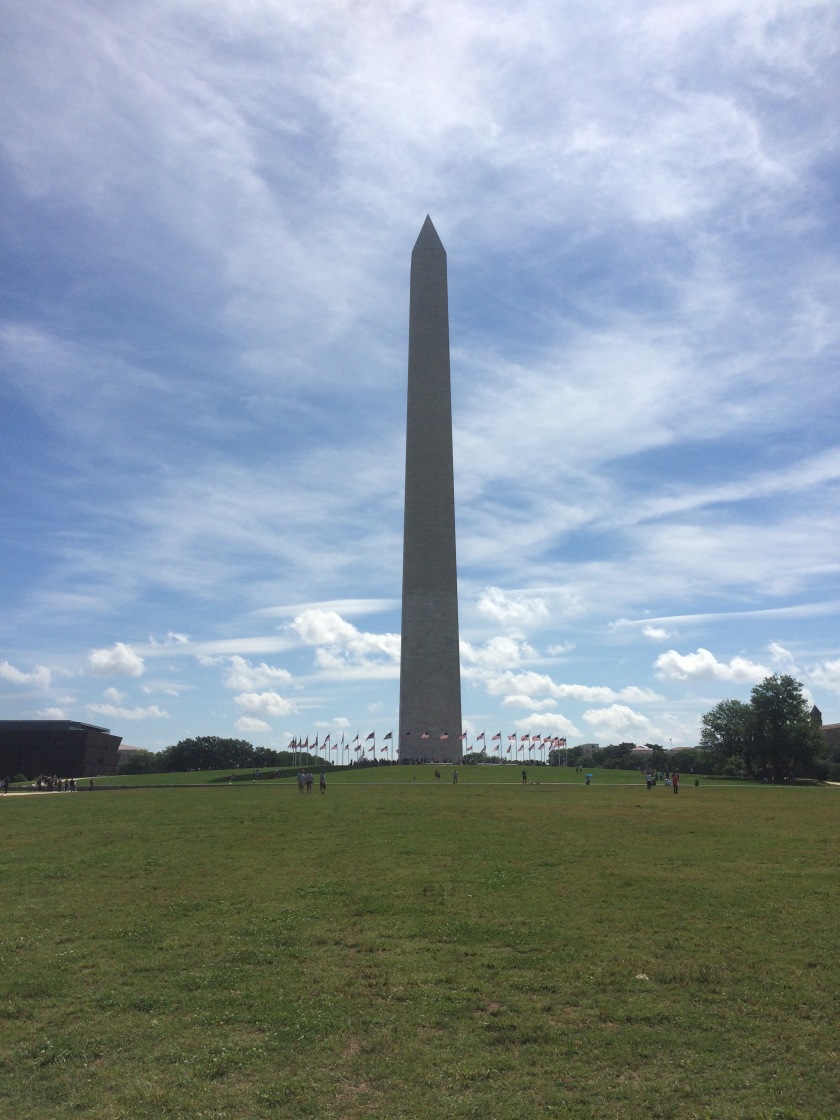 After a quick lunch, I found myself hot and sweaty – the low elevation and high humidity were really getting to me. It was here that I decided the beard had to go. It’s been fun, but my beard is too thick for the heat. As we headed towards (another) restaurant that supposedly had good oysters, I kept my eyes peeled for a barber.

After our second lunch in two hours, Black Santa and I found a shady spot in a grove of trees and waited for McDoubles to catch up. 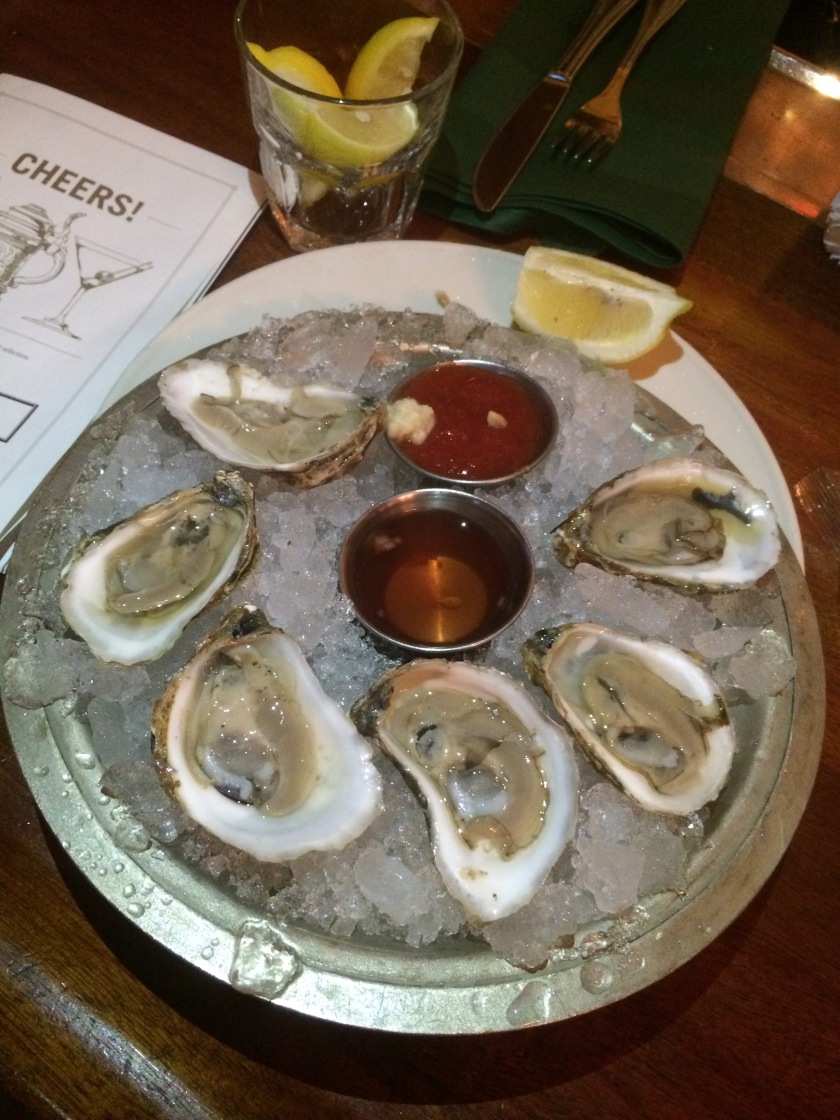 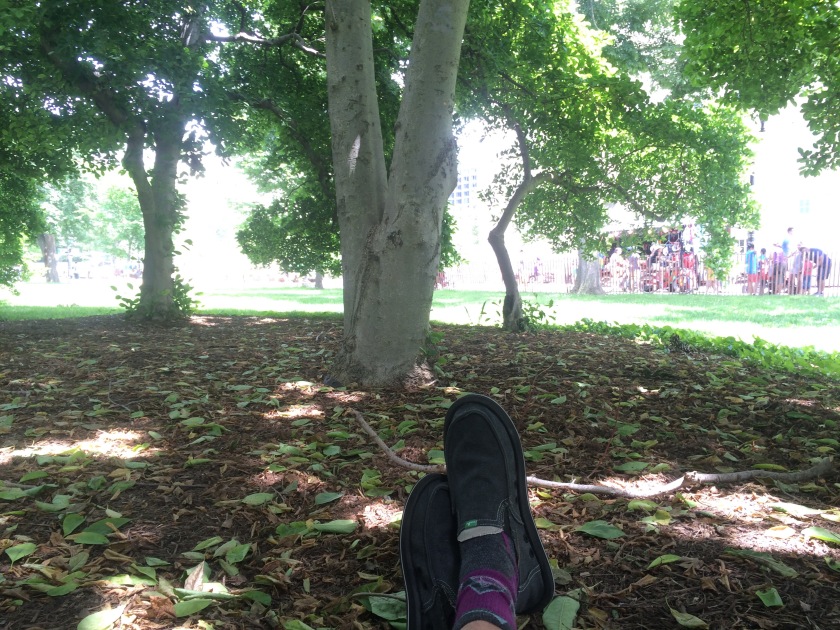 By this time it was nearing 3:00 – time to head back to Union Station. We boarded the train and soon found ourselves on our way back to Harper’s Ferry. We got off at 4:30 and walked into town. I stopped at the outfitter (finally found the place) and bought a few snacks to get me to Waynesboro, MD for my next proper resupply.

I backtracked to the ATC office and resumed my trek north on the AT. I got a message from Savage – she had gotten back in town hours before us and already was relaxing at a campsite a few miles up trail.

While Harper’s Ferry wasn’t the best town as far as hiker amenities go, it sure was beautiful. The AT crosses under the railroad tracks before hitting the C&O Towpath. This part of the trail follows the Potomac River – here I officially left West Virginia and entered Maryland. That’s five states down!
I met Savage, Black Santa and McDoubles at the campsite and sat to have a quick snack. Black Santa checked the radar and it looked like we had storms moving in – I noticed there was an underpass just a mile ahead. Black Santa and I jogged up to the underpass to make sure it would work – plenty of space!

We returned to the camp and relayed our find to Savage and McDoubles. In our absence, Champa hiked in – I first met him in Georgia and have enjoyed seeing him intermittently along the way.

The five of us suited up and made our way to the underpass. And just in time too – the rains started about 15 minutes after we arrived. I made a quick dinner and layed down to write.

I can’t believe I’m in Maryland. Virginia took what felt like an eternity to hike through.

Tomorrow, I might hitch into Boonsboro, MD and buy something nice to cook for Memorial Day.

I need to shave my beard off now.

And I have some news – I fell today leaving Harper’s Ferry. It wasn’t bad. The reason that this is news is because of why I fell. I’ve been suspecting it for a while, but my double vision is starting to return. When I got to camp I privately asked Savage if she’s noticed anything going on with my right eye lately – she confirmed that it was starting to drift out again.

Crap. I’ve already had two surgeries over the course of a year and didn’t think I’d ever have this problem again. I’m calling my surgeon on Tuesday to let him know. The only thing that worked in Seattle to eliminate the double vision was wearing an eye patch. I brought it just in case and wore it this evening.

It’s back. I’ll still wear sunglasses during the day – they’re dark enough to make my right eye essentially go dormant, but will need the eyepatch indoors and during the early morning/evening hours.